There are always smarter people than you in the room. Always someone better informed, someone who can see the angles in a situation more clearly than you and figure a way to take advantage of those angeles. That’s not false humility or low self-esteem talking. It’s a survival mechanism. If you assume people are smarter than you it makes you work harder and keeps your instincts since you’re pushing yourself to figure out what perspective someone else has already worked out.

The Big Short is about a group of people who figured out just such angles. Set just before the financial collapse of the mid-2000s, the movie, based on the book of the same name, tells the story of a group of individuals – played here by Ryan Gosling, Christian Bale, Steve Carell, Brad Pitt and others – who saw the collapse coming and decided to do something about it: Make money. These are the guys who created the now-infamous Credit Default Swaps and other “financial instruments” that destabilized the markets further than they already were. It’s directed by Adam McKay, whose previous work has mostly been in straight comedies like Anchorman, Step Brothers and more.

The teaser poster is all about symbolism. The main part of the image is a set of suburban houses literally underwater – a common term for a house where more is owed than the property itself is worth – along with the cast list and the title treatment.

It’s not bad and I like that they didn’t come right out of the gate with big pictures of the cast’s faces or something that otherwise traded solely on star power. Instead they were going for something that was more about the story and setting than about the cast, though their names are still plenty obvious here.

The theatrical one-sheet put the four male leads into arrows that come together for form a diamond-shaped empty space in the middle for the title treatment. I think what they’re going for here is something along the lines of “it’s all connected.” Either that or the designers just couldn’t figure out a better way to get all four guys on the poster in an organic way. It’s a decent poster, but this is a drama about money and finances so there’s very little that can be done to spice it up all that much.

The first trailer opens with Bale’s character in 2005 calling out the impending housing crisis that was about to explode the financial industry. We then see all the other characters who are either railing against the machine that’s taking advantage of the American people or making bets to profit off of the looming disaster.

It’s a pretty effective trailer that focuses on showing off the all-star cast that’s been assembled. It’s also clearly designed to be a kind of populist manifesto in that it looks like it will give voice to the rage people still feel over having been subject to an industry that used them to get rich. All the players get time to shine here, as does the fact that the movie is based on a book from the author of “Moneyball” and comes from Adam McKay, making his first foray into a non-comedy movie.

The second trailer starts off with a rant by Carrell’s character but it ends the same way, with Carell giving financial advice to a stripper. In between this plays much more like a heist movie than the kind of righteous do-gooder tone of the first one. It’s clear in this trailer that the group of main characters is out to profit off the banks’ greed and problems, not right some sort of wrong or exact a kind of vengeance.

It’s not quite as effective as the first one since the narration gets in the way to some extent. And despite giving a clearer (I’m assuming) picture of the character’s motivations it actually seems to show less of the story itself. Still good, but not quite at the same gut-punch level as the first one.

The official website for the movie opens with a mix of motion graphics and elements from the theatrical one-sheet.

The first section here is “Synopsis” which has a brief write-up of the film’s story that you can click through to read more. “Videos” has both trailers as well as a featurette focusing on McKay but also featuring the cast. 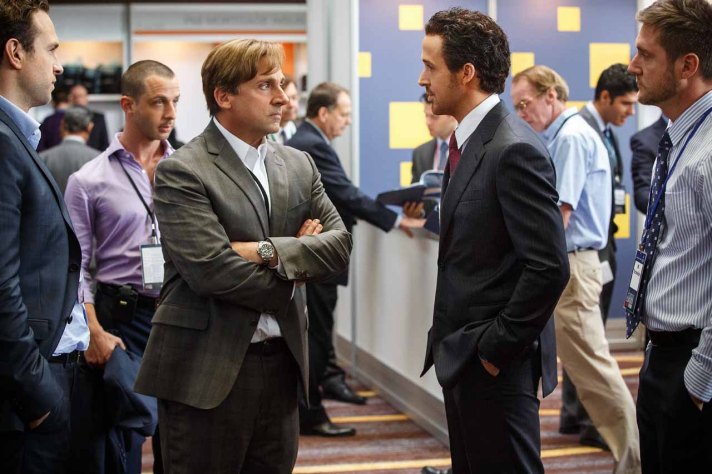 “Cast” just has images of the four main actors along with their names and the names of their characters. There are a number of stills in “Images.” Also on the site you can get tickets and sign up for updates.

There’s been plenty of advertising that’s been done on TV, online and elsewhere. TV spots were basically mini-trailers, each one containing different scenes from the trailers in different arrangements. They’re all designed to show off the story and the kind of jazzy attitude that movie seems to have and so work well to present a light, bouncy kind of drama that’s all about the performances.

The publicity cycle started right after the first trailer dropped, largely because the announcement it would be coming out in 2015 came as kind of a surprise to everyone, including McKay and the cast, who thought it was slated for 2016.

Michael Lewis, on whose book the movie is based, talked with the press about how he never thought a movie like this would get made considering the tricky subject matter and huge cast of characters. But, he said, after meeting with McKay he decided he was the right director for the movie and completely signed on to the project. McKay himself would also talk about how he managed to get the project off the ground both from a writing and casting point of view as he ventured for the first time outside the realm of comedy. The cast, particularly Gosling, talked to the press after the movie’s AFI Fest premiere about how it struck an educational tone and was at least in part meant to show the audience just how bad things were during the worst of the financial crisis. That screening also got the speculation running on whether or not it could make a serious run at awards consideration. McKay would talk about just how dedicated the cast was, particularly Bale and Carell, in learning the terminology and understanding the world they were depicting. That would continue to be a theme of the press coverage.

The movie got a huge feature in Vulture that covered the movie’s production, the cast’s work in figuring out what it was their characters were doing, how a movie like this is less than a sure bet in these uncertain theatrical times and lots more.

It’s a good campaign that, as I said before, has a nice, jazzy and consistent attitude and brand identity. The focus is certainly on the cast – how could it not be with names like Gosling, Pitt and others involved – but not at the expense of the story. The campaign never really stops selling the movie as having a point and a message of some sort, not just as a piece of entertaining fluff with a bunch of good-looking and popular movie stars. So it’s a fine line that’s being walked and I think it does so successfully.

But there’s a high probability the movie will fail to find an audience. Because it’s balancing being a star vehicle and prestige message movie it may wind up turning off the first round of actual civilian audience members who find it leans in one way or the other and isn’t thrilled with that direction.

One thought on “Movie Marketing Madness: The Big Short”