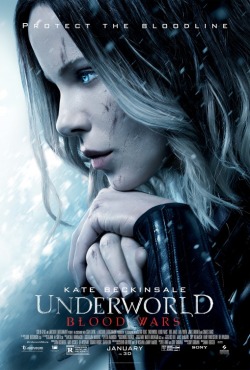 Kate Beckinsale is back as Selene the death dealer in Underworld: Blood Wars, the fifth installment in the Underworld franchise that began all the way back in 2003. It’s been four years since the last movie and while it’s hard to say that the general populace has been clamoring for more, the movies have generally at least made their money back (though the last one can’t hold to that claim) and so in the age of pulling out any and all brand names from the closet, this one was likely inevitable for a new movie.

This one puts Selene once again at the forefront of the eons-long struggle between Lycans and Vampires, each side wanting to eliminate the other. This time she’s out to put a final end to the fight while also dealing with the Vampire clan that betrayed her, I’m guessing in the last movie, which I haven’t seen. She holds the key to the war’s end and finds that achieving her quest may lead her to make the most difficult decision of all.

Beckinsale as Selene stands alone on the first poster, her black leather suit just barely visible beneath the white coat she’s wearing while standing in a snow-covered forest of bare white trees. So…white. She’s got both guns drawn and at the ready and look of fierce determination on her face, which is presumably in line with the movie’s story, which we’re told here is to “Protect the bloodline.” So Selene’s clearly on an important mission here.

A series of character posters came next showing Selene and the rest of the major characters. No names or other information are provided about them, just the actor’s names, on images that put them in front of some kind of gothic or snowy background. Again, the color palette here is all white and blue and grey.

The next poster just featured Beckinsale as Selene in her signature skin-tight black outfit and firing her pistols at something just below the camera, promising the audience a bit of sex appeal and plenty of violence.

Finally, the theatrical one-sheet shows Selene in a less violent and more contemplative position, looking out in the distance as rain or snow falls around her. “Protect the bloodline” copy at the top hints at the story a bit but that’s about it in terms of selling the story.

The first trailer starts off with Selene catching us up on the battle between the vampires and the Lycans, including how personal the war is to her since the enemy killed her parents. Things have been quiet but have started moving again, with the Lycans under new leadership. Selene, we find out, is no longer the favorite death dealer of the vampires but her skills are needed now, not to mention that her blood may hold the key to something vague and undefined.

Ohhh…kay. This certainly does sell an installment in the Underworld franchise, which means it’s confusing, more than a little nonsensical and is filled with mythology without any actual stakes. It features plenty of blue-tinged visuals and violence, hallmarks of the previous movies. It deals with the fact that it’s been several years since the last installment as well as it can with the opening narration but ultimately it fails to present a real reason why we should be interested in the return of these characters.

There’s more of a clear-cut (at least for this franchise) story on display in the second trailer. We get some talk about how Selene has been out of the fight for a while but she’s needed now because reasons. And there’s another coven that’s after both her and her daughter because they need her blood to make them more powerful than they are, something Selene’s not on board with. Then it’s just a lot of special effects and fighting.

Like I said, this one’s a bit better because it features a clearer explanation of the movie’s story, but the audience is still being asked to sign on for a muddled narrative filled with mythology that, I’m guessing, not everyone remembers from the first few films.

The main addition from the third trailer is that it makes it clearer Selene goes on some sort of journey that results in her getting new powers, powers we’ve seen in the other trailers but never had explained.

The movie’s official website opens with one of the trailers and when you’re done with that there are links to the Facebook, Twitter and Instagram profiles for the movie over in the upper right corner.

“Trailer” is the first section of content in the left-hand menu as well, followed by “Synopsis” which is where you can find a brief plot outline. “Cast and Crew” just has the names of the major players without any further information or links about them.

The “Gallery” has four stills, all of which feature Beckinsale in her signature outfit. Finally, “Partners” has links to the companies that signed on for promotional efforts.

TV spots like this one continued to not really worry about coherently selling a story instead focusing on various aspects of the flashy visuals, offering bits and pieces of the plot. Oddly, there’s no overt appeal to nostalgia or mention of this wrapping up the series’ story or anything like that, it’s just kind of out there as a crazy, over-the-top sequel.

The studio also ran a “3D interactive lens” ad on Snapchat, a 360-degree lens that added movie-themed branding to people’s pictures and videos. There wa also a Snap-to-unlock along with that.

There were also a handful of cross-promotional companies, including:

Congratulations to the studio exec who found two companies with thematically-appropriate names, but couldn’t they do anything more original with them?

It was announced that this would be one of the movies Sony brought to New York Comic-Con in advance of release to help promote it to the geek crowd assembled there. At that panel Beckinsale and others talked about returning to the franchise, their characters and more.

Beckinsale, naturally, continued to be the focal point of the press push with interviews like this that let the actress talk about her career to this point. 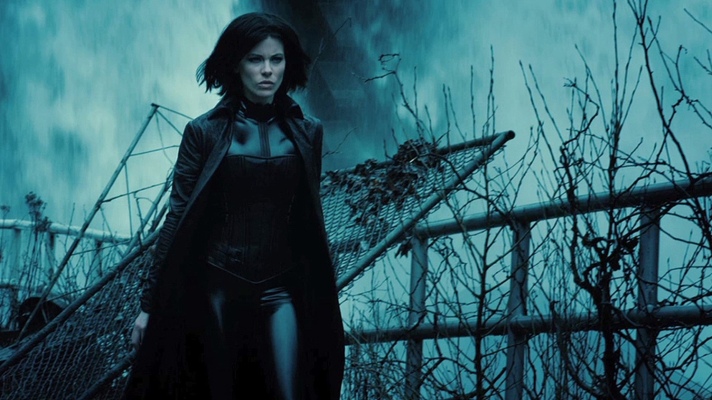 The campaign seems fine, though it can’t shake the fact that the movie seems to be the definition of non-essential. As I said at the outset, it’s not like this is a widely beloved franchise that has a long history of success. While it surely has a core devoted fanbase, if someone asked the average moviegoer when the last Underworld movie was they’d likely have a hard time nailing it down. It’s been around, but isn’t like some other recent sequels where we’re revisiting characters we haven’t seen in a while. This seems like someone just making sure the IP is kept in-house.

As I’ve said throughout, it’s remarkably unconcerned with selling the story, perhaps a realization that’s not the franchise’s strong suit. Just throw Kate Beckinsale in the suit and insert some random werewolf and vampire minions for her to shoot along with a couple mustache-twirling jerks out for their own agendas and hope the audience shows up to the extent it makes its money back.