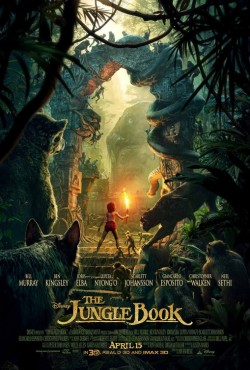 Good stories get told. Great stories get told time and time again, iterating each time. I’m not talking about the endless cycle of remakes, reboots, sidequels and so on that Hollywood counts on and churns out. I’m talking about the way some stories are so entertaining and even essential to the culture that they demand retelling. The best ones get something new with each version as the person behind it finds something new to emphasize, some new twist to put on it and new way to frame an old story in a way that makes it new and meaningful to a contemporary audience, whenever that is.

I don’t know if the latest version of The Jungle Book will accomplish that, if it will bring out some new and interesting aspect of the story, but that seems to be what it’s trying to do. Directed by Jon Favreau, the movie tells the familiar story of Mowgli (Neel Sethi), who’s been abandoned and taken in by the panther Bagheera (voiced by Ben Kingsley) after he’s threatened by the angry tiger Shere Khan (voiced by Idris Elba). After one threatening incident Mowgli runs away and encounters other animals, some who help and some who don’t, as he seeks to find out who he really is and discover his place in the world. The movie also features the voices of Bill Murray, Scarlett Johansson, Christopher Walken and more. 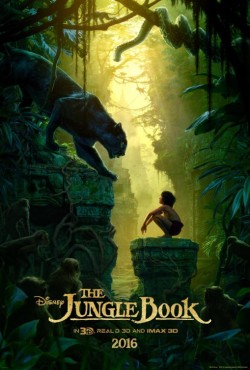 The first poster pretty much explained the core relationship that drives the story while also giving a brief look at the visuals of the movie. Mowgli is positioned on a pillar that’s part of some sort of abandoned, overgrown temple or other building, looking up at Bagheera. The rest of the temple is seen in the ray of sunlight in the middle of the poster while all around them other animals, mostly monkeys but with a huge snake at the top as well, are looking at the scene. It’s tranquil and peaceful and looks lovely.

Later on an interactive – sometimes called “living poster” – was released exclusively on Mashable’s Snapchat Discover channel. This was a good fit since the format of a movie poster plays well with the vertical layout most users prefer in their Snapchat stories. The poster itself just zooms in on a scene of the supporting animals watching as Mowgli walks up some sort of temple steps and is nice, but not particularly exciting. And there wasn’t a whole lot of motion on the poster as it reminded me of those Iron Man cartoons from the 1960s. That motion poster was later turned into a static poster.

A series of three posters debuted that focused on individual characters. The first showed off King Louie and Kaa, the second showed Shere Khan and the third with Kaa, Bagheera, Mowgli and Baloo. None of them named the characters on them but all showed off the lush jungle setting of the movie and fit in with the efforts of the campaign to date to show sell the movie as a visual experience. All three were eventually combined into a single image.

Another series of character posters was next, this time featuring each character in the setting in which we’ll find them. Prominently displayed is the name of the actor who’s giving that animal its voice, for obvious reasons.

The whole poster campaign is really meant to sell the lush visuals of the movie in addition to the all-star cast that voices the various animal characters. So there’s a very nice visual consistency across the whole campaign.

The first trailer – which was teased with a seven-second clip on Instagram – provided first looks at Mowgli and the rest of the characters, as well as the first listen we’ve had at the voices being given to them. It’s mostly structured around Sheer-Kan (voiced by Johansson) telling Mowgli that she knows what he really is and promising to keep him safe. Lots of animated animals fight, run and jump throughout the whole thing, which ends with Baloo whistling a recognizable portion of “The Bear Necessities” from the classic Disney movie.

It’s an effective trailer in the same way most first spots for big movies are in that it doesn’t go into the story almost at all but is instead focused simply on showing off the spectacle. This just needs to tell the audience that there’s a new movie coming out and on that front it achieves its goals.

The next trailer, which was teased during the Super Bowl, starts off with Mowgli being chased through the jungle, but we see it’s a friendly chase. Soon though we see he has to go on the run for real when Shere Khan wants to hunt him down since, a human is forbidden in the jungle. While running he meets all kinds of interesting characters, including Baloo who he forms a close friendship with.

It’s a good spot that definitely shows the spectacle primarily but also the humor of the movie. But the spectacle is paramount here since the studio really wants you to come see Mowgli running through jungles and leaping from one thing after another.

A special IMAX trailer starts off with an extended sequence between Mowgli and Kaa where she explains to him where he comes from and what his history is. After that it breaks into a more traditional trailer structure as we see Mowgli running and jumping through the story with little bits of dialogue from the other characters.

This one actually gives me much more faith in the movie than any of the other trailers. That’s due almost entirely to the extended scene at the opening, which tells me the movie could be pretty interesting if or when it slows down a bit.

The movie’s official website opens with a header that uses one of the key art triptychs featuring all the characters arrayed in a single image. There’s a big “Get Tickets” button right there as well.

As you scroll down there’s a TV spot you can watch just before an “About” section that offers a synopsis of the story with plenty of hyperbole on display about the technology that went into making the movie.

Then there are two downloads, one an “Educator’s Guide” that offers information on the kinds of animals that are seen in the movie, creative writing exercises and other things that teachers and parents can use to inform and educate their little ones who might want to dive deeper into the real world. There’s also an “Activity Packet” that has some of the same information but is more geared toward the younger crowd directly.

There’s a section with all kinds of features and other videos next, followed by a gallery of images you can view and download.

The movie ran its first TV spot during this year’s Super Bowl, though it teased it ahead of time. According to data from Networked Insights, the movie’s Super Bowl spot garnered the second-most brand mentions of the movies advertised during the game. But it came in third according to Cision. It also came in second among movies on a ranking of Facebook ad engagement. It was one of the only movies to have a game-spot-specific hashtag included to give viewers something specific to use while talking about the spot. A link to the full spot was posted on social networks, including Instagram, after it aired.

More TV spots like this one would setup the story of how the animals in the jungle are either trying to help or hunt Mowgli, with those who care for him trying to return him to the human world. It’s good but the focus here is still very much on the spectacle of the visuals.

Plenty of online ads were run as well, most of them using variations on the key art, sometimes in motion and sometimes not, along with Twitter and Facebook ads that used one of the trailers or other media.

Outside of the release of official marketing materials there were occasional releases of stills that offered first looks at some of the characters. Soon after that Favreau talked about how he went about bringing modern movie technology to bear to tell the classic story and how the movie fit in with the other movies he’s made over the years.

Technology and nostalgia continued to be a main component of the press campaign. At the movie’s press screening Favreau talked about what finally convinced him to get involved in the project despite his initial reluctance and how part of that was the idea of doing something technically innovative.

A nice publicity cycle was had when images were released of the cast posing alongside their characters, which were obviously Photoshopped into the pictures. Then, just before the movie opened, it was announced Disney was already working with Favreau on a sequel.

Favreau, Kingsley, Sethi, Murray and much of the rest of the cast made the talk show rounds, appearing on the morning and late-night shows to sing songs, talk about the movie and generally keep the conversation going.

As I mentioned above about the posters, there’s a nice visual consistency to the whole campaign that really brings it all together. The emphasis throughout the entirety of the marketing is on the visuals, whether that’s the jungle backgrounds and settings that Mowgli wanders through on his journeys or on the character designs themselves. That’s supported by the consistent calls-to-action to see the movie in IMAX and/or 3D, so it’s very much being sold as a big spectacle that needs to be seen on as big a screen as you can manage.

Unfortunately that comes at the expense of a bit of the story. While we certainly get a look at the premise, there’s not a whole lot about *why* the characters are acting the way they are. That is likely still a part of the movie itself but it’s not here in the campaign, so if you’re looking for motivation or anything along those lines you’ll be left out here. The campaign instead is all about selling a big movie that has a seemingly never-ending series of action sequences, close calls, harrowing situations and other moments of tension. There are even only a few hints as to any sort of humor, mostly coming from Baloo, in the movie. That seems odd and the lack of family-friendliness is made up for in other areas. But based solely on the campaign this looks like a movie that might be too intense for the younger members of the audience.