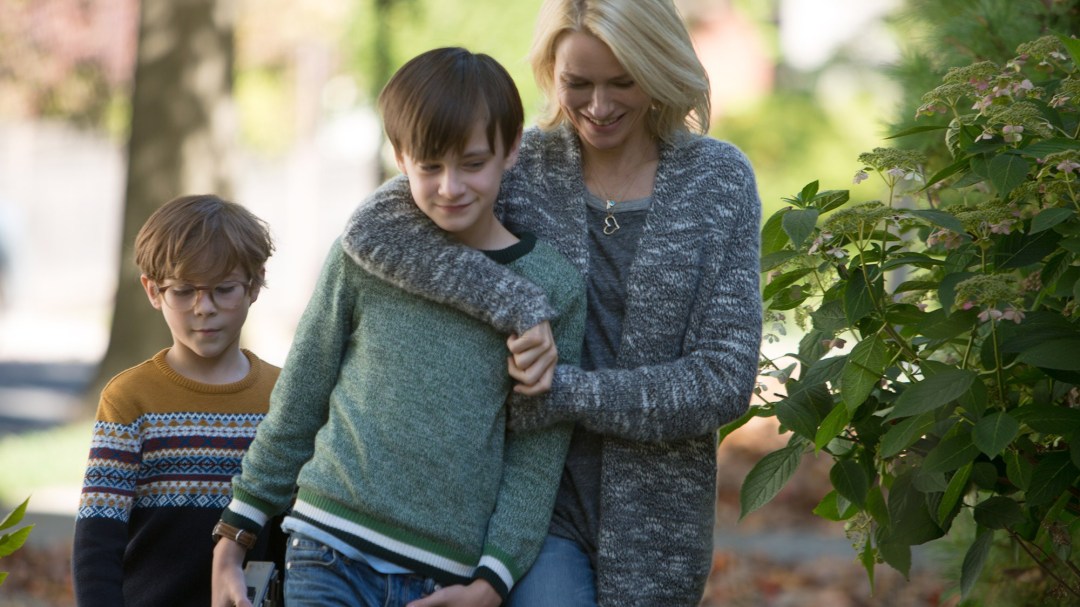 Director Colin Trevorrow made some minor waves with his debut movie Safety Not Guaranteed, at least enough that he was next offered Jurassic World, the relaunch of the popular dinosaur-based franchise. Now he’s back into smaller territory with this week’s The Book of Henry, starring Naomi Watts, Jaeden Lieberher and Jacob Tremblay.

Watts plays Susan Carpenter, mother to Henry (Leiberher) and Peter (Tremblay). Henry, in particular, is the head of the household despite his young age. One day she discovers Henry thinks the young girl who moved in next door with her stepfather is in danger and sets out to help him execute an elaborate plan to rescue her.

The first poster promises a story of precocious children. We see two boys, one wearing an old-school football helmet and holding a plunger, starting at a chalkboard that’s filled with blueprints and diagrams and explanations. It’s like they’re making plans for some sort of big exploration or adventure. “Never leave things undone,” we’re told by the copy.

The second uses that same copy but the painted look of the poster gives it the look and feel of the one-sheets designed by Drew Struzan in the 80s for Steven Spielberg and others. There’s a boy wearing goggles, one riding a bike away from a dilapidated house of some sort, a young girl looking at the camera, another dancing in the moonlight and someone, likely the story’s antagonist, furrowing his brow. The same plans and designs are seen in the corner. The whole thing conveys the sense of childhood wonder and adventure that those 1980s posters did, promising an emotional but thrilling ride.

A third took things back in the other direction. Again, the same copy point is used but this time it’s via a note that’s attached to the front cover of a journal. Tucked into the strap of that journal is also a photo of a family, with a picture of a girl taped to it, which may hint at the character’s relationships in the story. Another used the same kid in the helmet focal point and the “Never leave things undone” copy. It’s a painted poster – you can see that clearly – and gorgeous but doesn’t add much new to the marketing.

We meet Henry in the trailer as he’s the smartest kid in his class and the one that manages the family finances and other responsibilities. Henry meets Christina, a new kid who moves in with her stepdad to the house next door. Henry and his family become concerned something is wrong in that house and Henry begins documenting everything that happens. His mom Susan then is responsible for executing his plan to try and fix it but finds herself getting deeper into something she doesn’t really understand.

It’s a tight, wonderful trailer that starts off as a heartwarming family drama but ends up as a tense thriller about taking justice into your own hands. Tremblay doesn’t get a whole lot of screen time here as Lieberher and Watts dominate, but that makes sense considering the story that’s on display. It looks like the best kind of movie Amblin would have produced 30 years ago but with a modern spin that makes it relevant now.

Since this is a Focus Features site, there’s a kind of loose organization to the site. So scroll down and you’ll see the trailer, clips, photos, character bios and lots of other information and content. It’s all very stylishly presented, but it’s not as organized and segmented as you’ll find on other sites.

If there was much advertising done I can’t find it. That’s a little surprising since while this isn’t a huge tentpole there are a lot of recognizable names attached. “From the director of Jurassic World” alone would have made a great hook. The only paid media that’s crossed my radar has been on social media, where the trailer has been used to drive ticket sales.

Aside from the discussion of the movie happening in the first place, something that caused quite a few stories considering Trevorrow was consciously moving away from big-scale action movies, the first bit of publicity and press came in the form of a first look photo in Empire.

Unfortunately, things then got pushed back a bit as the movie was shifted almost a year from its original September 2016 release date. As release neared, though, things ramped up starting with an appearance in EW’s summer movie preview that featured a first-look photo, comments from Trevorrow about how it’s actually Susan’s story we’re following and more. 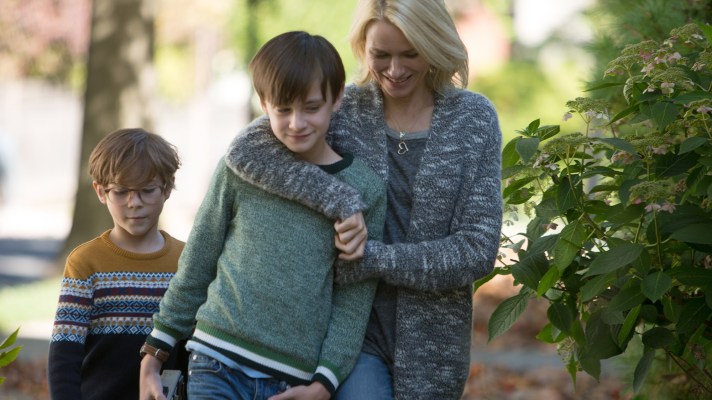 The movie was announced as the opening night film at the L.A. Film Festival, giving it a nice platform.

Trevorrow and the rest of the cast also made the media rounds, including morning and late-night talk shows to talk about the movie and all that. If you check out the social feeds you’ll see promos for appearances and photos from the cast, primarily the kids, as they were traveling around for interviews and other appearances.

I name-dropped Amblin earlier and that’s kind of a cheap reference point, but it’s also pretty accurate. Movies like this, about the wonder and mystery of childhood that focuses on kids that are smart, self-motivated and trying to find their way in the adult world, don’t get made much anymore. But you watch the trailer here and you get flashbacks (at least if you’re my age) to movies like E.T., Flight of the Navigator, Stand By Me and more. Too often kids are either infantilized or just made super-annoying to show how hip they are, but the campaign here presents them as just being…kids, even if one of them is wise and mature beyond his years.

There aren’t any issues that come up in my mind regarding the tone and feel of the campaign. It’s great and while it may not pull people away from Wonder Woman or Cars 3, it works to sell the movie effectively. My only issue here is that there doesn’t seem to be enough of it, especially in the last couple weeks. I would have loved to have seen another trailer drop in the last few weeks or another poster released. It’s been two months or so since the official trailer hit and while there have been a few press pops here and there, nothing substantial has been released in the last month. That means there haven’t been the opportunities to keep the movie at the top of people’s awareness in a period when they’re making their moviegoing decisions and could hurt box-office prospects more than anything else about the campaign’s structure and feel.

One thought on “Movie Marketing Madness: The Book of Henry”