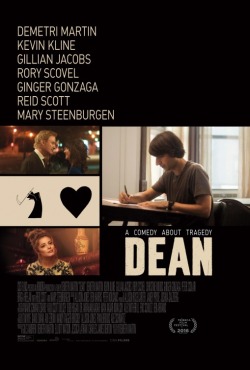 Demetri Martin plays the title character in Dean, which he also wrote and directed. Dean is a young man who works as an illustrator in New York but is feeling stuck and overcome by grief after the recent death of his mother and his strained relationship with his father (Kevin Kline). Deciding his life needs a shakeup, he goes out to Los Angeles for a little while to try and get a fresh perspective on things.

What was meant to be a short vacation gets complicated when he begins to date and develop feelings for Nicky (Gillian Jacobs). Meanwhile his dad is in the process of selling their old house now that it’s just him and beginning what might be his first relationship since his wife’s death with the realtor selling the house.

The poster is pretty simple. The cast list dominates the top third of the design and the credit block is the primary feature of the bottom third. In the middle are photos of the major characters, Kline with Steenburgen, Martin sketching at his table and Jacobs sitting in a restaurant. Also featured in one block are the sketches that Martin’s character creates and which were shown in the trailer.

When the trailer opens we meet Dean as he’s listening to what seems to be the last voice message his dead mother left him. He and his father are both grieving their loss, each in their own way, which for Dean means taking a trip to L.A. for some self-discovery. His dad is selling their old house and potentially meeting a woman while doing so. Father and son keep leaning on each other for support as they try to come to terms with their new reality.

It’s a cute and funny trailer, showing off the story and characters well. I know this is Martin’s movie but can we talk for a minute about what a national treasure Kline is? He breezes through this with a charm that looks infectious and his part of the storyline looks just as interesting and intriguing as Martin’s. Still, the whole thing looks pretty attractive.

Not much on the web for the movie, just a page on the CBS Films website. That page has a synopsis, the poster, the trailer, a cast and crew list, a link to the movie’s Facebook page and a collection of curated Tweets about the movie from various news outlets.

Nothing I’m aware of here.

The first real buzz for the movie came when it debuted at the Tribeca Film Festival, where it won the best narrative feature award, something notable for first-time director Martin. That eventually lead to CBS Films picking it up. 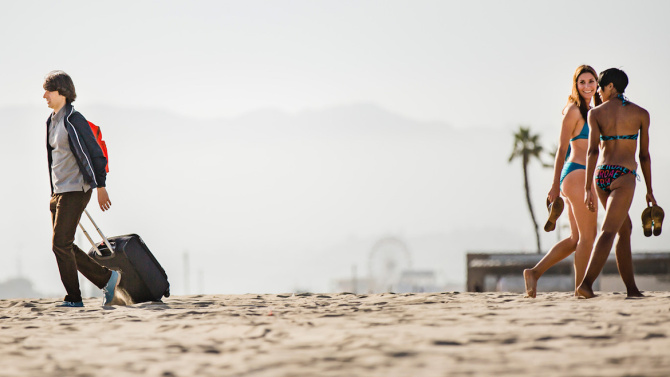 Closer to release Martin made a couple appearances on the talk show circuit. And he talked at the movie’s premiere about how lucky he felt to have made the movie and found a distributor along with how he got veteran actors like Kline and Mary Steenburgen to join the film.

It’s obviously not the biggest campaign of the week and yes, it’s yet another instance of white people with otherwise comfortable lives who are so emotionally stunted they just can’t deal with being an adult. But it’s a charming campaign that’s powered primarily by Martin’s script and performance. There’s nothing that will leave a huge impression here on the audience as it might fade into the background noise of similar movies, but a few key components including Kline’s performance may set it apart and draw in those who have followed the movie’s trek toward release.