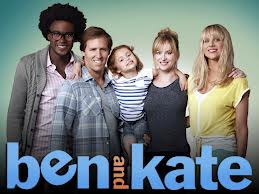 I know we’re all supposed to be in full on “mourning the end of 30 Rock” mode right now – and I’m right there with everyone else on that as well – but I’m also bummed that Fox killed off Ben & Kate.

No, it wasn’t great TV, but it was solidly enjoyable week to week and star Nat Faxon’s kind of energy was pretty unique to the television landscape, bringing a weird improv-based vibe that fit the character perfectly. And I enjoyed how it was about a group of friends who, for a change, weren’t mean to each other or always waiting to pounce on one another but who instead backed each other up, genuinely like each other and otherwise came together as a makeshift family.

UPDATE: Marc Hirsch at NPR liked the show for many of the same reasons I did:

Ben & Kate took a different tack. The siblings have occasionally butted heads, but more important than them loving one another is the fact that they like one another. And they like their friends Tommy and B.J. And Tommy and B.J. like them back. So do Tommy’s parents, whose mild exasperation at being occasionally drafted as last-minute babysitters for six-year-old Maddie can’t disguise their affection for everyone involved. Everyone is happy to have everyone else in their lives. They’re all one team, them against the world.

That’s not all that common on television, and certainly not in television comedy. More typical are shows like Community, where the characters have grudgingly learned to love another while constantly struggling with the fact that they quite often don’t like one another very much. Modern Family and Cougar Town have similar (though less extreme) dynamics, while a show like Happy Endings shows its best-pals sextet occasionally treating each other badly enough that they frankly seem like a bit of a frenemy time bomb.