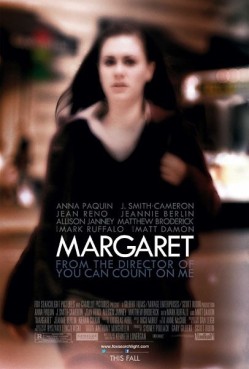 How much responsibility do we shoulder for the actions of others? A strict moral code would say that whenever we see someone do something wrong it’s our job to first confront them, ask them to confess their actions and deal with the consequences. But what if, in doing so, we would cause another, equally bad outcome? Does the first point take precedence or should we remain mum under the belief that by being more bold we’re only serving to cause more problems than we solve?

That’s the dilemma faced by the title character in Margaret. Played by Anna Paquin, Margaret one day witnesses a bus driver (Mark Ruffalo) hit a woman and her child in a crosswalk while he’s not paying attention to what’s around him. But when she’s questioned about the accident she says the driver was not at fault. When she considers telling the authorities the truth he pressures her to remain silent because the truth could cost him his job and his family their only means of support. But the burden of keeping the secret starts to impact Margaret’s relationships with the other people in her life.

The movie is finally being released after five or six years on the shelf. Directed by Kenneth Lonergan, who made a big splash with 2002’s You Can Count On Me, the film has floundered in search of a release based largely, according to the press, on Lonergan’s inability and unwillingness to edit the film down to less than three hours. Now, having finally reached a reasonable (as defined by studios) feature length, the film is hitting screens.

The movie’s one and only poster simply shows a blurry image of Paquin hustling down a sidewalk, kind of a panicked look in her eye. There’s a bus in the background but I’m honestly not sure if that’s on purpose to tie into the plot of just a happenstance of design but if you’re hip to the story then that’s a nice touch.

Other than that it’s just the cast list – which is formidable – and the promise that the film comes from the director of You Can Count On Me, which is going to carry a lot of weight with people who still fondly remember that film but won’t have much meaning or appeal for those who don’t.

The one trailer – released just a week or two before the movie hit theaters – tells the story of the film rather well. We meet Margaret as an awkward teen who winds up witnessing an accident where a bus hits a mom and her baby. That naturally messes her up but she’s hesitant to tell anyone the truth because doing so will mean the driver of the bus gets fired. Her grief and problems impact the people around her and even lead her to have some sort of fling with a teacher of hers.

It’s a good trailer that certainly shows what the movie is about, even if what it’s about might be a little uncomfortable in parts. It’s kind of like watching a news reel at times because the actors are all five or six years younger than they are now (more on this below) but that’s not enough to pull you out of the story and, while you can see what the broad strokes are going to be, fans of Lonergan’s previous work will likely have faith that there are lots of grace notes that make the film unique.

While the official website for the film would usually be notable if for no other reason than it came from Fox Searchlight this one shows the rushed nature of the release and the manner in which the studio sees the movie. So there are a couple stories and a Synopsis and a Trailer along with some stills but that’s about it.

The movie has been bouncing around unreleased for almost five years, having been completed in 2006. But then a series of disagreements between Lonergan and the studio over the film’s final running time, with the director insisting on a three-hour cut and the studio insisting on a two-hour version. Many directors and editors tried to step in and resolve the dispute, with Martin Scorcese finally coming in to work things out, something that led to a release eventually being scheduled.

There’s some good stuff here but, as I’ve pointed out a couple times, it’s just not quite as full-throated as you would expect it to be, even from the point of view of a movie that’s presumed to have limited appeal outside fans of certain arthouse films. The trailer is pretty good as is the poster but then the official site is barebones even by independent film standards. And it’s disappointing to see that the publicity efforts didn’t seem to try to pick up the slack a bit. But what is there is pretty good and should appeal to a certain audience, especially those who have been eagerly anticipating another film from Lonergan.