The focus of the campaign for Elvis & Nixon was on the actual meeting of the two public figures, a real event that came about as the result of Elvis’s desire to become an undercover federal anti-drug agent. Much of the running time of the trailer and almost the entire rest of the marketing was focused on the two of them actually getting into the same room, something that was awkward and not well thought out by really anyone involved. 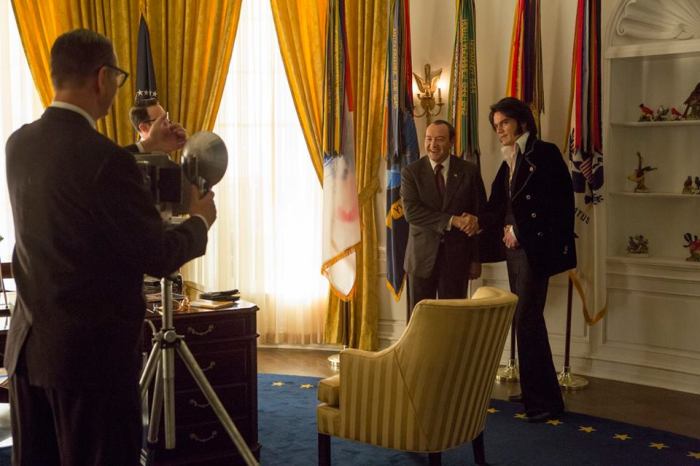 In reality the movie has much more going on that wasn’t covered in the marketing at all. What was surprising was that the core of the story is focused not on Elvis. At least not directly. Instead we see Elvis and his actions largely through the eyes of his longtime friend Jerry Schilling, played by Alex Pettyfer. The Elvis side of the movie is told from his perspective and that story provides the most imminent stakes in the story since he’s trying to get back to Los Angeles to propose to his girlfriend.

The relationship between Elvis and Jerry informs almost everything in the story. Jerry is Elvis’ body man and friend, someone who looks out for The King, protecting him from others and sometimes himself. He’s been out of the loop for a while but Elvis calls him when he gets the idea to go meet the President and Jerry spends much of the story insisting this is a one-time thing, that he’s not back in the entourage for keeps. It is, to a large extent, his story that we’re following since he’s the one who makes everything that leads up to the Oval Office meeting happen.

That was completely missing from the marketing, though it’s easy to understand why. The audience was being sold the “real” story behind an event that largely defied belief. A focus on a character who wasn’t either Elvis or Nixon wouldn’t have had the same appeal. But it’s Jerry’s story, as well as the actions of the White House aides played by Colin Hanks and Evan Peters, that drives everything forward and it’s there where the most interesting aspects of the story are actually found.