Movies On the Brain: The Man From U.N.C.L.E

Last year Warner Bros. Pictures tried to launch a new spy franchise with the release of The Man From U.N.C.L.E. The movie, directed by Guy Ritchie and starring Henry Cavill, Alicia Vikander and Armie Hammer, has the three of them trotting around Italy trying to keep a nuclear device out of the hands of a mysterious criminal organization. Cavill plays an American thief turned spy, Hammer a top-notch KGB agent with anger management issues and Vikander as the woman who’s caught up in things. This attempted kickoff didn’t exactly go as planned, with the movie underperforming at the box-office and not winning over critics. But it’s the perfect movie to turn on and let your mind wander during…

0:01 – What’s the best opening credits sequence you can think of? The first one I remember really paying attention to as I was developing my film tastes was the one for City Slickers, which is still the yardstick I measure others against.

0:02 – We watch a lot of “Psych” around here and I always marvel at how much of the camera takes are simply the camera zooming in either on Sean’s eyes as he squints at something or the object he’s squinting at. It’s a lot.

0:03 – Alicia Vikander just told Henry Cavill’s character his accent is pretty good for an American and I’m thinking it’s notable no one told him that in Man of Steel.

0:04 – So the plot here is that they’re looking for Gaby’s father? Now I can’t get Top Secret out of my head.

0:07 – The screenplay has trucked in so many cliches of the spy genre in the first five minutes I have to wonder if there was a shortage in the industry for the rest of the year. Whatever quota there was on usage this movie exceeded it and salted the earth before new ones could be grown.

0:13 – Have you ever actually done the math on the route Ferris Bueller takes to get home after he leaves Sloane’s house at the end? You know, where he’s running through houses and backyards and flirting with sunbathing girls? I know it’s not great to look too closely at comedy, but that has to make no sense, right? Especially the part where he runs down the middle of the street, completely undoing whatever gains he’s accomplished? I could go on, but I won’t.

0:15 – As a kid growing up in the 1980s, the HBO opening was an important part of any movie-watching experience. Whether or not it was used and which version, the short or full one could impact my enjoyment of the following movie and ignite a debate. It’s a thing of beauty.

0:17 – The opening establishing sequence is finally over and even with the amount of disbelief suspension I just had to do it was still better than those from some of the recent Bond movies.

0:24 – Sure, wait until after the predictable moment when someone would be upset to explain to them what the plan actually is. That always works out well.

0:26 – In comic books franchises that aren’t connected at all are always crossing over, even if they come from separate companies. Just recently we’ve had Star Trek/Green Lantern and Batman/Teenage Mutant Ninja Turtles. But movies are still lacking a National Treasure/Da Vinci Code crossover so what’s even the point?

0:28 – “You’ve not experienced Shakespeare until you’ve read it in the original Klingon” is still one of my favorite lines of all times, I don’t care if you @ me.

0:29 – “Don’t forget to take it like a pussy” and I’m thinking yeah, the screenwriter was really enjoying being able to say “Hey, it was the 60s” and get away with that line. Wow.

0:31 – Cavill’s Solo keeps popping up here to provide exposition and reactions like he’s Robert Benchley in Road to Utopia.

0:34 – This is a big hotel suite with lots of rooms and this shot of the living area into the bedroom is making me wonder if Steve Martin had to run back quickly to get into his wheelchair.

0:38 – Venkman searching Dana’s apartment with the fake instruments and playing the piano keys is the level of comedy I aspire to. No one knows what’s going on, it’s not clear if he’s a fraud or not but it’s funny as hell.

0:40 – Truth: I think Iron Man 2 ruined car racing scenes in movies for me. I haven’t been the same since…

0:42 – It takes a much more gifted physical comedian than Henry Cavill to pull off the “contrived clumsiness” schtick. Not that he’s bad, but there have been plenty better.

0:43 – This character just said she’s been on a diet of champagne and caviar for three weeks and I’m all please, Lucille Bluth hasn’t had anything but vodka and olives for four decades. Get on her level and we’ll talk.

0:45 – All the talk about Solo being a thief is just making me think of To Catch a Thief and tbh I’d rather be watching that.

0:48 – One of the bad guys here is legit Sasha Baron Cohen’s Jean Gerard from Talladega Nights and tbh I’d rather be watching that.

0:49 – Lots of sexual flirtation going on involving Solo talking about “filling in” a woman’s gaps is making me think of History of the World Part I and tbh I’d rather be watching that.

0:50 – Darkrooms are always a good setting for some character to pull out some sort of specialized, heretofore unrevealed piece of equipment, largely because they’re something the average member of the audience has no experience with. There are countless examples, but what’s coming mind right now are all the spectral analyzers in the scene from Ghostbusters II. Also this exchange: “Pizza? Deep dish? Chicago.”

0:52 – Gadget envy and millions of spies suffer from it. It’s nothing to be ashamed of, but you have to admit there’s a problem before you can seek help.

0:53 – The visual aesthetic of Ang Lee’s Hulk works, guys. It does. While we debate whether or not the super hero genre is evolving or not, Lee did something really innovative 13 years ago and it deserves a little respect. He owned it.

0:54 – The Phantom Menace ruined any future scenes of one character knocking another out for me. You can’t do it anymore. It’s just one example from the Prequels of something Lucas thought of and inserted in random spot with no internal logic applied. No one can do it anymore without my mind automatically adding “You overdid it,” a line that implies a lot but explains very little. I’m getting mad just thinking about it so let’s move on…

0:57 – Everytime Hammer says “cowboy” with a Russian accent I’m flashing back to Hunt For Red October.

1:00 – While this movie certainly has its problems, this scene of Cavill calming have a snack while sitting in a truck and watching Hammer engage in a never-ending boat chase is legit funny, especially with the soundtrack that’s playing. 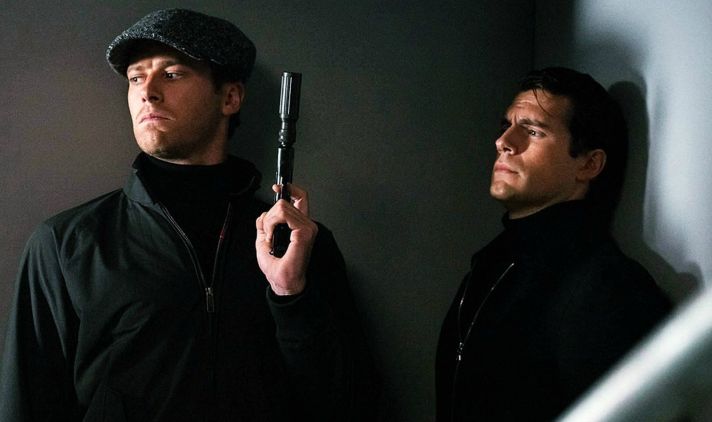 1:04 – The Life Aquatic’s soundtrack of David Bowie covers in French is a goddamn gem.

1:08 – So many double entendres in this movie it risks collapsing under their weight. Every other line is an insinuation of sex. The screenwriters may have written this while they were in seventh grade.

1:09 – If you look closely, you can see George Clooney’s estate from here.

1:11 – Release the hounds! I haven’t watched “The Simpsons” in a while, is this still a running gag or is it a line anyone under 20 won’t get or only recognizes because of it continued usage in the broader culture?

1:15 – The double entendres are nothing compared, I’m sure, to the amount of slash fiction that’s been written about Cavill’s and Hammer’s characters. I mean come on, guys…

1:16 – There’s too strong an impulse to excuse, rationalize or at least explain, evil. That’s been part of the recent crop of movies featuring villains as misunderstood characters who just want to be loved. Not only do you not need to do that in fiction, it’s also largely unnecessary in real life. Some people are just bad and it’s not going to make us any safer or even feel better if we know they had a bad childhood. Let it go.

1:22 – “Looks like Antoine got a little hot under the collar” is a great line that shouldn’t work as well as it would if anyone but Jack Nicholson delivered it while wearing clown makeup.

1:27 – All this work that’s being done on the bombs reminds of me of the first season of “Revolution” for no reason other than that I just recently watched it.

1:30 – How many times can you think of where there’s been so much setup and then the action sequence, usually the entire point of a movie, is skipped over like this? We’re getting the Cliffs Notes version of an invasion and firefight here, where most movies would revel in it and make it the central focus. Notably, though, this sequence wasn’t teased overtly in the trailers.

1:34 – Just to make sure the audience got it, he did it again. Is this movie even trying?

1:36 – “Captain Hammer…threw a car at me” I’m thinking as Hammer throws a motorcycle at a bad guy.

1:40 – Cavill is showing more emotion and range in this one scene with a few eyebrow raises and vocal inflections than he did in two Superman movies. (glares at Zack Snyder)

The movie’s not great. Let’s admit that right off the bat. But darnit if I didn’t have a good time with it. There are so many holes in the plot and so many examples of lazy screenwriting it’s almost a master class in those subjects, but for the most part things keep zipping along quickly enough that it doesn’t really matter. The problems seem to exist mostly with the cast. Putting Hammer in the role of a stoic Russian covers up his natural charm. And asking the blocky Cavill to be the smooth one is a…miscalculation. Still, it’s fun and if you don’t expect too much (knowing Ritchie’s previous work helps a lot with this) you might be entertained.