That’s more or less the logic and argument being put forth by the president over the last few days in response to one update that seemed to acknowledge he intentionally engaged in obstruction of justice.

Mistakes are natural in social media marketing. They happen. The specifics of how blame is apportioned may vary but it usually falls into one of two big buckets, both of which don’t hold much water when put under any sort of examination.

This one is a favorite of companies that use agencies for their social media work. If a mistake happens they will quickly seize control and let everyone know that it wasn’t them, it was their agency, someone supposedly not affiliated with the brand so don’t associate those negative feelings with us, thank you very much.

The problem here is that the company is the one who hired the consultant or agency and gave them the mandate and ability to speak on behalf of the brand. That’s an extraordinary and humbling responsibility, one I always took seriously over my career, even if I didn’t always take the execution seriously. The company who has done the contracting is still on the hook for what’s published under its name and answerable for it. If you’re uncomfortable with that situation, educate yourself to the point where you can handle the program internally. Otherwise get comfortable with a workflow that takes the final trigger out of your hands.

#2: It Was a Low-Level Staffer

While we can have a conversation about the relative inexperience that seems to be in demand by companies looking for “social media experts,” the reality is that social hasn’t been delegated to interns for a good long while, if it ever really was. Anyone who ever did this was making a bad decision. Interns may have been part of the team, but leaving them unsupervised means final accountability lies with the manager who wasn’t keeping an eye on what they were doing.

Again, this excuse doesn’t actually make anything better. It’s still someone working for you and presumably operating within the prescribed workflow. If that’s not the case, you have bigger problems than entrusting your corporate reputation to someone without the necessary skills or perspectives.

If at any point in the last 10 years you’ve found yourself on the cusp of making either of the above excuses – or any of the variations on them – you have bigger problems. It’s not that an intern has a level of access they shouldn’t. And it’s not that your contractor or agency made a regrettable misstep. It’s that you have a workflow problem. There are ways to fix that:

In short, mistakes happening aren’t opportunities to assign blame and cover your own butt. Take responsibility for what happened and engage in productive activities to limit the chances it, or something similar, will happen in the future.

You may never be able to eliminate all mistakes – we’re human beings on the other end of the screen and sometimes we’ve typed “Batman” so many times that day we don’t catch that this time we spelled it “Bartman” – but you can decrease the rate at which they occur.

That’s as good as you’re going to get and, in the end, it looks much more professional than ruining someone’s career because of poor wording.

There’s a scene from the 1994 Tom Clancy novel adaptation Clear and Present Danger I think about a lot. The president has just learned a longtime friend of his was just killed by members of a drug cartel he appears to have been involved with and is receiving advice from staff on how to handle the crisis. Most everyone in the room is telling him to distance himself from the guy, downplaying the friendship to a casual acquaintance. Jack Ryan (Harrison Ford) grumbles and says no, the president needs to make it clear the two were close personal friends. The facts will come out eventually, so own up to it now and give the press nowhere to go.

That scene came to mind once again over the weekend when I saw the following Tweet from McDonald’s making the rounds.

Obviously, someone in advance of the long weekend had accidentally moved this update from “drafts” to “scheduled.” It was a placeholder that should have been removed long ago, meant to show that there was something planned for the day but that what exactly it would be hadn’t been determined yet.

There are lessons here about editorial calendar management and workflows and all that, sure. Most times the Tweet would have been deleted and an intern blamed for letting something like that slip out. Instead, not only is the Tweet still alive, but the company seems to have a sense of humor about it, as shown in the reply it sent to its own update. 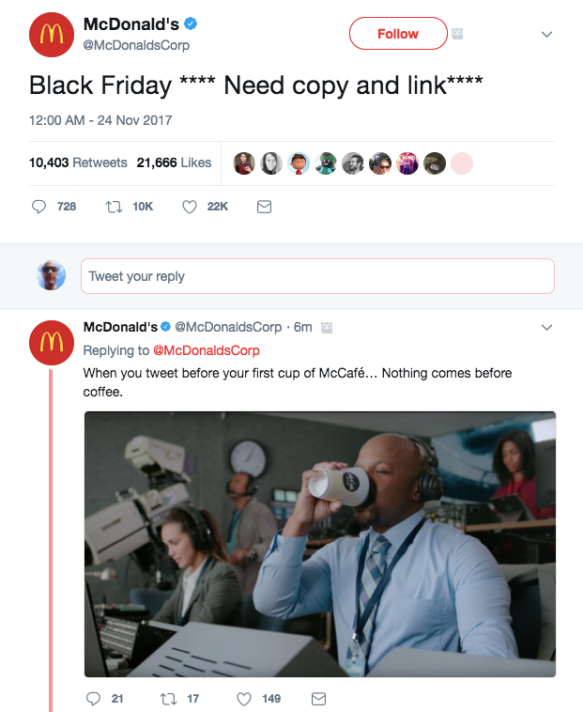 Years ago I found myself in a similar situation with a client I was managing at the time. I wrote a Tweet about a product announcement that included the name of someone involved, someone I thought I was familiar with. So I referred to that person as “he.” The update went live and the replies started coming in that no, it was a woman. This was early on in the client relationship and so a brief conversation with the marketing team ensued where I rightfully had my hand slapped a bit.

They wanted me to take the Tweet down but I argued doing so was disingenuous. Yes, it was a mistake, but it wasn’t fatal. Instead, I convinced them to let me post a reply basically admitting the mistake and blaming it on some fictional construct that resulted in crossed wires. After I did so everyone in the audience seemed to laugh it off and we all went on with our days. Importantly, it set a precedent for the future, allowing us to quickly make light of the few times we made a non-fatal error in our program.

I prided myself on the fact that for a program that published 1,200 updates a month across almost two dozen profiles, our error rate was roughly .0025, a quarter of one percent. That included everyday typos along with misspellings of branded elements. That’s a testament to the editorial workflows that were in place as well as the talent on the team I managed.

When we did commit an unforced error that was a bit more serious, we tried to lean into it and admit the mistake in a good-natured way that placated fans and proved that having a sense of humor and admitting you’re human is a good approach. Too many marketing types believe every misstep needs to be erased from existence as soon as possible and its very existence denied, lest someone begin to believe the brand is less than perfect. On social media, though, acknowledging the error and laughing along with the audience is often the better approach. Doing so can have more benefit for brand reputation – you’ve shown not only are you fallible but that you’re not going to throw some mid-level program manager under the bus – than whatever negative impact you’re afraid such errors might result in. You’ve gained more than you worried you might lose.

My one hope here is that the person who was responsible for this going live didn’t feel any behind-the-scenes repercussions. These are opportunities for learning and evolving the program, building in more safeguards or at least evaluating current processes, not for punishing someone who accidentally clicked the wrong button as they were trying to get ready for the long weekend.

Brian Steinberg hits a home run in his first column for Variety (which desperately needs to fix its RSS feed) as he talks about how the media, whose business models depend on viewers’ full attention, have been simultaneously making it clear that the viewers’ full attention is not necessarily. They’ve been doing this by including ads in the programming (and programming in their ads sometimes) and through encouraging people to have social media conversations at the same time they’re supposed to be watching a show.

There’s so much in this story about how LinkedIn has added to its original or curated editorial mix that can be learned from if you run or participate in some sort of publishing program it’s a bit overwhelming. Just a treasure trove of moments that had me bouncing over to Evernote to jot down an idea, question or action item.

Likewise this “thinking out loud” post from Paul Smalera about how content editors can’t be blind to the analytics, technical requirements and other factors that can influence what content is published, how it appears and more.

Fan activation is something I’ve been thinking a lot about recently and the WSJ has a story that looks at how a couple of fashion brands have begun sourcing photos from everyday folks – albeit still often young and attractive ones – and incorporating them into their online marketing. This is actually exemplified in a separate but similar story about how one particular company tapped popular Tumblr publishers to model their clothes, photos which were then aggregated on the company’s own Tumblr profile.

If ever there was a story that exemplified how some companies see social networks simply as content engines it’s this one about National CineMedia working in various ways to leverage Twitter and Foursquare information. Not only will NCM produce original content based on Twitter trends but it will ultimately sell ads against that data while also selling local business-oriented ads based on Foursquare check-in data. And most all of this is also being utilized across web and mobile platforms operated not just by NCM but also theater partner Regal Entertainment. Super interesting example of four or five different convergence points happening at the same time across platforms.