Last December I got a message from the staffing agency I’d been working with for a while that an opportunity was available. A financial services and consulting firm needed someone to manage their social media marketing efforts while the woman who usually handled that went out on maternity leave.

The story of the interview is pretty epic for the extent to which it was a complete disaster, with almost nothing going as planned. I’ll tell that another time, but despite all the complications and problems I got the gig. 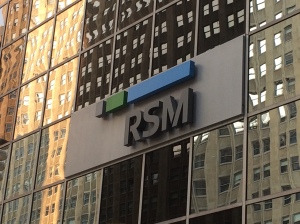 So began my time with RSM US LLP.

The original five month contract was meant to cover the length of the maternity leave, which made it a pleasant surprise when it was extended another three months, covering June through August.

One of the questions I was asked on that hot mess of an interview day was what experience I had with regulated industries. RSM operated in a world of SEC-backed and other rules, after all, so they wanted to make sure whatever shoot-from-the-hip instincts I might have would be tempered by the reality that every word published by the company could come under intense scrutiny and open the company – and its clients – up for investigation in some manner.

I was clear with them that yes, I had some experience with such restrictions from my work with clients in the alcohol and healthcare industries, but nothing specifically regarding finance or securities.

Now I have that experience. Which is good for me. And I think I helped them out as well, offering my insights and thoughts to not only keep the lights on while the current manager was out but to hopefully bring a new perspective to the program and its operations.

The eight months at RSM offered me the chance to do a lot of cool things, from managing inbound requests and funneling them through to eventual publishing to creating new program documentation that will help everyone continue on in my absence.

Gaining that experience was totally worth the time I spent at the company. It’s a new notch in my belt, something I can take with me down the road. In that way it’s similar to still being at an agency where you can shuffle around a bunch clients in a variety of fields. When new opportunities come up in the financial services sector I’ll be more able to compete for that work.

More than that, I learned a lot about the world of economics in general. Immediately after starting there I subscribed to the RSS feeds for a number of business and economics publications and started doing my own reading. That opened up a lot of new ideas for the job itself and also simply added to my overall knowledge and understanding of the world.

That this coincided with a…interesting…period in US economic history was a positive side effect. I was able to watch more closely than I had before as topics around employment, productivity, worker wages and others were discussed and theorized about, gaining insights into what’s happening and how it impacts both myself and everyone else. Especially helpful was reading and listening to Joe Brusuelas, the company’s chief economist and a bright and insightful gentleman.

As for what’s next, it’s back to freelancing and part-time retail. If you are looking for someone to fill a writing need, contact me today. In the meantime, I’ve added RSM to my portfolio here, outlining the kinds of things I did for them.