I keep reading Evan Spiegel’s vision statement for Snapchat and it keeps making less and less sense. I’m a fairly bright guy who’s been working in content marketing for 15 years and so have been following the rise of social media since its inception. But the way Spiegel frames social media as a whole and Snapchat specifically is something I just can’t wrap my head fully around.

First, he doesn’t seem to have any understanding of the history of social media platforms. Early on he makes the distinction between “social media” and “communication applications.” Snapchat, WhatsApp and other services are part of the latter while, presumably, Twitter, Facebook and others are lumped into the former. There’s always been a line between public and private communication, though. That’s not something Snapchat or any other platform invented in the last five years. Snapchat hasn’t enabled anything that wasn’t already available via SMS/text, email, phone calls or written letters. Also, the notion that messaging apps are somehow free from judgment doesn’t really hold water. The pool of people chiming in might be smaller, but it’s not a wholly safe space.

Second, Spiegel lays the blame for “fake news” at the doorstep of social networks because they enable content to be shared so seamlessly, free of critical thought. That’s a fair point, but the idea that a lie or false statement can’t pass from one individual to another via private communication isn’t accurate.

Third, the point he makes about algorithms, content recommendations, and machine learning doesn’t make quite the differentiation he seems to think it does. Spiegel posits that using the user’s own behavior to make content recommendations is better than factoring in the behavior of friends. That’s not a bad idea, but as anyone who’s used Netflix (his example) or Spotify or other services that employ that model knows, it has the potential to create a feedback loop. Nothing new is ever introduced because it doesn’t match previous behavior. The constant repetition only hardens the system’s belief that’s what the user wants to see. He’s not the first to believe that an algorithm can be created that strikes the balance between that and bringing in other points of view or, as he warns, manipulation by malicious actors.

Spiegel’s best argument is for the separation of, to use his phrase, “the social from the media.” The main problem with most social platforms is that these two are mixed together along with marketing, conspicuously absent from his equation. Twitter’s firehose could show you three updates from personal friends or professional contacts followed by a sales pitch from a consumer products company followed by breaking news from a news outlet. That sometimes creates a bit of whiplash. So having a “friends” feed that’s distinct from the “news” feed makes a certain kind of sense.

Twitter allows you to do this through Lists, which isn’t a hugely popular feature but which lets you curate different experiences.

But Facebook just a month or so ago raised the ire of journalists and media pundits when reports of a test along these lines emerged. That would have broken updates from Pages out from the primary News Feed. Publishers and marketers threw their arms up in outrage at the time, concerned that no one would visit that News-centric feed and they would lose whatever organic traffic they still received by posting to Facebook. The company quickly released a statement saying it was a limited test and not a major change coming anytime soon.

That Snapchat is now being hailed for roughly the same idea says several things. For one thing, it’s that the tech press is much more welcoming of an idea when it comes via an op-ed from a founder that’s positioned as innovation then they are of changes they don’t receive early notification of. Also, it communicates Snapchat’s *actual* standing in the media world. If it were an essential platform for more than a handful of players, this would have been received much differently.

Snapchat has always positioned itself as the “anti-social” network. That was part of the appeal among young users who were drawn to the very elements Spiegel lays out in his statement, from the lack of public, archived feed to the visual focus the app had from the beginning. That’s also been part of why the olds (like me) have had such an issue adapting to it. Facebook, Twitter, Instagram and other “traditional” networks all basically worked the same way blogs did and do and so were easy to adopt. Snapchat was never like that and I don’t see anything in the redesign that’s been announced that changes that fundamental premise. 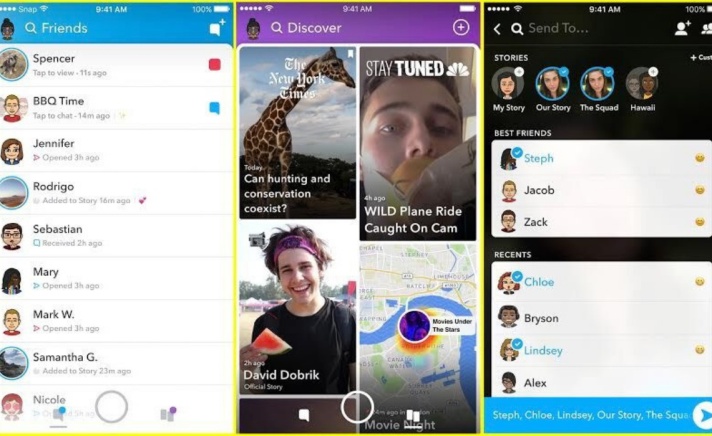 There’s a lot riding on this given the poor quarterly showing it recently reported, with user growth stagnant and a host of other issues. But I’m not seeing anything truly new in Spiegel’s pitch that’s going to ease the on-ramp for new users. There are some intriguing changes, but the lack of historical context those changes are being put into by him or the press is not only shocking but also shows nothing is likely to change anytime soon.