There’s a scene from the 1994 Tom Clancy novel adaptation Clear and Present Danger I think about a lot. The president has just learned a longtime friend of his was just killed by members of a drug cartel he appears to have been involved with and is receiving advice from staff on how to handle the crisis. Most everyone in the room is telling him to distance himself from the guy, downplaying the friendship to a casual acquaintance. Jack Ryan (Harrison Ford) grumbles and says no, the president needs to make it clear the two were close personal friends. The facts will come out eventually, so own up to it now and give the press nowhere to go.

That scene came to mind once again over the weekend when I saw the following Tweet from McDonald’s making the rounds.

Obviously, someone in advance of the long weekend had accidentally moved this update from “drafts” to “scheduled.” It was a placeholder that should have been removed long ago, meant to show that there was something planned for the day but that what exactly it would be hadn’t been determined yet.

There are lessons here about editorial calendar management and workflows and all that, sure. Most times the Tweet would have been deleted and an intern blamed for letting something like that slip out. Instead, not only is the Tweet still alive, but the company seems to have a sense of humor about it, as shown in the reply it sent to its own update. 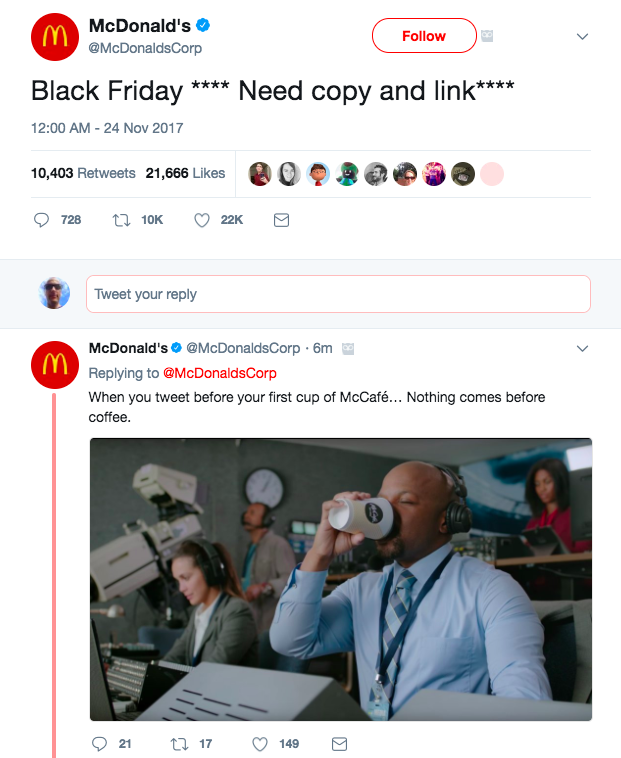 Years ago I found myself in a similar situation with a client I was managing at the time. I wrote a Tweet about a product announcement that included the name of someone involved, someone I thought I was familiar with. So I referred to that person as “he.” The update went live and the replies started coming in that no, it was a woman. This was early on in the client relationship and so a brief conversation with the marketing team ensued where I rightfully had my hand slapped a bit.

They wanted me to take the Tweet down but I argued doing so was disingenuous. Yes, it was a mistake, but it wasn’t fatal. Instead, I convinced them to let me post a reply basically admitting the mistake and blaming it on some fictional construct that resulted in crossed wires. After I did so everyone in the audience seemed to laugh it off and we all went on with our days. Importantly, it set a precedent for the future, allowing us to quickly make light of the few times we made a non-fatal error in our program.

I prided myself on the fact that for a program that published 1,200 updates a month across almost two dozen profiles, our error rate was roughly .0025, a quarter of one percent. That included everyday typos along with misspellings of branded elements. That’s a testament to the editorial workflows that were in place as well as the talent on the team I managed.

When we did commit an unforced error that was a bit more serious, we tried to lean into it and admit the mistake in a good-natured way that placated fans and proved that having a sense of humor and admitting you’re human is a good approach. Too many marketing types believe every misstep needs to be erased from existence as soon as possible and its very existence denied, lest someone begin to believe the brand is less than perfect. On social media, though, acknowledging the error and laughing along with the audience is often the better approach. Doing so can have more benefit for brand reputation – you’ve shown not only are you fallible but that you’re not going to throw some mid-level program manager under the bus – than whatever negative impact you’re afraid such errors might result in. You’ve gained more than you worried you might lose.

My one hope here is that the person who was responsible for this going live didn’t feel any behind-the-scenes repercussions. These are opportunities for learning and evolving the program, building in more safeguards or at least evaluating current processes, not for punishing someone who accidentally clicked the wrong button as they were trying to get ready for the long weekend.