News has been bouncing around online today that Warner Bros. is at the very least kinda sorta considering the idea of creating a feature film version of the Superman: Red Son story from the comics, hearing pitches from various directors about how they’d tackle the project.

If you’re not familiar, Red Son is what DC Comics usually refers to as an “Elseworlds” story, one that takes place in an alternate reality that’s completely separate from the main DC Universe. There’s always the potential for universes to collide, of course, and various mainstream character have bumped into this incarnation of the Man of Steel from time to time, but it’s not part of “our” world.

Everyone knows Kal El crash-landed in Kansas, U.S.A.. What Red Son, as written by Mark Millar in 2003, presupposes is: What if he didn’t? What if instead he landed in the Soviet Union during the height of the Cold War? Instead of being brought up to embody the spirit of small town America, where you help everyone and believe justice prevails, Kal is instead raised in Ukraine to believe in the expansion of socialism and the almighty, unquestioned power of the soviet collective.

While the comic, released in a three-issue “prestige” format, came out 14 years ago, the political winds have shifted since then. Where Russia was considered for decades as being, in general, an opponent of the U.S., now America’s ruling political party is alternatively denying collaborating on election tampering with Russian state actors or saying even if they were that’s not even a crime, man. So relations with the former Soviet Union are at an odd place in history. All of that would make a marketing campaign for the movie…well, it would be interesting to watch. Let’s do some speculating:

It’s easy to imagine WB adhering fairly closely to the trade dress for the collected edition of the comics, which shows Superman standing upon a platform that’s shaped like his traditional symbol but with the Soviet hammer and sickle inside it instead of the “S” that we all know. The same symbol adorns his costume, which is now not blue, red and yellow but dark brown and red, the colors of the Soviet Union.

That might be a tad overt for the mainstream U.S. audience, though. Instead a poster might take a more mysterious approach, showing Superman largely from the rear, perhaps walking away from the camera and toward something that’s clearly Russian like the Kremlin building in Moscow. The symbol doesn’t have to be shown since, again, it would might be a bit much to swallow. So it’s going to use shadows, shading and other visual cues to sell the idea of an alternate, non-traditional Superman. It doesn’t have to explicitly sell the idea of a Soviet Superman, just one that’s not Christopher Reeve.

A teaser would take a similar approach to what I’ve outlined above for the poster, hinting and teasing the idea that this Superman isn’t who we’ve all known for 75+ years. In fact a slow-motion shot of him walking toward the Kremlin as we see more aspects of his different costume are shown could be supplemented with title cards that lay out the premise, that at the height of the Cold War a strange alien craft crashed in a rural part of the Soviet Union. The alien aboard grew up to fight not for liberty and justice, but for the forces that opposed those ideals. 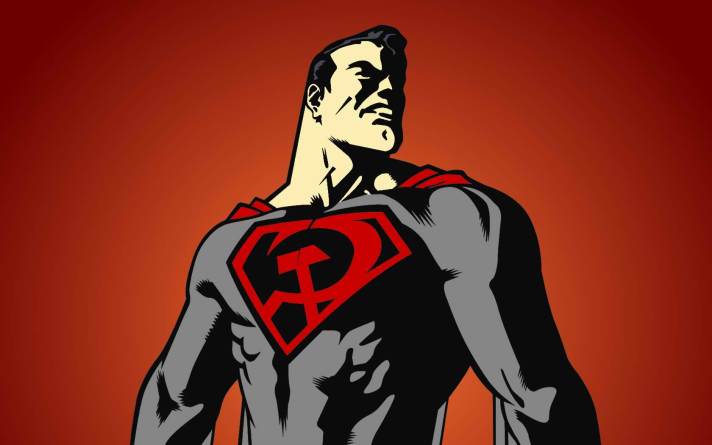 A full trailer would be a bit more difficult in terms of masking the very, very Russian tone of the story. We’d have to see Kal’s craft landing on the Ukraine farm and the child being whisked off by government agents to test him. I’m imagining a montage of Kal’s strength being tested that, in my head, plays out like Drago’s training montage in Rocky IV.

This one could focus not on the political ideals of the characters but instead on the conflict between Superman and Lex Luthor, who in this story has been elected President of the United States. (This keeps getting too real.) Cut out the bits of the story that involve Luthor enlisting a Russian-trained version of Batman and using a cold, heartless characterization of Wonder Woman as bait and stick with selling it as Superman vs. Lex Luthor, the essence of any good Superman story.

There are multiple elements of the source material that make it almost unfilmable, including Luthor creating a global American empire and curing all disease before living for 1,000 years, variations on the Green Lantern mythology, Brainiac’s involvement on both sides of the conflict and much more.

Beyond even the story logistics, though, it’s hard to see how this is successfully sold the audience. The current cinematic incarnation of Superman as played by Henry Cavill only has two movies under his belt, 2013’s Man of Steel and what amounted to a supporting role in 2016’s Batman v Superman: Dawn of Justice. He’s been completely absent from 95% of the marketing to date for Justice League, coming later this year.

So would Cavill play Red Son Superman? How would the marketing convey to the audience that this is an alternate reality and not the same DC Cinematic Universe that only really got off the ground for fans with Wonder Woman? And how would the dark, dystopian tone of Red Son go over after Wonder Woman was praised by fans and critics alike for its hopeful, optimistically-heroic tone that was such a contrast to Man of Steel, BvS or Suicide Squad?

Those are the real questions Warner Bros. would have to answer as it not only produced but eventually sold a Red Son adaptation to the mass audience. While the project is still barely, if reports are accurate, in the larval stage, they’re still hanging out there and will have to be addressed before a single frame is shot.