I think we can all agree that, to date, the definitive cinematic version of the King Arthur story was the one told in Monty Python and the Holy Grail. That’s just science. But this week director Guy Ritchie is going to throw another contender in the ring with King Arthur: Legend of the Sword. Despite having a title like the third entry in a video game franchise, the movie is not a sequel but instead offers Charlie Hunnam in the title role as Arthur, the man who would be king.

“Would be” is key here as in the story Arthur has had the kingdom that is his birthright stolen and kept a secret from him, growing up a hardscrabble rapscallion. When he, through some means or another, pulls the magic sword Excalibur from a stone he gains an insight into his destiny and joins the forces taking up arms against Vortigern (Jude Law), the less-than-benevolent current ruler of the land. He will do whatever it takes to not only quash the rebellion but also take out Arthur and stop the one man who could actually oust him from his comfortable position.

The first poster looks like an outtake from an Anton Corbin photoshoot for the pictures for a mid-90s U2 album. It’s a black-and-white shot of Hunman, standing stoically and looking out into the distance while clutching and leaning on the sword we all know symbolizes his right to rule. The title treatment is in purple to stand out from how it’s overlaid on the photo. I get that it’s meant to show this is a gritty movie but it just comes off a bit pretentious, as if they literally couldn’t figure out any other way to introduce the character other than through someone’s junior-year photography class final project. Plus, is Hunman that big a star that he can just be there with little supporting material or information and still be expected to sell the movie?

“From nothing comes a king” we’re told in the latest example of a poster that aims to make an impact by putting bold copy over a stark closeup of the lead actor’s face. Hunman looks grizzled and worn here in a shot that’s designed to appear as bleak as possible. A similar poster featuring the face of Law used the copy “Temptation blackens the heart,” which sounds like a lyric from a Christian speed metal band and other characters got similar treatments.

Another poster, maybe the theatrical version, just shows a full-body shot of Hunnam standing there with sword in hand. “From nothing comes a king” we’re again told on the one-sheet, which also again touts this as coming from the director of Sherlock Holmes. It’s not that interesting, just a publicity shot with the title treatment and some other elements laid over it.

The first trailer is so very Ritchie. It starts out with Arthur and others on the run through a city, footage that’s intercut with someone asking him to tell the story of what happened. Arthur is presented as kind of a cad and a scoundrel right up to the moment he attempts, successfully, to pull the iconic sword from the stone. That sets into motion a series of events that appears to lead to war with…someone, presumably a neighboring kingdom that wants what Arthur’s land has.

Hunman looks completely bland in the role. It’s possible this isn’t actually an actor we’re watching, just a bag of straw that’s being controlled like a marionette. Law chews the scenery around him as the bad guy, but it just reminds the audience that he’s never given a leading role of his own in Ritchie’s movies. Overall this looks like it turns King Arthur, like other characters such as Sherlock Holmes, Tarzan and others, into a super hero in need of an epic origin story where he rises to the potential he didn’t know he had.

We meet Arthur in the next trailer as a young boy who’s being spirited away from danger by his father the king. Cut to him as a grown man as someone who’s living in exile until he comes out to claim Excalibur. But there’s another who wants that power and will fight to take it for himself. So there are two conflicts, one between the two men who are vying for power and one within Arthur himself as he struggles to embrace his destiny.

So…Excalibur is some sort of magic sword that imbues the weilder with powers of speed and more? That seems different. It’s a big, ridiculous trailer for a movie that seems to make an epic spectacle out of what always seemed a more personal story. Again, there seems to be an effort to keep Hunman in the background to some extent, focusing more on the big visuals than on his actual story. Basically it appears that any excuse the trailer could find to not include the title character, it took.

The final trailer is mostly more of the same, showing Arthur’s reluctant journey to become king even as the current holder of that office wants him found and dead. There are training sequences and fights and dramatic slow pulls and CGI armies talking of becoming more than a myth and magic and dragons and so on. It all looks utterly ridiculous.

The key art of a black-and-white Hunnam looking like he’s promoting his album of 1960’s soul covers greets you when you launch the official website. At the top are links to the movie’s Facebook, Twitter and Instagram profiles as well as prompts to email a link to the site to someone you know or to buy tickets.

Down at the bottom of the front page are lots of options if you care to engage in any of a number of movie-related activities. You can find out more about the mobile game, download the VR experience, generate your own version of the poster, find out when the “Sword in the Stone Tour” is coming to a location near you or listen to or buy the movie’s soundtrack.

Going back to the content menu that’s in the drop-down found in the upper left, the first section there is “Social” and just has a few posts that have been published to a Tumblr blog and which can be shared if you so choose. All three trailers are all you’ll find in the “Videos” section.

The “About” section has a decent synopsis of the story along with the usual credits of those involved in the movie’s making. A whopping three stills can be found in the “Gallery.” The site finishes off with “Partners” and information about the companies who signed on for cross-promotions in some manner.

The first extended TV spot sells the movie as a science fiction “claim your birthright” kind of story involving embracing your destiny and defeating some kind of massive creature that’s destroying castles and kingdoms. It’s full of spectacle but tells the audience almost nothing about whatever story the movie might have. Future TV spots hit on the same or similar themes, selling the movie as a big action movie about embracing your destiny. Spots closer to release sought to tap into peer recommendation by featuring Tweets from fans who had seen it already and who were enthusiastic in their reactions.

Warner Bros. was the first to buy into Snapchat’s sponsored puzzle-game selfie ad unit, allowing people to put a robe and crown on their pictures and then unlock a puzzle, with their time posted to the image. And of course there was a 360-degree VR experience that took viewers inside the world of the movie and let them explore a bit while trying to not die.

In terms of promotional partners, there are a few that were listed on the official website, including:

The first look at the movie came in the form of stills in Entertainment Weekly showing off Hunnam and Law. A little bit later the movie would be part of WB’s overall Hall H presence at San Diego Comic-Con, where the cast and crew made comments about it.

Ritchie spoke later about how he wanted to do something different with the Arthur story, what was behind the multiple release date shifts the movie has undergone and more, including details about the effects and visuals in the movie. Hunnam talked about how he created the character in EW’s summer movie preview. 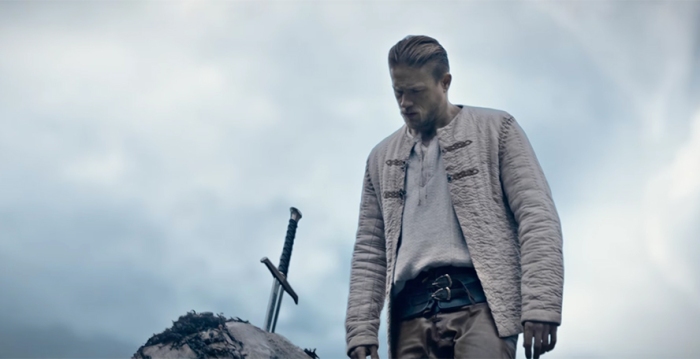 Hunnam and Ritchie in particular did the press rounds of talk shows and more, talking about making the movie, the challenges of the story and everything else. The campaign dovetailed with Hunnam’s promoting of The Lost City of Z, which came out just a few weeks ago, so the two often overlapped and if that publicity push seemed small, with a focus on director James Gray, it’s likely because the actor was being saved for this release.

Getting over my belief that Charlie Hunnam isn’t actually a human actor but the result of a Hollywood exec feeding a machine pictures of other leading men in an effort to create the blandest, least memorable movie presence ever…actually, I don’t have an ending to that. Hunnam’s lack of screen presence really comes through here as he fails to hold what little attention the campaign, particularly the trailers, give to him. Yes, he shows up on the posters, but in the trailers we want to watch him as little as possible, getting straight to the part where the sword gives him super powers to fight dragons or some such.

Instead the focus seems to be mostly on Law and his scenery-chewing bad guy. The campaign wants to sell this as a big action movie with a wounded, reluctant hero at its core, but the stakes are never clear here. The trailers for Gods of Egypt made that story more understandable, and that’s a low bar to clear. It’s all science-fiction action instead of political intrigue as Arthur tries to reclaim his rightful throne because reasons, all of it presented in a muted color palate that even Zack Snyder probably thinks is desaturated a tad too much. It’s hard to see how this makes a meaningful impact at the box office unless Guardians Vol. 2 suffers really bad word of mouth and drops significantly.