Politics and family dynamics form the core story at the heart of The Dinner, getting a limited release this week. The movie stars Richard Gere as Stan Lohman, a congressman who’s beginning a campaign for governor with the support of his wife Claire (Rebecca Hall). Those ambitions are threatened by the actions of their 16-year-old son, who along with his cousin, have committed a crime that’s drawn national headlines but to which they haven’t yet been tied. The connection would, of course, derail Lohman’s plans.

To discuss the matter the couple plan a dinner with Stan’s estranged brother Paul (Steve Coogan) and his wife Katelyn (Laura Linney). Over the course of the meal, the four must navigate their own family history while deciding on what next steps to take: Disclose the truth and derail Stan’s planned governorship while also sending their children to jail or keep the truth buried, allowing everyone’s life to go on uninterrupted?

The primary poster uses a familiar design, the five vertical stripes down the length of the design. Four of the five stripes feature a different member of the cast, going from Gere to Linney to Hall to Coogan. The fifth, in the middle, has the title, cast list, and a note about how it’s based on a best-selling novel. In between some of them is copy asking “How far would you go…to protect your children. Each photo has a background of a tastefully-lit restaurant, with ornate lights and classic wooden wall features, helping to establish the setting. All that combines to convey the message that the movie is about making hard choices but takes place primarily in a high-end dining establishment.

The first trailer starts out with introductions to the main characters, including a candidate for governor and his brother, who’s resentful of the former’s success and style. Stan has called for a dinner with the two of them and their wives to discuss a family matter, which we find out involves a crime that was committed by the sons of both couples. Stan wants the truth, which has been covered up, to come out but that isn’t an opinion that’s shared by everyone at the table. The drama amps up from there.

It’s alright, selling a variation on the white people’s problems that are the theme of so many movies. There may be some real digging into issues here, but the trailer just sells what amounts to an emotional dinner conversation. The stakes of that conversation are hinted at a bit but there are also a few side stories that slip in there that aren’t fully explained. Again, it’s good at selling an important family decision-making dinner, but it may not go far enough in showing off just what’s happening to pull all these people together.

Scenes from the trailer play in the background of the front page of the movie’s official website. Amidst all that is the title and a reminder of the release date. Down in the lower left are both a link to the movie’s Facebook page and a quiz to find out what the amount you tip restaurant servers says about you as a person. That only works when you visit the prompted URL on your smartphone, though.

Back to the top of the page, which is where there’s a content menu to go through. First, there is “Synopsis, which lays out who the characters are and what the moral dilemma they’ll be wrestling with is. After that, the “Cast” section basically recreates the poster art as it associates the actor with the character they play.

“Press” presents a few positive critical pull quotes alongside some photos from the movie. There are seven stills in the “Gallery” section. “Novel” then has information on the source novel (which is set in Amsterdam, it seems) and links to find out more about author Herman Koch’s other works. Finally, you can watch the “Trailer” again.

Nothing that I’ve seen. There may have been some online or social advertising done but if so it didn’t make my radar, nor was I made aware of it.

The cast and crew appeared at the Berlin Film Festival along with the movie to talk about shooting, the story and more, including Linney talking about working with Gere, the family-driven elements of the movie and more.

It also later appeared at the Tribeca Film Festival, where it again accumulated positive word of mouth and reviews. There Chloe Sevigny talked about the chance to work with Gere, Coogan admitted his Richard Gere impression in The Trip may have helped his casting and the rest of the cast generally commented on things. 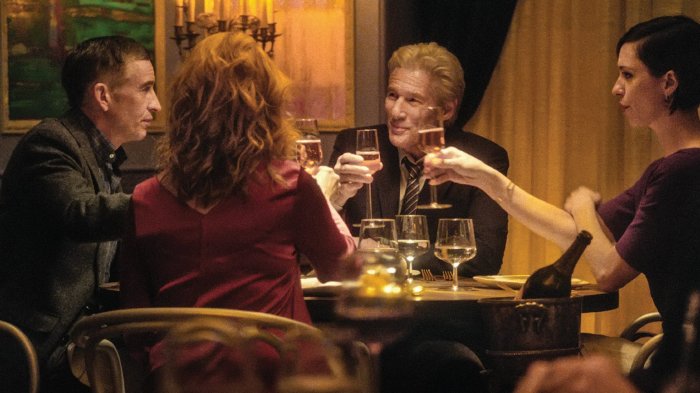 This movie, like Norman which came out a few weeks ago, became part of a narrative of Gere’s career comeback after a bit of time out of the spotlight.

There’s some good stuff in here as the campaign sells a pivotal moment in the lives of the characters we’re following, as well as the lives of their children. Everyone will be impacted by what transpires here and we’re promised a tense drama that shows otherwise good people making hard choices to follow, for one reason or another, the path they feel is best. The conflict, then, comes from how what one person sees as the most sensible and correct course of action for themselves and their children. It may suffer a bit from being yet another “white people with money try and figure out how to stay out of trouble” story, but that can’t be held against the marketing fully.

In terms of visuals, everything here is pulling from the same color palate. It’s all browns and yellows, whether the action is taking place in a bedroom or the restaurant where the confrontation happens. That gives the whole campaign a nice sense of visual consistency that works in its favor. The focus on Gere and the rest of the cast also works nicely to sell a character-driven story featuring a high-caliber collection of actors.

One thought on “Movie Marketing Madness: The Dinner”