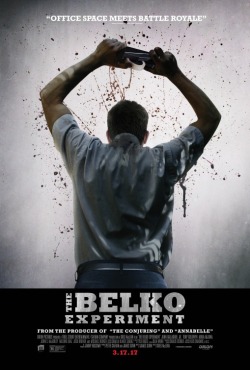 James Gunn, he of Guardians of the Galaxy and more, returns to his indie horror-comedy roots with this week’s The Belko Experiment, which he produced and wrote and which was directed by Greg McLean. The movie takes place in a remote office building staffed by ordinary people working their non-descript jobs. One day things take a dark turn, though, as suddenly the employees are locked in the building and told over the loudspeaker that management demands a certain number of them die before the rest will be released.

That pits everyone against each other as those who were congenial colleagues one moment suddenly turn into bitter and deadly rivals. The unseen instigator keeps upping the stakes, asking for more employees to be killed, all part of some odd social experiment. Those who survive just want to make it through the day. Anyone who tries to escape is killed by the mysterious force pitting them against each other, meaning the only way out is by taking out their coworkers.

The first poster lays out the premise in a positive early review quote at the top that labels it “Office Space meets Battle Royale.” Below the title treatment toward the bottom the producers get a shoutout and their previous movies name-dropped to build some credibility with the horror audience. The main image just shows an ordinary worker in a dress shirt and slacks, his back to the camera and a tape dispenser raised over his head, with blood spattered on the wall in front of him. That hints at something gruesome and not at all right going on her.

A series of later posters asked audiences to “choose your weapon,” with each one showing a seemingly innocent and harmless bit of office equipment that has apparently been put to bloody work.

Another set of posters featured the various characters looking bloodied and wartorn, with some sort of innocuous phrase like those you’d find on break room signs behind them.

The first trailer starts out by presenting the Belko Organization as a normal office workplace. Soon, though, a mysterious announcement tells everyone that three employees need to die or everyone will be killed. The windows of the building are sealed up and attempts to get out are unsuccessful or lead to further killings. The stakes increase as the demands by the unseen captors become more and more bloody and the people stuck inside become more and more desperate.

This looks like just the kind of fun, over the top horror comedy Gunn and others are well known for. The story is laid out pretty clearly – at least the outlines are – without spoiling too much. What this promises is an outrageous premise about human beings turning on each other, which is always more interesting than unstoppable inhuman killers.

A second, shorter trailer cuts some of the setup and gets straight to the insanity. It’s still really good, just tighter and with less exposition. Another version adds a little bit of setup to it but it largely the same spot.

There doesn’t appear to have been an official website created, so the movie relied on a Facebook and Twitter profile to act as its online presence. There the studio shared updates on marketing activities, promo images and so on, but nothing all that substantive.

A TV spot or two was run that tried to distill the trailer down to its essence. So you get that the office workers have been pitted against each other in a game of kill-or-be-killed. You see some of the mayhem and chaos that ensues and the lengths people will go to in order to survive.

The movie picked up distribution shortly after it debuted at the Toronto Film Festival. There were small bits of publicity as some of the cast appeared here and there but nothing major in the weeks leading up to release. Instead most of the press coverage came from the release of marketing materials.

There were some additional publicity pops from officially-sanctioned trailer recreations in both LEGO and claymation form.

“Workplace horror” is a very specific niche but that’s what they’re going for with this campaign. It’s all about selling the chaos that ensues from ordinary people being put into a high-stake, life or death situation with nothing to rely on but themselves. That message, that the office place is all of a sudden the deepest darkest jungle with

“Workplace horror” is a very specific niche but that’s what they’re going for with this campaign. It’s all about selling the chaos that ensues from ordinary people being put into a high-stake, life or death situation with nothing to rely on but themselves. That message, that the office place is all of a sudden the deepest darkest jungle with survival of the fittest being the order of the day. The movie is sold as a dark comedy about just trying to survive the workday, which is all any of us is trying to do.

There’s also, understandably, a strong emphasis on Gunn himself. His stock has gone up considerably in the last three years or so so it makes a lot of sense that his name would be prominently displayed throughout the campaign. As stated, this is a return to form for him, back to the dark and violent comedies of Super, Slither and so on. It all adds up to a campaign that won’t appeal to the average moviegoer looking for a movie from the director of Guardians of the Galaxy but which may have something to offer fans of strange, slightly deranged horror comedy.