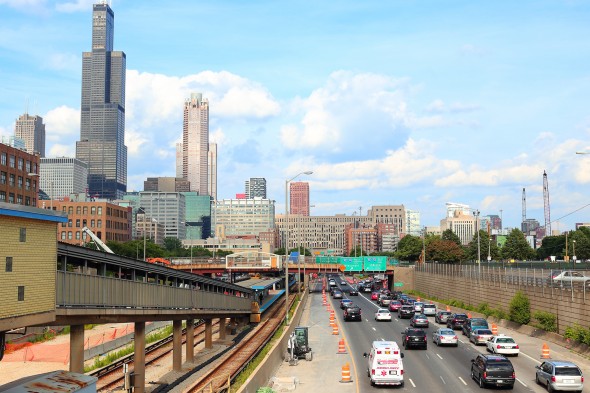 I’ve been spending a lot of time on Chicago-area expressways recently, commuting back and forth to the city as I run between a new freelance contract position and my part-time retail job on days when those schedules butt up against each other. When I was working full-time downtown I was a regular train rider, largely because I don’t have the patience for driving that much and would like to either read or get some writing done on the trip, not just sit there trapped in my car and getting frustrated at the radio. Driving on those roads during rush hour means I’m spending a lot of time at best creeping along if I’m not standing still completely for minutes at a time, watching the El rush by me or just missing the train experience.

Mass transit is inarguably a better idea. It’s better for the environment, it’s more efficient and it doesn’t require nearly as much infrastructure. And it’s more and more essential the further you go down the income ladder, with inner-city workers needing it to get to the job – or jobs – they have because owning a car is too expensive and unreliable. But oddly it’s something that isn’t incentivized in any way.

Some employers will offer transportation benefits, allowing you to set aside a portion of your paycheck in a way that reduces the tax hit on money you’re going to be spending anyway. But what’s missing, I think, is something along the lines of the deduction that can be taken on home mortgages. We as a society have identified that home ownership is something that should be encouraged and so that benefit is offered to those who make that choice. So why isn’t there a similar incentive offered to those who take public transit?

There’s a storyline in the Cameron Crowe movie Singles where Campbell Scott’s character is trying to create a new mass-transit system that will offer people coffee and other amenities in an effort to get them to ditch the cars that are clogging the Seattle area’s roads. The plan is shot down on the simple premise that “People love their cars.” And I’m sure similar thinking, along with a from the automobile and oil industries, has killed many initiatives along these lines, whether it’s the kind of incentives I’m proposing here or simply better investment in mass transit systems around the country.

I can’t think of a better way to get people to make the switch from individual cars to public transportation than some tangible benefit for doing so. While local and state governments wrestle with how to categorize and regular ride-hailing services like Uber and Lyft and the valuations for those companies continues to grow, those are the wrong conversations to be having. One Uber ride could cost as much as a monthly bus pass in some areas, but the bus service there may not be conducive to many people using it so it’s not a viable option. But it’s the only option for those who can’t afford those pricey private services, so someone on the lower end of the income spectrum may be dependent on those mass transit services whose income is being eaten into.

To put it simply, what I’m proposing is that cities and states do two things:

First, develop a series of incentives, likely in the form of tax deductions or other tangible benefits, for any level of mass transportation usage. This should be applicable and available to everyone, regardless of whether we’re talking about daily bus fare or monthly train passes. Have it make sense for them to use this as their go-to choice. Not only will it benefit those at all levels of income but it will be good for the environment since one train carrying 300 people has less of an impact than 300 cars carrying one person each, a problem even Uber or Lyft doesn’t solve.

Second, invest in the mass transit that’s available. Use the additional income that comes with increased usage and upgrade train lines, offer wi-fi on buses and so on. Provide a tangible daily benefit for choosing the better of two options by offering a pleasant experience.

I’m not sure if this is the absolute best solution and I suspect that push back to it would be as firm as it is predictable. And let’s be honest, the current presidential administration hasn’t exactly signaled it’s looking out for the best interests of the environment or the individual. But something needs to change in how we approach the issue of transportation that will be beneficial to all parties, not just those who can easily afford regular Uber trips.