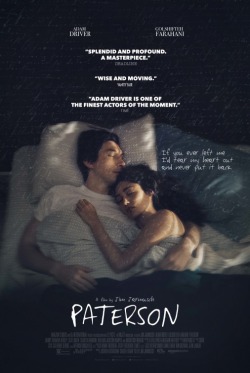 Adam Driver stars as the title character in Paterson, the new movie from writer/director Jim Jarmusch. Paterson is just kind of a good guy, living his life according to a comfortable routine in his hometown of Paterson, N.J. Yes, he shares a name with the town he lives in, which is part of the conceit of the story. He has a predictable life and lots of friends as well as his girlfriend Laura (Golshifteh Farahani), an aspiring songwriter.

Paterson himself is a poet, scribbling verse in his notebook everyday after driving his local bus route. So the movie is about following a self-assured, artistic soul through his every day existence. It doesn’t appear there’s anything big that happens, no massive moments, just the routine of living and breathing and expressing yourself in small ways.

The poster features a startling declaration: “If you ever left me I’d tear my heart out and never put it back.” Yikes. And the impact of that statement is made all the more disturbing by how it’s displayed in handwriting, making it very personal where a more formal type would have removed some of the emotion, a smart call by the design team. The image is simple, showing Driver and Farahani lying sleeping in bed, so it’s assumed that scrawled promise is coming from one of them. Some critic quotes from festival screenings are at the top to show the movie has already been well-praised, which should help sell the movie to a more discerning audience.

Poetry is at the heart of the trailer, which introduces us to Paterson the place and the man. He’s an easygoing, affable guy who drives a bus around town, something that seems to bring him genuine joy as he’s able to interact with a variety of people and hear their stories and get small insights into their lives, which we see happen throughout the trailer. He’s an aspiring poet, something his girlfriend, herself an aspiring songwriter, wants to encourage. We see him as a simple man who helps in or defuses a number of tense situations but at the end of the day, he’s quite comfortable in his own skin as someone without pretense or affectation.

Driver’s performance here looks remarkable, as does the low-key nature of the story. He looks like the sort of everyman who you wouldn’t glance twice at if you passed him on the street but who sees everything around him. It’s the story of an open, sensitive soul who feels it all but betrays nothing. It’s not clear what the through-line of the story is here, just that it’s about this one man and the impact he has on the people around him.

The “Videos” section that leads it off has the trailer as well as a handful of clips from the movie. That’s followed by a “Story” section that offers a synopsis of the plot that explains just how much – or how little – is going on and where the focus of the story will be.

You can scroll through a handful of stills in the next, untitled section and then view some of the blog posts Bleecker Street has put up on various topics related to the film and its cast and crew. After that there’s a carousel of pull quotes from early reviews, followed by links to the movie’s Facebook, Twitter and Instagram accounts.

Nothing I’ve come across, though it’s likely safe to assume at least some online advertising has been or will be done as the movie gets wider release and then eventually when it comes to Amazon Prime.

The first press for the movie came about a month before its Cannes premiere with the release of a handful of clips. That eventual Cannes screening garnered some very positive reviews and word of mouth for the film. Jarmusch talked while there about how this has been a long-gestating idea of his, how he cast Driver and how he would never direct a studio movie. 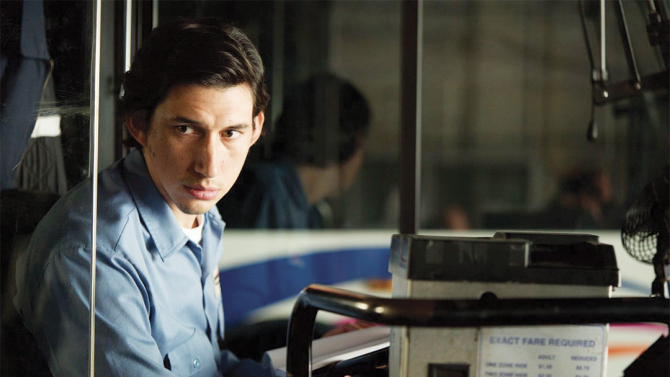 The movie was among those which debuted or otherwise screened at the 2016 Toronto International Film Festival. It was also pegged for the New York Film Festival.

In the last couple weeks Driver has been making the press rounds, including stops on the late night and morning talk shows to talk about the movie and raise a little awareness.

This campaign isn’t going to knock anyone’s socks off, that’s for sure. This is exactly the kind of movie that’s going to fall under the radar of the vast majority of the audience. A small fraction of the people who are aware of Rogue One are also aware of Paterson because it hasn’t received nearly the press or advertising push, and because of Driver’s connection to Star Wars many of his appearances and interviews have turned to that topic in addition to lightly touching on this new movie of his.

The movie that’s being sold here is very much in line with how I’ve already described the title character: Soulful, full of unique poetry and a slice of everyday life. Driver looks like he gives an inspired, simple and elegant performance as Paterson, working through Jarmusch’s poetic camera movements with grace and a sense of self-assuredness. For those who *are* aware of the movie, the word of mouth it’s already generated has likely put this solidly on their list of movies to see as soon as they can.