Based on a true story, Billy Lynn’s Long Halftime Walk seems to be coming along at just the right time in society. The story follows Lynn (Joe Alwyn) through the present day as he’s recruited to be part of a patriotic halftime show during a Thanksgiving NFL game. We also see flashbacks to his time in the Army and what happened to him and the rest of his squad in Iraq that lead to him being feted in the way he is.

So as we follow Billy both during his time in the Army and his time in the spotlight, the movie appears to be tackling an important issue, from the role of the military in the world to the way we deal with and accept veterans and current soldiers when they’re back home. It’s catching us a time when everything is under the spotlight, particularly the respect that’s due to soldiers, police and others. When a football player taking a knee during the National Anthem is front-page news and everyone is discussing what does and doesn’t constitute patriotism, the story of the movie appears especially vital and relevant.

We get a shot of Lynn’s back on the first and one-sheet, showing him from behind has he looks around as fireworks explode in the air. There’s no story explanation or copy point here, just the cast list, the title treatment and the reminder at the top that this movie comes from the director of Life of Pi.

It’s pretty simple for the movie’s only poster. The choice to emphasize some form of the spectacle as opposed to hinting at almost anything about the story is an interesting one, but it’s not clear whether that will resonate with the audience.

The first trailer starts out by showing us Lynn’s point of view at the Super Bowl. That continues to be the framing device for the trailer, which bounces between that and scenes of him in the military and coming home from being at war. The dialogue that’s shared tells us how Lynn is adjusting to life back in the world and what kind of people he’ll encounter and situations he’ll be put in.

It’s an emotional trailer that outlines the broad strokes of the story pretty well without actually offering much in the way of detail. There’s a lot of good stuff here as it sells a drama that will pull on the audience’s heartstrings pretty hard.

It’s surprising then that this was the only trailer. Perhaps the studio didn’t want to spoil too much, but I kept expecting a second trailer that would go a bit deeper on the story or emphasize different elements and in a different way. As it stands, though, this is all that came through.

When you load the official website you’ll see a recreation of the key art that was previously discussed. Up in the top right corner are links to the movie’s Facebook, Twitter and Instagram profiles where the studio has been sharing clips and other marketing materials. All three profiles have a lot of overlapping content, with a bit more fan RTing on Twitter being the primary differentiator there.

Moving into the content menu on the left of the page, the first section is “Trailer” and just has the one trailer that was produced. After that is “Synopsis” and is where you can find a decent write-up of the story that makes sure to emphasize the high-frame rate the movie was shot at.

“Cast & Crew” is just a list of the actors and behind-the-scenes talent but no further career histories or links. Finally, the “Gallery” just has two stills from the production.

TV spots like this one played up the chaotic nature of both warfare and life at home for returning soldiers. It intercuts footage from throughout the movie as it creates a frantic pace, emphasized by the ringing sound that gets stronger as the spot races toward its conclusion. There’s little explanation of the story here, it’s all about creating an emotional reaction in the audience.

No direct knowledge of them, but I’m sure plenty of outdoor and online ads have been run as well. There were no promotional partners that I’m aware of.

Some of the first real publicity for the movie came in the form of this interview with Lee where he talked about the different technology he’s using to make the movie and more just before the first footage was screened for attendees of an industry event. A first look still from the movie came next.

A feature in Entertainment Weekly covered how Lee decided to shoot the movie at an unprecedented 124 fps, the better to catch all the grain and grit in the action sequences and make the images appear more lifelike as well as the difficulties in casting the unknown Alwyn, who had to endure a week of screen tests to get the role. The new technology was also the focus of further press coverage in the New York Times.

It was later announced the movie would have its official debut at the New York Film Festival. Just before that more press hit, some of it talking about the movie’s technical achievements and amazing visual look, some focusing on Alwyn and the short, incredible ride he’s taken after being cast in the movie, his first acting role. Lee and producer Tom Rothman also talked about the long journey the movie took to production as well as covering again the discussion of the high frame rate and other technical innovations. Lee and Alwyn covered similar ground here. 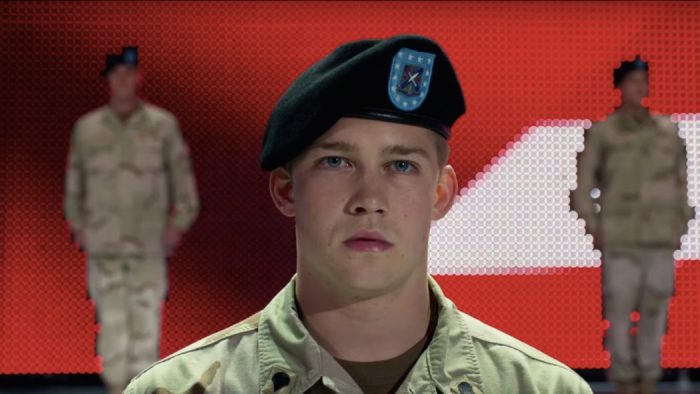 Some of the cast, including Vin Diesel, made the talk show rounds as well.

As I said in the opening, the movie would appear to be particularly timely right now, with all the conversations and debates about what patriotism does and doesn’t look like. And it’s coming just over a year after a report that events like this at NFL games aren’t organic expressions of support for the military but the result of a paid campaign by the U.S. Department of Defense. So there are multiple ways in which the studio can tap into what’s happening right now and make a strong statement.

While there are elements of that in the campaign, it suffers quite a bit from the fact that it’s just not as robust as a large-scale awards contender should be. Just one trailer, just one poster and a website that doesn’t go into any depth on the true story being portrayed all seem a bit lackluster and underwhelming. Add to that the fact that the focus of the publicity wasn’t really the story and instead kept harping on the frame rate and other technical innovations and you have a slightly disappointing marketing push from one of film’s most-admired filmmakers.