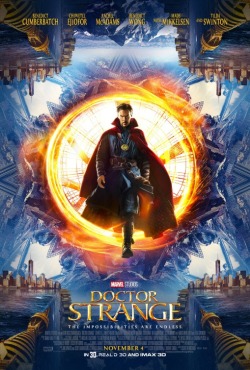 After almost a decade of superheroes with advanced technology suits of armor, enhanced powers due to government experiments and even a trip out into the far reaches of space, Marvel Studios takes us into the world of the supernatural with this week’s Doctor Strange. The movie stars Benedict Cumberbatch as the title character, a renowned surgeon whose career is ruined in a car accident. Despondent, he goes searching for a second chance by learning the ancient mystical arts as a way to heal his hands and reclaim his life.

His training comes at the hands of the Ancient One (Tilda Swinton), a master who has unlocked the secrets of that world. She’s aided by Wong (Benedict Wong) and Mordo (Chiwetel Ejiofor) both of whom become allies of Strange’s as he continues enhancing his skills. But Strange and his comrades are tasked with protecting the world from the attacks of Kaecilius (Mads Mikkelsen), who’s determined to wreak havoc and destroy the world or whatever it is villains do when they’re at work. Let’s see how Marvel and Disney are selling this strange tale.

Two posters debuted around the same time as the first trailer. The first shows Strange from behind, dressed in his iconic cape and looking out through the symbol-strewn window of his Sanctum Sanctorum. The second shows him straight on as he casts some sort of spell or hex directly at the camera.

The one is meant to tease the audience with the look of the character while the other delivers it almost fully, at least from the chest up. So they achieve two different goals, teasing the general audience and then appealing to the fans to allay any concerns about the outfit the character will be sporting in the movie.

A special banner featuring the title character was released just before San Diego Comic-Con that was very arty and in keeping with the kind of artwork that had been produced for other Marvel movies being promoted at the convention. 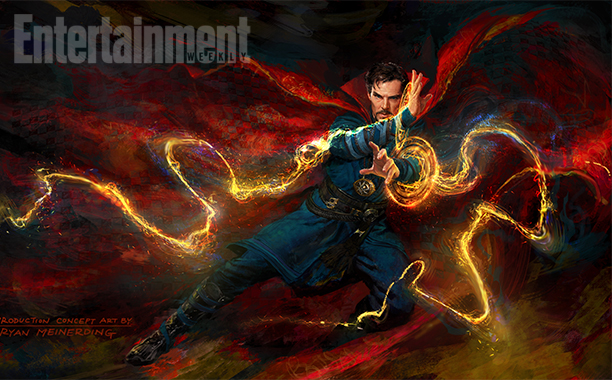 Another poster was revealed at San Diego Comic-Con along with lots of other materials. This one shows Strange striding purposefully toward the camera, walking out of a mystical portal from some other place and into a scene of buildings and roads that are folding in on themselves in ways that aren’t natural and shouldn’t happen. That sense of wonder and mystery is reinforced with the copy at the bottom telling us “The impossibilities are endless.”

A series of character posters came next, one for Strange and each of his compatriots as well as one for Mikkelsen’s bad guy. Each one is set against the reality-bending scene of New York that was seen in the trailers in the background. This is all about world-building through the shots of the characters and brand reinforcement through the rest of the visuals.

A very cool black-light poster was created specifically to be given out to attendees of IMAX screenings. Also on the IMAX front was a poster specifically to promote screenings in that format. It shows Strange looking off to the side so we can see inside his mind, visualized here through circles that have the supporting cast in it. The same trippy scenes are shown in the background to continue that theme.

The first teaser trailer starts out showing Strange in a car accident, followed by the juxtaposition of shots of him doing his job as a traditional doctor and searching for meaning after the accident. Eventually he encounters The Ancient One, who addresses his disbelief of all that chakra mumbo-jumbo and begins to show him the mystical world that exists along with ours. She does so by shoving his astral self out of his body and sending him on various mind trips, with Strange eventually pleading for her to teach him. The trailer mostly shows Strange in civilian clothing but ends with a shadowy shot of him walking up a staircase with his trademark cape.

It’s not bad, selling the movie very much as another origin story. We get quite a few shots of Swinton as The Ancient One along with fleeting glimpses of McAdams as well as Ejiofor as Mordo. It’s also pretty heavy on presenting it as a story of personal growth and self-awareness, with a super hero bent.

The second trailer, which debuted at the same time the movie was being promoted at San Diego Comic-Con, offers a much better look at the story. It starts out with Strange in his previous life as a surgeon and we see the accident and its effect on his hands. Aimless, Strange travels to Tibet where he encounters The Ancient One, who begins to open his eyes to the larger reality of the world, which leads to lots of footage of cityscapes folding in on themselves and so on. We eventually meet the adversary and see that the forces of light and protection are gearing up for a big battle against the forces of darkness. It all ends with Strange being given the Wifi password, which is a nice little touch.

It’s a solid spot but it plays like Inception mixed with Morpheus explaining The Matrix to Neo. Cumberbatch looks like he does what he can as he and the rest of the cast are mostly asked to walk across and in front of green screens, but he brings the necessary gravitas to the role, even if that same role will ask him to dramatically flip a cape around and run through New York City streets.

The official website takes a bit of time to load and when it does the screen fills with motion video. At the top of the page there are a few sections of content lists, starting with a “Gallery” where you can view a dozen or so stills from the movie.

After that there’s a “Synopsis” that offers a decent story recap and finally there’s “Partners” where you can find out about the companies that have helped to promote the movie in some way. There are also big buttons there to buy tickets or watch the trailer. Moving down to the lower left of the screen, there are links to the movie’s Facebook and Twitter profiles. 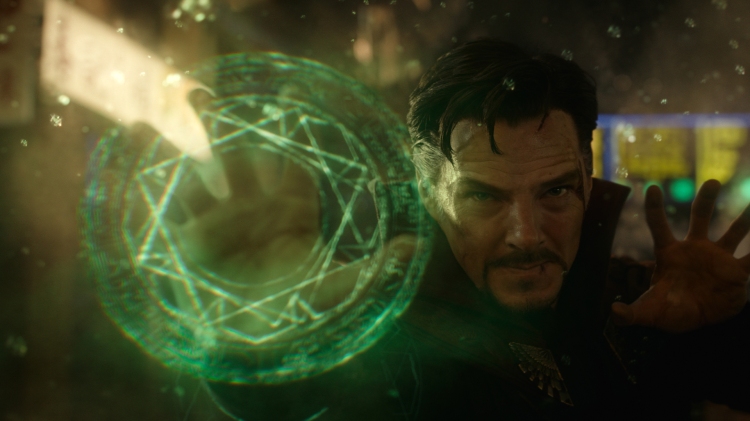 Once you’ve done all that you can “Meet Doctor Strange” as the prompt in the middle of the homepage wants you to. That takes on a journey through Strange’s story, from successful surgeon to student of the supernatural to master of the mystic arts.

At the same time as the release of the trailer post-Comic-Con, Marvel ran ads on Twitter using that trailer in one of Twitter’s quick-response ad units that included a button encouraging fans to Tweet about the movie easily right from their timeline. Ads were also run on YouTube to boost visibility and views of the Comic-Con trailer. Social and YouTube ads ran pretty consistently over the next few months, with general online banners and other ads ramping up in the last month or so before release.

TV spots like this one started running over a month before release. While there were several variations in the TV campaign, most all focused on this being an origin story, showing Strange’s journey from medical doctor to someone who battles with the mystic arts. The reality-bending visuals were on full display as we see cities collapsing in on themselves and lots of fire and other elements being thrown about by everyone.

Promotional partners for the movie included:

Marvel also took the opportunity to add the Doctor Strange character to its lineup of mobile and online video games.

More Twitter ads were run in the week leading up to release, but a lot of them were promoting Doctor Strange-themed costumes for dogs and used the hashtag “#DogterStrange” which is amusing but I have to wonder what the ROI on that campaign was.

The movie’s publicity campaign kicked off with a cover story and feature in Entertainment Weekly that provided the first official look at Cumberbatch as the title character. That feature also included other details on and comments about other characters, including McAdams’ mysterious surgeon, the casting of Swinton as The Ancient One and more. Unfortunately that came with some backlash against the “whitewashing” of The Ancient One, traditionally an older Chinese man but now a white woman. It was something that, after the release of the first trailer, Marvel finally had to address, though their statement just set off more firework.

As part of a whole Marvel invasion of the show, Cumberbatch was announced as a guest on “Jimmy Kimmel Live,” where he was said to debut the first teaser trailer.

Much of the speculation around the movie was about who Mikkelson was playing, a role that was revealed at the same time it was announced a comic prequel would explain who he was and what his motivations are.

The movie was obviously a big part of Marvel’s Hall H presence at San Diego Comic-Con this year with the cast and crew appearing to debut a new trailer and poster and otherwise showing off just a few months’ out from release. Cumberbatch also made some fans happy when he popped up in a line and took pictures with them and more.

Cumberbatch later talked quite about, as in this story, how he decided to sign on to the MCU, what his take on the character will be like and what an experience seeing footage from the movie for the first time was like. 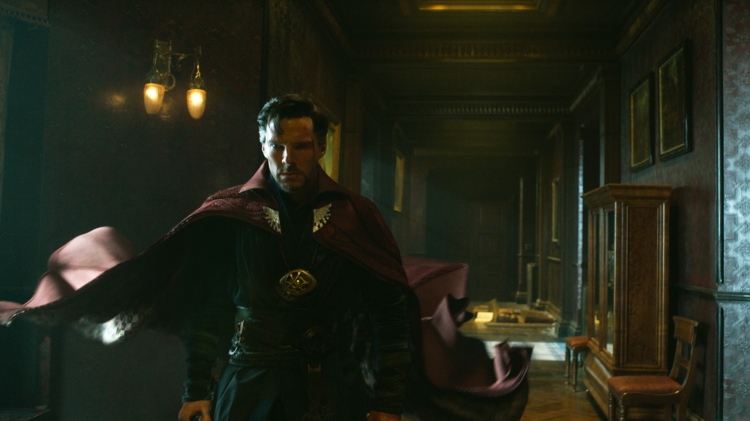 There was also news that Dan Harmon, he of “Community” fame, was brought on board to do some last-minute writing of additional scenes that would be shot after principle photography was over.

At various times, especially after a set visit involving numerous press outlets, the cast and crew talked about developing characters whose allegiances would change over time, creating the magnificent set pieces and much more.

An interview with Cumberbatch along with a series of new photos were part of a cover story in Entertainment Weekly for an issue that was devoted to super hero power rankings and more.

The challenge for Marvel and Disney here is that Strange is a lesser known character to be sure. But he has to be better known than Rocket Raccoon or Star Lord, having shown up in various cartoons and other media over the years much more frequently than those outer space outlaws. Plus, Cumberbatch has scads of name recognition among the general entertainment fan world, something that’s been supplemented by the impressive media push.

The biggest asset that’s been amplified by the campaign is that this is once again an origin story, something that’s been in relatively short supply in the Marvel Cinematic Universe over the last couple years. Not only that, but it’s basically being sold as the same movie as Batman Begins from back in 2005, with an entitled white guy going to Asia for spiritual guidance and purpose. That’s not a bad, thing, it’s smart for the movie to make it clear this is a new hero we’re following, providing for a new franchise audiences can latch on to.

View all of Chris Thilk's posts.