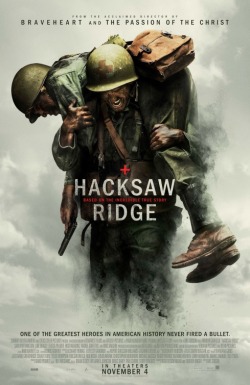 Army Medic Desmond T. Doss refused to pick up a weapon during World War II, citing his religious beliefs as his reason to become a conscientious objector, someone who will not actually take up arms because of some deeply-held moral or ethical belief. Now his story is being told in the new movie Hacksaw Ridge. Doss is played here by Andrew Garfield as we follow him from being drafted from his small town through the Battle of Okinawa and his eventual receiving of the Medal of Honor, becoming the first conscientious objector to be so commended.

The movie comes from director Mel Gibson and, of course, the movie’s story is not as simple as it seems. While on the surface it’s a war movie, nothing is that simple anymore and it can’t be viewed outside of the potential point of view it might have for us on the events of today. So this story of someone refusing, on account of his religion, to take up arms against the enemy but still working tirelessly and heroically to save lives of scores of his friends, is going to have to be viewed in light of not just where we were but where we are.

The first poster is concerned mostly with showing the setting. So we get a shot from behind of Garfield running across a battlefield, with copy saying “When the order came to retreat, one man stayed.” So it’s clear we’re watching a story of unique heroism. This also tells the audience this is based on a true story and comes from the filmmaker behind The Passion of the Christ and Braveheart, though Gibson’s name isn’t pronounced on the poster.

The next one is actually pretty decent, featuring a photo-realistic painted look to the image of Garfield hoisting one of his comrades on his shoulders to show that he’s a healer, not a fighter. “One of the greatest heroes in American history never fired a bullet” says the copy toward the bottom of the poster, which is some sentence structure I’ll take minor issue with. Again, we get Gibson’s credits at the top and the promise that this is based on a true story along with the title treatment.

The first and only trailer, out-of-place introduction aside, opens with Doss preparing to leave his hometown sweetheart to go to war because, as people in movies often do, he can’t sit still while others die. Once he’s in boot camp, though, he refuses to touch a weapon since he doesn’t believe in killing, only healing and helping. That attitude not only brings him into conflict with his fellow recruits, who haze him violently for being a coward, but also leads to charges being brought against him. Ultimately it’s decided he can be unarmed if he wants but he’s still going into war. Quickly, though, his do-no-harm attitude wins the admiration of his fellow soldiers as he shows plenty of bravery on the field, saving people from imminent danger and healing their wounds as best he can.

It’s a touching trailer that, if you can look past Garfield’s accent, pulls on all the emotional heartstrings you’d expect it to. We get the shots of him with his girl, who makes him promise to come home. We get the shot of him yelling in frustration on the battlefield and so on. There’s a lot of paint-by-numbers here, to be honest. But it still presents a movie that might be more than just an interesting side story we’ve never heard before and actually tell something important about war and the soldiers who fight it. Granted, that’s reading a lot into this trailer, but the potential is there.

When you load the official website for the movie you get a version of the key art that also shows a big button encouraging you to watch the trailer again. In the upper right corner are links to the Facebook, Twitter and Instagram profiles that have connected the movie with fans on those platforms.

The main content menu is over to the left and starts with “Story,” which has an alright synopsis of the movie and characters that focuses on the actual movie and not the producers and other behind-the-scenes movers and shakers. “Cast & Filmmakers” has the names, characters and stills of the major players on both sides of the camera, but just that without any further bios or links to deepen the content.

The “Gallery” has a number of stills in it you can view and download, most all of them featuring Garfield. Same goes for “Posters” which is where you can find both one-sheets. The “Trailer” section just has the one trailer.

The last section is pretty interesting. It’s called “Testimonials” but doesn’t actually have any content. Instead it opens a Google Form asking the visitor to share whether Doss’s story has inspired them or a veteran they know. There’s a disclaimer asking you to allow them to use your story in future marketing, but there are no details about what they might be.

There were two distinct forks to the paid TV campaign. Some commercials like this make it clear that Doss is a pacifist who will not be engaging in hostilities. It doesn’t go too in-depth on the full story but doesn’t hide the anti-war – or at least anti-violence – message of the movie. There were others, though, that presented it as a straightforward war movie, often compared to Saving Private Ryan, without explaining anything about Doss’s pacifist perspective or anything else. So it’s hoping that some people will be attracted by the message while others by the sheer spectacle on display.

I’m sure there were online ads and outdoor billboards run as well. Some social advertising was done too to promote the trailer and other videos.

While the movie was debuting at the Venice International Film Festival – to mostly positive reviews and buzz – Gibson and Garfield talked about making the movie, with Gibson admitting he prefers at this point to be directing and Garfield talking about how he feels Doss is an example we can still learn from today.

The narrative also emerged, largely exemplified by this story, that this was part of Gibson’s comeback in Hollywood after a decade of being on the sidelines after his unfortunate anti-Semitic rant that went viral in the news. He’s starred in a couple well-received movies recently as well, but this is his big welcome back, it seems.

Garfield made some of the late night and other talk show rounds to talk about the movie, working with Gibson and more.

It’s hard to get a sense of the scale of the actual movie from the campaign. This seems like a big release and an important movie. But there’s only one trailer, a mismatched TV campaign and a press push that was kind of light for what seems like it should be an awards contender. It just seems like there should have been more. And there certainly should have been something on the official site that offered a bit more background on Doss, considering his story is so important.

The movie itself is a bit of a mixed bag. It seems on some level, even taking out the bifurcated TV campaign, to be caught between selling it as a war movie and an emotional story of a pacifist. While it may have elements of both in it, there are distinct parts of the campaign that sell the movie in different ways. That may lead to some marketplace confusion or at least make the audience, when paired with the continued public perception of Gibson, question whether or not it’s worth their money and time.