Movie Marketing Madness: Keeping Up With the Joneses 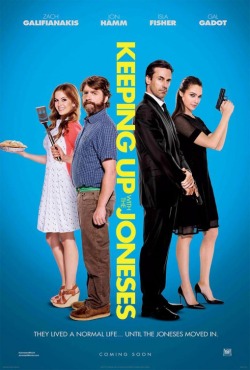 Jeff and Karen Gaffney (Zach Galifianakis and Isla Fisher) lead a normal, boring suburban life when we meet them in Keeping Up With the Joneses, the new comedy from director Greg Mottola. They have kids and are safely ensconced in their routine, with very few surprises or bumps in the road. That changes when a new couple, Tim and Natalie Jones (Jon Hamm and Gal Gadot) move in across the street and the couples strike up a friendship, but the Gaffneys feel like there’s something off about their new friends.

One day while poking around, they discover the Joneses are actually international spies. From there on out Jeff and Karen are mixed up in the espionage that’s part of Tim and Natalie’s everyday lives but not so much their own. That leads to all kinds of hilarity and hijinks as the boring suburban couple try to fit into the world of undercover spycraft, with the Joneses hoping no one gets killed and the Gaffneys just hoping they make it out alive.

It’s not a great poster. It’s a quad format, with Gadot and Hamm at the top and Galifianakis and Fisher at the bottom, each character holding the tools of their trade. So for the spies it’s compact pistols while the quiet married couple sports a novelty spatula and a cupcake, respectively. The spies are identified as having a “License to kill” (which I’m surprised isn’t trademarked) and the others having a “License to chill.” It’s…no, it’s not great. I guess there were no other ideas as to how to sell this comedy so the “faces and puns” approach was taken.

A second poster was just kind of boring, without much going on. It’s meant to play up the disparity between the two couples, with Jeff and Karen on one side holding a spatula and an apple pie, respectively, while Tim and Natalie on the other side are sporting handguns, the couples separated by the title. At the top are the names of the stars while at the bottom we get the copy “They lives a normal life…until the Joneses moved in.” So it’s showing that there’s some upset to the lives of the couple on the let, but we’re not sure by what. Basically it shows the broadest possible setup of the story without giving anything in the way of specifics. It’s just about showing off the stars and promising…something.

The first trailer starts off by introducing us to Karen and Jeff, a normal couple with normal jobs and a life that aren’t super-exciting. One day The Joneses move in across the street and are automatically captivating, largely because they’re super-stylish and capable. So X and X start spying on them and following them around, soon discovering that the Joneses are indeed spies of some sort and they get caught up in their escapades.

It’s pretty funny but also kind of a mixed bag. This may be a case where the comedy of the movie just doesn’t translate fully into trailers since everyone involved is really funny but this is not all that solid. Funny, just not as much as it should be.

The official website is pretty much your standard affair for a Fox release. A big version of the smiling faces of the leads greets you at the top of the page, which also has links to watch the trailer or follow the movie’s Facebook and/or Twitter profiles. Scroll down and there’s a big box encouraging you to buy tickets either directly or through the Atom Tickets app.

The “Trailer” is next and it’s just that, the one trailer. No other videos are on the site. That’s followed by an “About” section with a brief synopsis and a cast and crew list with no links or other information about the talent involved. The first quad one-sheet is in the “Poster” section and after that is a “Gallery” with just three stills.

The site finishes up with a “Social Gallery” that features a collection of updates from the movie’s Twitter profile and a prompt to sign up for the Fox email newsletter.

TV spots like this one started running a bit before release that played up the dichotomy between the two couples, showing the normal suburban couple and the super spies and the way their lives become mixed up. The focus here is on Karen, Fisher’s character, and her coming out of her sheltered shell to mix it up a bit.

There were also plenty of social ads run on Twitter and Facebook that used clips, some of which were pulled from the trailer and som new to the paid push, to generate awareness and interest.

There was a really good interview with both Galifianakis and Hamm where the two talked about how they’ve known each other for almost 20 years, going back to the L.A. comedy scene of the late 90s, how they both try to stretch to characters outside their comfort zone and much more. 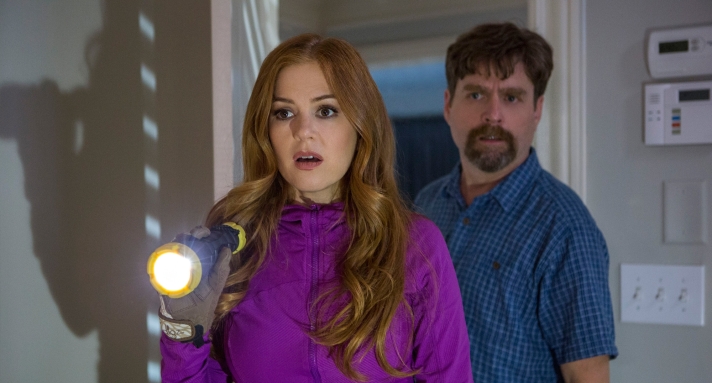 Director Greg Mottola and the cast talked about the fun they had shooting the movie, how they approached shooting in the suburbs and other topics at the movie’s premiere.

I’m not even sure what the campaign is trying to sell. Sure it’s a comedy but it’s not being sold as a particularly funny comedy, which is surprising given the talent involved. At best the movie looks mildly amusing, which isn’t exactly a strong call to action to give the audience. Overall it looks like the kind of thing that would make for a funny “SNL” skit but which might not be sustainable over the length of a feature.

What surprises me the most is that the campaign puts Galifianakis in the spotlight along with Fisher while Hamm, who’s proven himself to be a formidable comedic talent over the years, is put in the background along with Gadot, who’s pretty hot right now after stealing the last half of Batman v Superman and more. That might have made a lot of sense a few months ago, but now it seems like putting the chips on the wrong square. It might be fine, but the campaign never really comes together.

One thought on “Movie Marketing Madness: Keeping Up With the Joneses”