I was walking around the home improvement super center – it doesn’t matter which one, they’re all roughly similar in form and function – half thinking about the reason I was there, half about all the projects that would be coming up in the near future. As I contemplated the current status of my life as measured in household projects I saw yardsticks being sold for $.98.

That’s not remarkable. Everything else in the store was for sale for one price or another based on all the usual reasons relating to supply, demand, materials and so on. But there seemed to me something off about that particular item being sold.

When I was younger I would go with my dad down to the corner hardware store. This isn’t my using a rhetorical flourish or paean to a bygone age: It was actually a corner hardware store, situated a little under a half-mile from my childhood home. He and I would go there often, either walking down the Illinois Prairie Path that was right outside our door and which passed by the store or via car if he needed something more substantive. If I was sent on my own I might ride my bike down the Prairie Path as well. It was a small True Value franchise owned by a guy my dad had gone to high school with. 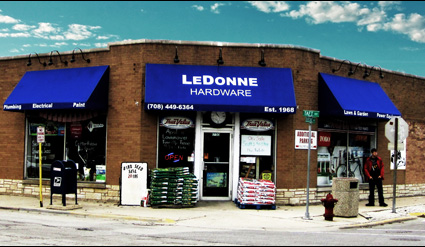 (Brief Tangent: When I was at Illinois State University years later I would wind up in a Creative Writing class I didn’t take nearly seriously enough with the daughter of the shop owner. But that’s unrelated to this story.)

The store was only big enough for about four short aisles of merchandise and a small section off to the side with lawn and garden equipment. It was a far cry from the big-box stores that would come along in the early-90s. You could only fit about two dozen people in there before space became an issue and if you couldn’t find something, someone who worked there was easily within the sound of your voice.

Off to the side of the cash register that was at the back of the store was a plastic bucket of yardsticks that bore the name and phone number of the hardware store – Le Donne True Value in Berkeley, IL – along with the True Value logo. They were free. You couldn’t take 12 at a time, no, but if you needed a yardstick you could grab one and take it home. They were a loss leader, an easy way to have something with the store’s branding in your home to remind you the store was around. No one needs a yardstick more than a couple times a year, so to sell them made little sense. Giving them away as promotional items was the better strategy because they were cheap and had more value as brand reenforcement than as revenue drivers.

Sometimes not everything needs to be for sale. But the kind of mindset that says “Eh, yardsticks are just to be given away to help customers and share our branding” is unique to a world of corner hardware stores where the same guy has owned the store for decades and knows everyone by name, not the world of big-box retailers that dominate markets and don’t have to do that because the consumer has little shopping choice.