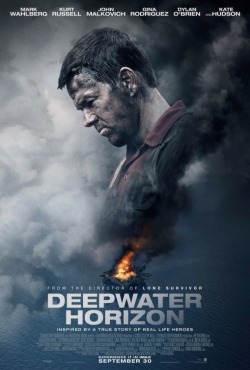 The last 40 years have seen an untold number of man-made ecological disasters of all sizes and impacts. One of the biggest of the last several years is when an oil rig in the Gulf of Mexico suffered a major disaster and spilled billions of gallons of oil into the sea, a story that’s now been dramatized in Deepwater Horizon. Set on the eponymous rig, the movie stars Mark Wahlberg as Mike Williams, a worker on the rig when it explodes and who, by virtue of him having a wife (played by Kate Hudson) and young daughter at home that he’s trying to get back to, provides the emotional core of the story.

Also on the rig during the tragedy are Jimmy Harrell (Kurt Russell) and others who will fight to contain the damage and save the people who are on the rig as it descends into flames and disaster. The movie comes from director Peter Berg, who has built a reputation in the last decade or so as a solid, dependable filmmaker who turns out movies that might not be hugely inventive but which always have a strong emotional appeal and relatable characters.

The first poster is mostly concerned with establishing the setting. So using an image that’s largely familiar to many in the audience we see an oil rig in the middle of the ocean that’s on fire, which is sending up a huge plume of black smoke. Just above the title is the copy “When faced with our darkest hour, hope is not a tactic,” something that makes sure the audience knows it’s going to get a very personal story, not just a recounting of the facts of this disaster. While he’s not name-dropped, Berg is referenced below the title with “From the director of Lone Survivor,” which was a surprise hit recently.

A series of character posters showing the actors in stark black-and-white with oil dripping off their faces were released next up, hammering home the point that this movie is about a group of characters trying to get out of some sort of industrial accident with only their will to survive to help them.

Two more posters tried to establish the setting for the movie. One just showed the oil rig on fire and falling into the sea, the other pulls the camera farther back a bit so it’s shot from above and we see Wahlberg’s torso and dirt-covered face as he looks down at the burning rig like some sort of higher being, the smoke from the fire blending into his upper body. Both are alright and are sure to make an impression when people walk by them in the movie theater lobby but there’s nothing overly unique about the design and the latter gets a little silly in the way it positions Wahlberg. But they establish for the audience what the story is, with the second one providing the promise that yes, we’re watching it from that guy’s point of view.

Four more posters came out that appeared to be specifically for the IMAX release. They all featured the basic image of looking at a cross-section of the earth, with the rig at the top and a long line going down to the field of oil being drilled into. One is much more understated than the other, which is more dramatic and artistic. These are probably the best of the batch because they try to convey something about the story and its setting, not content to just use a close-up of the cast’s faces.

The first trailer is filled with every single cliche of this genre of movie. We start out with Williams at the breakfast table with his precocious daughter, who’s doing a report on his job, and his beautiful adoring wife, who’s happy to rub her foot on his leg in a very sexy way. This scene is interspersed with shots from the rig itself, where strange noises and ominous readings portend something bad that’s about to happen. As the daughter’s explanation of his job continues we see her narration match the looming danger on the rig, culminating in a massive explosion that sets the whole thing on fire.

It’s just…not great. I feel like we’ve seen this movie countless times before and there’s nothing here to present anything new. It asks us to care about Williams based on his connection with his family, but it’s all so generalized that I just can’t.

The second trailer starts out with more shots of domestic bliss before Williams gets on the oil rig and we get casual introductions to the crew intercut with scenes of the machinery working as it should. Soon alarms start ringing and things start flying all over as explosions rip through the rig. Lots of shots of fire going through hallways and such along with lots of dialogue about how no, they’re all making it through this.

I still don’t care for the mover emotional way the studio is selling the movie, but I get why they’re doing it. A moving story about a father trying to save his crew and get back to his loving wife and daughter is easier to sell than one about emergency systems being enacted after mechanical failure.

The official website takes a while to load (at least on a Chromebook) and features full-screen video and music from the score. There’s a bit of text the briefly explains the plot on the front page and in the upper corner is a call-to-action to text a number to donate to victims of the recent flooding in Louisiana, which is a nice touch considering that’s largely the same area that was impacted by this disaster years ago. That CTA rotates with quotes from early reviews of the movie. There are links in the bottom corner of the page to the movie’s Facebook, Twitter and Instagram profiles.

“Synopsis” is the first section of content on the site, but the actual synopsis that’s there isn’t all that great, providing the barest of overviews of the story while making sure to mention all the producers and production companies that were involved. The “Cast and Filmmakers” section gives you the names and pictures of the main cast and crew but there’s no links or extended bios for them. The images of the cast are the same ones that were used for some of the character posters mentioned above.

There are just five stills in the “Gallery” that can’t be downloaded. And “Videos” just has the two trailers. Other than the big “Buy Tickets” button at the top that’s about it for the web presence, unfortunately.

Not surprising for a movie of this scale there was a lot of TV advertising done, with spots like this one that highlighted both aspects of the story, the emotional journey of Mike as he tries to survive and get back to his family and the overall spectacle of the disaster that is affecting the rig.

Online and outdoor ads used several variations on the key art, both the main poster and the character one-sheets.

A batch of stills formed the first bit of real publicity for the movie outside of casting and a shit in directors that happened before filming started.

The movie was among those which debuted or otherwise screened at the 2016 Toronto International Film Festival.

While Wahlberg and Peter Berg did some Facebook Live videos here and there it doesn’t look like anyone did the TV talk show rounds, at least not before today.

Most of the focus of the press campaign was around the truth behind the movie, with the cast and crew presenting this not as exploitation of tragedy but as a way to celebrate the heroism of the everyday workers who saved their friends and have suffered stress in the intervening years. The movie was also called out for being something unusual these days: a big budget production that didn’t involve super heroes, wizards or other pre-existing IP.

The studio gave this a really nice campaign that’s consistent across most of the key elements of the push. Over and over again we’re shown shots of oil-soaked workers who are battling against heavy odds to try and make it out alive and save their coworkers. Themes of sacrifice and hard work are pervasive throughout the campaign, selling the movie almost like a Band of Brothers-type story of men who are out to not just trying to get out alive but make sure their friends do as well.

This was what might be referred to as a mid-sized campaign, even if the budget was substantial. It’s certainly bigger than something that’s a pure indie movie like last week’s Miss Stevens but it’s not as big as the marketing pushes for franchise entries. It seems to have decent word of mouth buzz going for it that, combined with the advertising that will generate awareness there’s a good chance it pulls in decent numbers this weekend, tapping into a desire to see feel-good stories on the big screen.