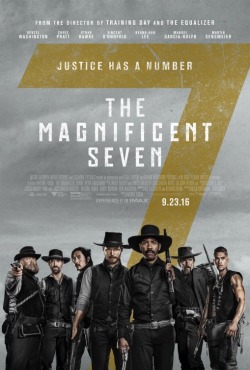 When Emma Cullen (Haley Bennett) sees her husband gunned down in front of her she sets out to get her share of revenge for the slaying. So she and the rest of her town that’s being terrorized turn to a bounty hunter named Chisolm (Denzel Washington) to break the grip of violence. That’s what sets the events of The Magnificent Seven, a remake of the classic Yule Brenner/Steve McQueen film, in motion.

One man against an army isn’t very good odds so he recruits his own gang of misfits and fighters. That starts with a mercenary gunman named Josh Faraday (Chris Pratt) and also includes a tracker, a sharpshooter and others who will bring their own unique skill sets to the fight. Together they’re out to not only get vengeance for the widow who hired them and save the town from a very bad man but also maybe find some redemption for themselves as well.

A sweet banner arrayed all seven of the main characters, arranged outward in order of importance with Washington as the center. It’s pretty great in showing off all the actors and the gritty look of the movie, with “Magnificent” spelled out behind them and “Justice has a number” at the bottom.

The next poster takes the visual cues of the character sheets – that grey background and the faded yellow typography – and collects all seven of the vigilantes, arraying them around in order of box office clout. “Justice has a number” we’re told, along with how this comes from the director of Training Day and The Equalizer, the two films obviously picked to highlight previous collaborations with Washington.

One more poster was released specifically to promote the IMAX release. It’s not too terribly different from the others but did feature a cool design, placing the title treatment and black-and-white shots of the cast walking toward the camera on an off-white background. Very washed-out and giving off a cool sense of this taking place on a vast landscape of nothingness.

The first trailer starts out by introducing us to the situation, which is that a woman wants to hire a band of gunfighters to protect her town from a gang of outlaws. He then goes about recruiting others, though the only one we really spend any time with is Pratt’s character. The entire rest of the trailer is just shot after shot of our heroes engaging in some plentiful violence in one way or the other.

It’s a good first look that, as I said, shows off the characters played by Washington and Pratt in particular since they’re the biggest names right now. It’s selling the movie as being heavy with explosive and violent action sequences, with shot after shot of machine guns being shot, arrows being fired and so on. It works pretty well and provides a decent first hook for the movie.

The second trailer mixes it up a bit, by first introducing us to Sam Chisolm and his quest to gather a team, starting with Pratt’s Farraday and including the rest of the team. They each get some shorthand information that explains to the audience who they are before we get more background on the widow who has hired them to exact revenge on the main who killed her husband. The rest of the trailer is about the action that ensues as they take on the army coming at them against all odds.

Again, it’s a solid trailer that sells the movie as an action-packed western that relies largely on the charm and charisma of the leads. Thankfully between Washington and Pratt there’s plenty of that to go around.

The trailer plays automatically when you load the movie’s official website. After you close that the seven main characters are presented on the screen and you can mouse-over them to see the names of the actors. Kind of surprised there’s no click-through information there and instead it’s just a glorified credits block. Up in the corner of the page there are links to the movie’s Facebook, Twitter and Instagram profiles.

“About” is the first section of content accessed via the menu at the top and gives you an alright overview of the story and the names of the actors involved. More info along those lines is in the “Cast & Crew” section, but again there’s no links or extended bios for the big names, just a simple list.

There are a number of stills in the “Gallery” that are available to download but they’re PNG files, which might be the first time I’ve seen that. The final section is “Videos,” which just has the same trailer that was at the opening of the site.

TV spots like this one took similar tones to the trailers. Some spent more time introducing the team, some spent more time focusing on the long odds facing the motley crew and the odds they’re up against. But they almost all set out the premise that they are going to be fighting the good fight and that there are explosions and wisecracks everyone will enjoy.

Online ads using variations on the key art have driven people to find out more information on the movie’s official website or to buy tickets now. And I’m sure the key art was used extensively in outdoor billboards and other ad units.

The studio sponsored a Twitch tournament of a shooting game with an event featuring appearances by Pratt and Manuel Garcia-Rulfo as well as movie footage during breaks in game play.

Buzz and conversation around the movie really kicked off when a trailer was shown and the cast made an appearance at a CinemaCon presentation for distributors. The press campaign then  got started with the release of a few official stills just before the first trailer.

The movie was among those which debuted or otherwise screened at the 2016 Toronto International Film Festival.

Pratt and Washington were obviously, as the biggest stars here, the focus of the publicity push. That included an interview about their favorite Westerns and other topics. The whole cast made various appearances in the media and at events that were part of the publicity tour. That included late night and early morning talk shows to talk things up.

While the movie was at Toronto Fuqua talked about the importance he placed on assembling a multi-cultural cast even though our images of the old west are almost exclusively white, at least when it comes to heroes. He also talked here about getting the various actors, especially Washington and Pratt, on board, the dangers of embarking on remakes and more.

It’s a very on-brand campaign, and that’s a good thing. In fact it might be the most consistently on-brand movie campaign of the summer, including Suicide Squad. Everything here is brown and yellow and looks like it’s been transported hundreds of miles across harsh landscapes in a leather bag, meaning there’s a worn and rough feel to the most all the print elements of the push. Combine that with how there’s dust flying in almost every shot of the trailers and the characters all look rough and ready for action and you can certainly see that while the action may be amped up, Fuqua and his team were going for a lived-in look for the movie.

As to the story…it’s pretty standard. We get the basic outline of the action but that’s about it. The campaign is much more interested in the dynamic between the seven…heroes? No, that’s not right, but neither is anti-heroes. These are hard men who have each taken on the offered job for their own reasons but who are committed to a cause that’s morally right, even if the means aren’t exactly righteous. So we’re being sold kind of a gritty western tale of revenge but mostly a story of seven strangers who are teaming up to do the right thing for the right reasons, quipping and shooting their way out of whatever situations they find themselves in.

One thought on “Movie Marketing Madness: The Magnificent Seven”