When The Weinstein Company and StudioCanal were trying to sell Macbeth, starring Michael Fassbender in the title role and Marion Cotillard as the infamous Lady Macbeth who sets him on a path to power and madness, I thought the marketing campaign leaned a bit heavily on playing up the Game of Thrones-esque drama of the story. The whole campaign seemed to want to sell it as a visceral experience of conniving and struggling over power on a huge scale. Some of that pays off in the movie itself, but not in a way that’s wholly in line with the campaign.

We all know the story: Macbeth is a war hero who benefits because of a combination of his battlefield prowess and the fact that the king has just executed a titled traitor. The king elevates him to the recently-vacated rank but is immediately on-edge because hey, he could be next. His wife plants the idea in his mind to kill the king since he’s now next in line to the throne but doing so begins a sequence of events that drives Macbeth to madness, spurs him to murder his best friend and more, largely because of the prophecy delivered to him on the battlefield by three strange and mysterious sisters. He’s finally undone by his own actions, which spur the exiled Malcolm and Madduff to return and bring vengeance and justice to the king who has wronged so many. 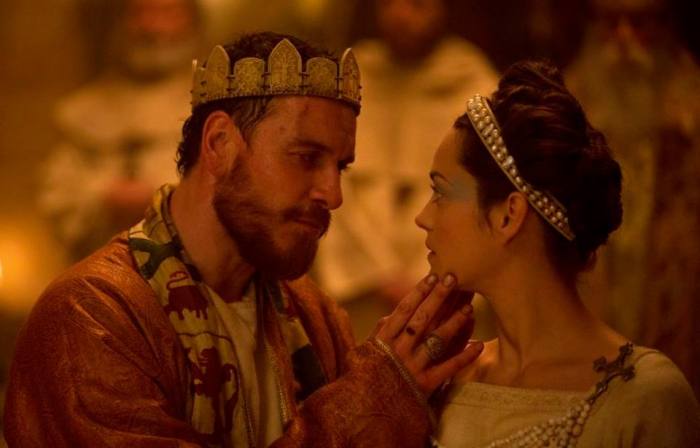 Fassbender acquits himself well as the mad king, letting his eyebrows and forehead do most of the work for him. It’s an easy role to overdo as Macbeth slides deeper and deeper into his obsessive madness but Fassbender never really lets it get the better of him. As expected he was a big part of the marketing campaign.

What struck me on viewing this adaptation of the story is just how important it is to find the right note with Lady Macbeth, though. It’s her that sets the story in motion and it’s her eyes, at least in this version, that much of the action is seen through. As her husband gets more and more out of control she’s the one who’s viewing it all and taking it in, dealing with the repercussions of her actions and working to keep the kingdom up and running while he spins his sword and engages in rash behavior.

Again, it’s hard to find the right note with Lady Macbeth since she’s often played as a conniving, power-hungry and remorseless figure. Cotillard, though, infuses her with tenderness and empathy, someone who might regret what the road she started down but who is determined to keep going out of a sense of pragmatism more than ego and vanity. It’s unfortunate she wasn’t a bigger part of the campaign, where she only makes a few fleeting appearances, since her performance is at times more gut-wrenching than Fassbender’s.

While the marketing played up the action sequences, they’re actually few and far between. Indeed the whole movie doesn’t have the visceral punch that the campaign was selling. This is still Shakespeare and the dialogue will always trump tacked-on battle scenes for emotion and drama no matter how filmmakers want to make them happen.

What was accurately portrayed in the marketing was the unique visual style of the movie, which are the best parts of those action sequences. The surreal red background of the final confrontation is a great backdrop that might make differentiating between actors sometimes difficult but does wonders to provide an emotional tone for the scene. And the rest of the movie features plenty of other examples where unique visuals add to the story in a way that’s singular to film as a medium.