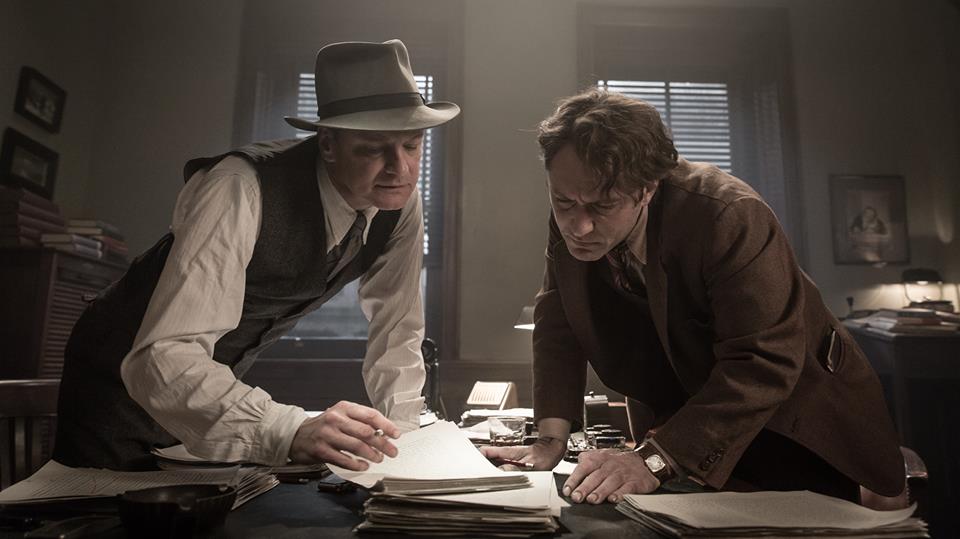 We tend to think of books as singular endeavors and achievements. TV shows and movies we understand are team products, requiring scores of writers, cinematographers, actors and others. But when it comes to books we usually – sometimes – think of just one person having been involved from beginning to end. That’s not true of course since not only is the writing process itself occasionally collaborative but there are plenty of other people involved, from those who initially helped to shepherd an idea in the writer’s mind along to the editor who helped focus the writer’s thinking and turned what may have started out as self-indulgent ramblings into something coherent.

That’s the story being told in Genius. Colin Firth plays Max Perkins, an editor at the prestigious publishing house Scribner in the early part of the 20th century. One day in walks a new author by the name of Thomas Wolfe (Jude Law) and Scribner agrees to publish a book he’s worked on. After that is a success work begins on a second book, but it’s a bit more unwieldy than anyone anticipated. So Wolfe and Perkins set out to turn a 5,000+ page manuscript into something tighter and more readable, a process that doesn’t always sit well with the temperamental Wolfe and certainly doesn’t sit well with the significant others in both their lives as the work spans not just long days but also years.

The first and only poster clearly establishes who the main characters are going to be as we see Firth and Law walking together through an old, based on the clothing and cars, New York City street. In the background is a building with “Charles Scribner’s Sons” on the outside wall. Firth carries a briefcase and Law a stack of papers, so we can infer some things about their roles based on that and the building in back. Below the title treatment is copy that explains the central conflict and that’s followed by a stripe of photos that show Firth, Kidman, Law and Linney.

The washed out palette of the poster is in line with what was shown in the trailer and adds to the atmosphere of what’s being sold. It’s not hugely visually striking but does get the general premise of the story across pretty well.

The first trailer starts off by introducing us quickly to Wolfe, who’s trying to get Perkins to publish his book, something he already intends to do. We then meet Wolfe’s patron and see he’s already working on a new book, a 5,000 page epic. The work of editing that book creates relationship issues for both Wolfe and Perkins with their significant others. Wolfe hates to kill his darlings but can’t stop his creative impulses. But ultimately it’s a story of friendship between the two men, at least that’s how it ends.

It’s not bad but looks like the kind of thing Miramax would release in 1995 to great acclaim. That feeling is compounded by the cast, most of whom made their bones in just that type of movie. The trailer gives most of the story here, including the relationship problems everyone will face and how all this ultimately plays out. Editing isn’t the most thrilling profession so they are clearly amping up those relationship storylines to sell a compelling time at the movies.

The movie’s official website is pretty basic and simple. It opens with the trailer that pops up over a version of the key art.

The “Trailer” is also the first section in the content menu. That’s followed by a “Synopsis” that offers a quick glimpse at the story while playing up the people involved both in front of and behind the camera.

That’s the focus also of “Cast & Crew,” which offers bios of the major players on both sides when you click their head shots. Finally, there are four stills in the “Gallery.”

The only social profile the movie seems to have is a Facebook page that wasn’t linked on the official site and only promoted at the end of the trailer, which is odd. That page has lots of engagement-seeking images, including motion graphics featuring scenes from the movie and more.

Nothing I’ve seen or am otherwise aware of.

Director Michael Grandame talked at the movie’s premiere about working with this cast and how he wanted to push Law’s performance into “dangerous” territory to make him appear as unstable as possible. 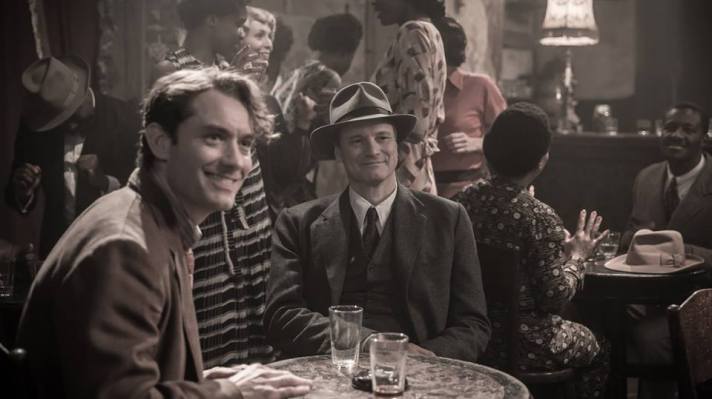 There was also this substantial story featuring an interview with the movie’s producer and the writer of the Perkins biography the movie is partly based on about the long journey it took to finally hitting theaters, the tragedy of Thomas Wolfe not being more widely regarded than he is these days and lots more.

Some of the cast, including Law, also did the talk show rounds just before release.

It’s not a knock on the movie, but the comments that were made when the trailer debuted are pretty accurate: This seems like an artifact from Miramax’s mid-90s release slate. That’s not a bad thing, though, since it speaks to a certain prestige and level of quality coming from the actors. But that’s the vibe that’s coming off the whole campaign, that it’s a deadly-serious self-important story that people who want to be seen as intelligent should be seeing.

More than that, the marketing sells the movie as kind of a bromance (I’m so sorry for using that word) between Perkins and Wolfe. The whole thing keeps the focus on the working and personal relationship between the two men, which thrives despite one stumbling block after another, always to the detriment of the relationships with the women in their lives. This campaign is telling you to come see a movie about a couple workaholics who can’t stop getting in their own way by putting work – presented here as the quest for high art – before everything else.