It’s hard to make the case the a movie based on a video game is going to be very good. While some are certainly better than others – a couple of the Resident Evil movies aren’t bad compared to Prince of Persia, Super Mario Bros. and others – there’s nothing here that screams high quality filmmaking. Even more so than the divide between novels and movies, the difference in the *type* of story that works in a video game compared to what works in movies seems too much to bridge. It’s not surprising as the former is designed to be interactive and controlled by the player and it’s understandably hard to translate that into a compelling passive experience.

Entering the fray to bring some spectacle to the genre is Warcraft. Coming from writer/director Duncan Jones, he of Moon and Source Code, two smaller, more personal stories, the movie is…well…it’s hard to explain so let’s just look at the official synopsis:

The peaceful realm of Azeroth stands on the brink of war as its civilization faces a fearsome race of invaders: Orc warriors fleeing their dying home to colonize another. As a portal opens to connect the two worlds, one army faces destruction and the other faces extinction. From opposing sides, two heroes are set on a collision course that will decide the fate of their family, their people and their home.

Ready? Let’s dive into the marketing.

A couple of initial posters set the conflict between the two sides of the movie, with one showing a human whose face is obscured by the massive sword, with blue paint on the half we can see, presumably some kind of war paint or tribal marker. The other shows an orc whose donning a huge animal pelt on his head, the teeth in the animal’s head counting the orc’s own massive teeth. Red paint is splattered on his face, again some sort of warpaint to help designate the sides in the battle. Those two faces were combined into a single one-sheet that divided the two of them with the sword. 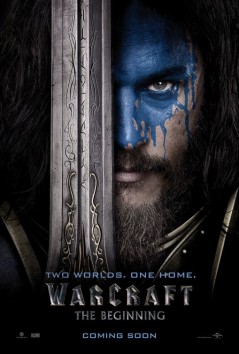 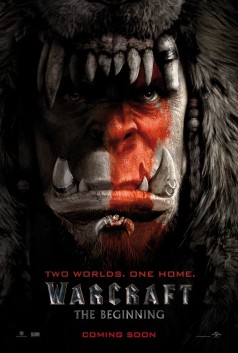 The theatrical one sheet takes the two faces from the first round of posters and puts the same image of them divided by the sword at the top of the design. Below them are the rest of the primarily human cast, who are all showing off their various assets, from a spell castor to another orc with his massive hammer. The scale of the conflict is on display at the bottom as we see a massive army gathered and marching into battle. So this one is very much trying to sell this to the Lord of the Rings fans who feel there’s a whole in their life that can be filled by another fantasy epic.

A whole series of character posters came next showing off all the humans and orcs. Surprisingly they don’t feature the names of the characters, so those of us who aren’t hip to such things don’t really get much new information. The ones showing orcs put them in their environment outside or amidst vast armies while all the humans are in some sort of citadel or castle. The other differentiating factor is in how the “Two worlds. One home.” copy is presented. For the orcs that’s in red lettering, for the humans blue. All these are just meant to reinforce the look and feel of the movie since there’s almost no new information that’s here for anyone who’s not already a fan. 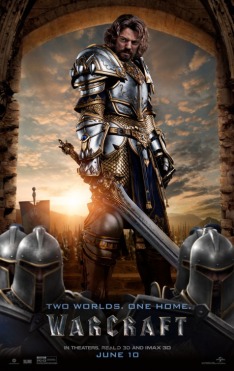 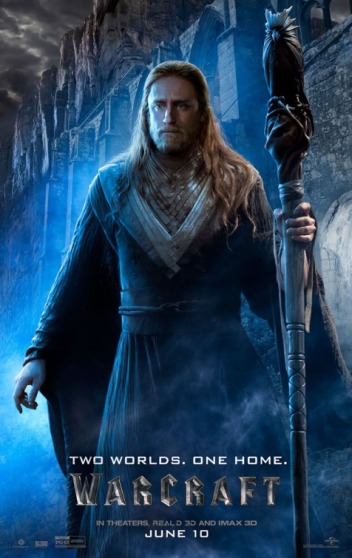 Another set of character posters showed and named the human actors who brought the motion-capture orcs and other beasts to life.

The first trailer was teased with the release of a 15 second teaser that was basically just big, epic music over a collage of action sequences as character jumped, lunged, swung swords and more.

The actual trailer opens with narration about how the world has been at peace, but that’s about to end. That leads to a group of orcs attacking humans. But then we see that the orcs are just struggling to survive as well. There’s one orc who understands that the best chance for that is by everyone working together, something that leads him into conflict with his own kind. Eventually he and his human ally (not character names are ever used) unite as all sides around them conspire to forward their own selfish agendas.

It’s a decent trailer that certainly shows lots of action. If the big-scale action sequences were your favorite parts of the Lord of the Rings movies then this is going to be right up your alley. But this isn’t really going to attract anyone who isn’t into this sort of movie already. Everyone is shown as a one-dimensional character and the story is paper-thin based on this trailer. It was a hit on social media, though, with reports that it trended much more strongly than other recent trailers for video game adaptations.

The next trailer starts off talking about the peace the world has enjoyed, peace that may be coming to an end if the warring people don’t unite against their common enemy. We get slightly better looks at some of the powers of the various characters but that’s about it.

It’s largely the same – or at least similar – footage we’ve seen before, all trying to make it look as video game-like as possible.

The official site opens with a motion graphic in the middle of the page, the insignias of both sides in the battle on either side of the middle section that has all the content.

Let’s take a minute and talk about that design. It’s a responsive site and I imagine if you viewed it on a phone or other mobile device you’d lose the banners on the sides and just see the middle section content, which is vertically-aligned like it’s meant to be viewed on a mobile device screen. It’s basically a vertical layout with some extra art on the side. That’s quite interesting and an approach I’ve not seen before on a movie website. It speaks to the mobile-first audience that’s being targeted here.

On to the content. As you scroll down the center section you get lots of motion graphics ranging from a variation on the key art to character images that explains who some of these folks in the story are. There’s also a section that lets you look around Stormwind City from the perspective of a massive eagle that’s flying through the sky.

At the top of the site there’s a menu that starts, not counting the “Get Tickets” prompt, with “Trailer,” a section that actually has all the trailers and a couple of TV Spots. “About” has the same synopsis I pasted above along with some other details on the producers and filmmakers involved.

There are about 24 stills, including a couple of behind-the-scenes shots, in the “Gallery.” “Partners” has the companies that have helped with some sort of cross-promotion for the movie. Finally, “Share” is a prompt to send a Tweet, Facebook or Google+ post with a prewritten message and a link to the official site.

TV spots for the movie like this one generally played like short versions of the trailer, providing some details about the conflict that’s been brewing between humans and orcs and hinting that there are a couple characters who want to change that.

Then there were spots like this that featured 1) No dialogue, which may say something in and of itself and 2) At least a couple shots that are from the first-person perspective of the character, a seeming homage to the movie’s video game roots.

The studio ran paid ads on Twitter that included trailers and other video. It also created a prequel comic that told the story leading up to where the movie begins.

Promotional partners, based on those listed on the official site, included:

Unfortunately some of the first press – outside of first looks at a couple of the creatures in the movie – came when comments were made calling the film a “problem movie,” (THR, 9/16/15) with all sorts of potential implications to that vagueness. Jones took to Twitter to refute those rumors, calling out the fact that Universal had plugged the movie in the same spot that in 2015 was given to Jurassic World. So the studio is hardly burying the film in a garbage slot.

Shortly after the kick-off of the marketing, Jones went to the press to make the case that the movie wasn’t just for the hardcore game fans. That was likely a necessity since, as I stated above, the trailers and such were very much designed to appeal to just that audience. To his credit he did admit that those gamers *were* the core audience for the movie and that he and studio had their work ahead of them to make it seem attractive not only to them but to the mass audience needed to make it a hit.

In a nice bit of upbeat press Robert Kazinsky, who plays the lead Orc in the film, said while on “Conan” that he credited World of Warcraft with saving his life, providing a refuge from some unpleasantness he was facing his personal and professional life a while ago. So there’s a nice connection there.

Jones obviously made the press rounds, talking, as in interviews like this one with The New York Times, about not just the movie but the personal events that framed the process, from his marriage at the beginning of shooting to his father, David Bowie’s, death near completion. He also went into the process of getting the movie made, including how he was disappointed with the first script that was around when he got involved and how he rejiggered the story to make it closer to one he felt was true to the Warcraft brand.

As I said earlier, there’s an obvious portion of the campaign that’s designed specifically to the audience that’s feeling a Lord of the Rings-shaped hole in their moviegoing lives right now. So it’s being sold as a big fantasy-driven spectacle with lots of creatures, wizards, sword fights and more. But it’s notable, at least to me, how much of the campaign seems to be just not trying to screw things up and so features no dialogue and just lots of action. That’s what the studio obviously thinks is going to bring in the ticket buyers but that might a miscalculation.

The other thing that sticks out at me is that the campaign kind of can’t decide who it’s selling the movie to. There are obviously lots of moments here that are just for fans of the game but that leaves out a significant portion of the movie-going public. So the fact that character posters don’t feature names seems very insidery and not open to non-players at all. But then the trailers assume there’s no knowledge and just try to position the movie as a big spectacle for anyone. You can make the case that this is the studio trying to sell the movie to all audiences but it actually comes off as kind of disjointed, at least from the perspective of someone who hasn’t played the game and doesn’t know the characters. We’ll have to see how it resonates with the audience in general.