Chicago, as the saying goes, is a city of neighborhoods. From Beverly to Lincoln Park, Austin to the Near North Side and everywhere inbetween, these are the result of ethnic groupings, a little political gerrymandering and other factors. People live in Chicago in name only, with many residents identifying more with their specific neighborhoods than the city as a whole. It’s like a group of small towns that banded together out of necessity against a common enemy, with local alderman and their clout making more of an impact than City Hall. Local institutions and figures are the focal points of many of these.

Last year’s Chi-raq was a dramatic, if sometimes fantastical, look at one such neighborhood and now Barbershop: The Next Cut is here with a somewhat more light-hearted look at another one. The movie, the third in the series, comes 12 years after the last installment and picks up the story of Calvin (Ice Cube), the proprietor of Calvin’s Barbershop, a local shop that serves as neighborhood gathering place. In order to stick around Calvin’s is now sharing a space with a women’s hairstyling parlor. More than that, the surrounding area has taken a turn for the worse and so Calvin and the rest of the gang find themselves fighting for the very soul of their neighborhood as well as the survival of their business.

The first poster shows the whole cast inside the barbershop. Cedric the Entertainer and Nicki Minaj are seated in chairs while Ice Cube stands between and slightly in front of them, the rest of the cast relegated to standing in the background. It’s not a super-exciting poster, but it doesn’t need to be, it just needs to tell people the movie is coming out.

A whole series of character posters came next that showed off the employees of both shops and their patrons. There’s nothing much to them visually, it’s just about giving each member of the cast a big shout-out with their name and photo Photoshopped into the barbershop background. 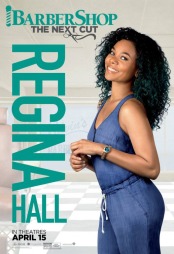 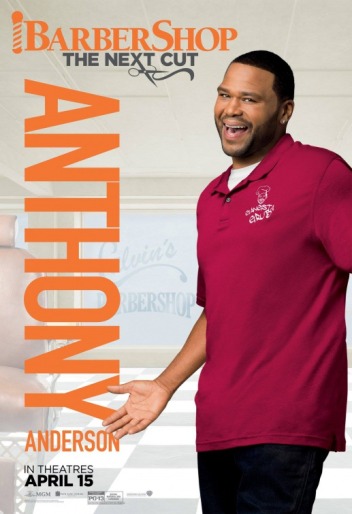 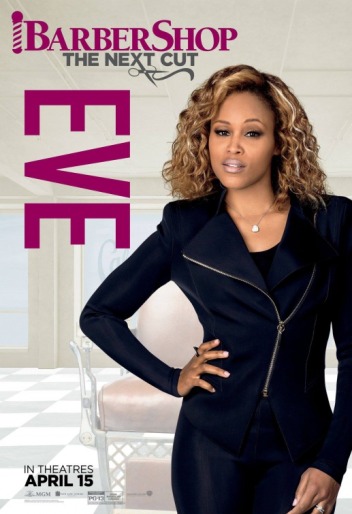 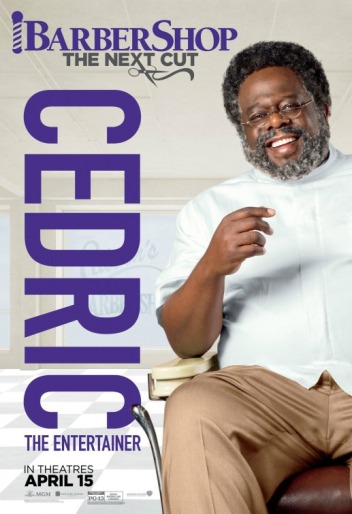 The first trailer is quite good and pretty funny. We’re reintroduced to the crew of the barbershop, particularly Cube’s character, who talks over and over again about how much he loves his Chicago neighborhood. We see that the status quo has changed a bit, with his shop having merged with a women’s salon that was also struggling. That means the clientele has changed as well, with the shop no longer being a men-only refuge. The second half of the trailer is less about the shops and more about the difficulty of not only living in a neighborhood that’s subject to random shootings and other violence but also raising kids in that environment.

I’m actually a big fan of the tonal shift in the trailer as it shows that the movie will be funny but also try and address a serious topic, maybe in a less heavy-handed way than some other recent notable releases. It’s a great cast – even Nicki Minaj looks like she’s well-used in the movie – and looks like a solid entry in the series.

The second trailer starts off by establishing the barbershop as the community gathering spot in a neighborhood that has plenty of challenges. After some joking around to show the relationships of the characters and the dynamics in the shop we see that they decide to affect some change by making the shop into a safe space to try and turn things around.

It’s pretty funny for many of the same reasons the first one is. Basically if you enjoy some trash-talking coupled with a social message of being responsible members of your community, this is for you.

The official website opens with the second trailer, which is certainly worth rewatching. When you close that you’re taken to the Tumblr-based site and a version of the key art featuring most of the main cast. There’s a menu there so let’s look at that first.

“Story” takes you to About the Film (okay….) which is where you can read a decent synopsis of the story and find out about the talent on both sides of the camera. “Partners” has the names and logos of the companies who are helping to promote the movie in some way. “Get Tickets” is pretty self-explanatory.

Going back to the site you can scroll down and get lots of videos like a short featurette with the cast talking about why they came back to the franchise along with other videos, plenty of GIFs that counted down to release and more.

The Facebook page, Twitter profile and Instagram feed for the movie are all full of promotion updates like videos, GIFs and more. Twitter, of course, has lots of RTs both of movie talent and of fans who are talking about how much they love the talent and what they’re doing to promote the movie.

It’s hard to believe there wasn’t any TV advertising done but there’s nothing on the site or YouTube that I could find along these lines. I did see a handful of Promoted Tweets on Twitter that shared the trailer and contained a call to action to see it in theaters.

In terms of promotional partners there were a few:

Minaj was understandably a big part of the publicity, talking in interviews like this about what she wanted to do with her character and more in the context of her overall career. Lamore Morris also got a nice profile in connection with the movie that also touched on his role on “New Girl.” And the whole cast talked about the movie at the premiere.

Cube, though, was still the focal point. He appeared on “Good Morning America” and other talk shows to talk about the movie and returning to the franchise. He also joined other cast and crew in other press visits to keep the drumbeat going. And there was an attempt at getting plenty of local coverage with a bus tour of the country that brought a mobile barbershop to major markets, Ice Cube and other members of the cast along with it.

I like this campaign quite a bit. It’s all on-brand and knows what it is that it’s selling, which is a charming, funny movie that also has an important message to say. I’m a sucker for movies that involve heavy amounts of characters just trash-talking with each other so this campaign is right up my alley in that regard. Even more than that though I like the tight sense of rhythm the campaign has as it balances humor very real human drama.

More importantly, the campaign seems to know what the movie is. It’s a charming low-key comedy with lots of vibrant characters that deals with some of the issues facing inner-city neighborhoods in 2016. That’s no small order but Cube and the rest of the cast look like they pull it off nicely. The marketing all comes together to emphasize the story and the ensemble, both of which should provide attractive options for different segments of the audience and give them different, though no less powerful, reasons to go see it.