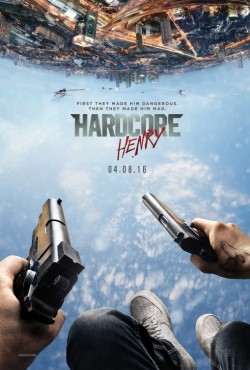 Movies – in fact all stories – have to take place from some perspective. That can be first-person, third-person omniscient or a variety of others. It’s how we experience the events unfolding in the story and how we find out what’s going on. The story is dependent on which point of view is chosen because that’s how the details are filtered to the audience. If we’re following a single person and only get her perspective then the story becomes very small and intimate, even if the events unfolding are huge. If there’s a narrator or some other third-party point of view the story becomes massive, even if we’re following just a few main characters.

Point of view is the core conceit of Hardcore Henry because it’s doing something truly interesting. The entire movie is presented from the point of view of the title character. He’s an amnesiac who has been resurrected with no idea who he is determined to find out his true identity. Not only that but he must rescue his wife and stop a madman from creating a legion of soldiers like him. The only person who can help him is Jimmy (Sharlto Copley), whose motivations can’t completely be trusted but who is the only one providing any assistance.

The first poster pretty much sets the movie up as a video game. We see from the lead’s point of view as he falls through the sky down toward a city, guns drawn and ready for action. There’s some sort of ariel battle happening above the city. It conveys the movie’s perspective pretty well and sets up some sort of adventure, especially when you look at the tagline, which says “First they made him dangerous. Then they made him mad.” That helps sell the movie as coming from the point of view of a lone vigilante or other character who is out to enact an agenda of his own.

When the first trailer opens we see Henry waking up a surgery, something that we find has been facilitated by his wife, who explains to him that he now has enhanced powers. Soon a group of paramilitary types break in trying to steal him and his technology. The two escape but she’s taken captive by the group that’s after him. So he, with the help of Jimmy, goes after them as he tries to rescue her. The rest of the trailer is just about showing as much of the first-person action as possible, most of which is awesome.

It’s…well, your enjoyment of the trailer is going to depend on whether you’re the kind of person who likes watching other people play video games, which is why debuting it on Twitch.tv made a ton of sense in retrospect. It absolutely plays like a first-person shooter game, including how all the exposition from Jimmy and others come off like game cutscenes. If you like super-violent action revenge movies, this will likely be up your alley and, at the very least, the trailer presents an interesting filmmaking experiment and audience experience.

The second trailer skips much of the setup and instead throws the audience immediately into the first-person action as the protagonist repels down the outside of building, kicks and punches numerous bad guys and more. The closest this one comes to explaining anything about the story is when someone says to him “Let’s go get your wife!”

The movie’s official website opens up with a version of the key art that features a few quotes from sites that have provided early reviews of the movie based on festival screenings. There are big buttons toward the bottom that encourage you to either Get Tickets or Watch the Trailer.

“Get Tickets” is also the first section of actual site content, with links to ticket providers and the ability to see where the movie is playing in your area.

Scrolling down, “About the Film” has a good synopsis of the story and a small and simple cast and crew list. That’s followed by “Join the Conversation,” which mocks up various Tweets people have shared about the movie and more. Basically this is a way to include more critical quotes but in a way that presents them as status or photo network updates. You can find more by clicking the Enter Now button, which takes you to a whole “Buzz” section that has a curated gallery of additional Tweets and other updates that you can filter by network to see who’s saying what where. 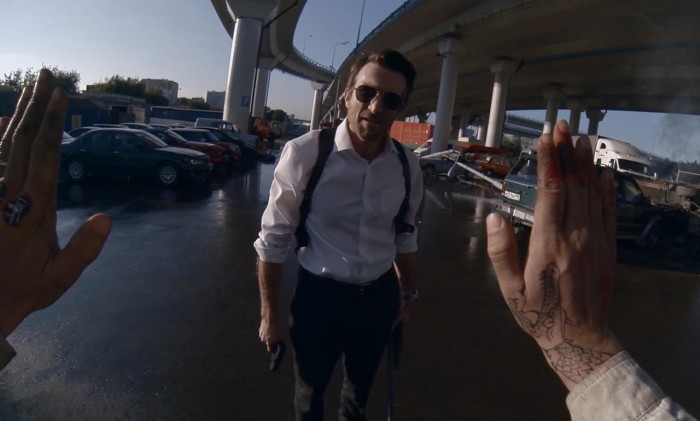 Fathom Events is holding a special event the night before the movie opens that includes the ability to see the movie, get an exclusive comic and experience – or have your questions asked at – a Q&A with Copley and writer/director Ilya Naishuller. Information on that and how to get tickets can be found in the “Fathom Event” section.

“Videos” has both trailers and a bunch of TV spots and clips. There are quite a few stills from the movie as well as a couple behind-the-scenes shots – in the “Gallery.” And you can get more information on the afore-mentioned comic “Hardcore Akan,” which is a prequel story focusing on the early story of the movie’s villain, in the “Comic Book” section. Finally “Soundtrack” lets you preview and buy the movie’s soundtrack album.

There were quite a few TV spots created and run. None of them were too different from the other, mostly varying here and there just on what specific footage was used. But they all sell the movie’s main conceit, it’s first-person point of view, and focus on it being a non-stop ride of running, jumping, throwing grenades, getting weapons upgrades from Copley’s mysterious character and lots more craziness.

The movie got a significant ad campaign on YouTube, with 30-second spots that were similar to the TV commercials being run as pre-roll.

In an integration that makes a ton of sense considering the movie’s point of view, it got worked into the game Payday 2 courtesy of studio Starbreeze, allowing players to take on the role of Jimmy, Sharlto Copley’s character. Copley also brought back Jimmy in a fun PSA for the Alamo Drafthouse that involves a very violent reaction to someone texting in a theater.

The movie received generally positive reviews from its debut at the 2015 Toronto Film Festival. And a lot of press was garnered when it was announced the trailer would debut, in an interesting move, on the Twitch.tv service that’s primarily known as a site for streaming video game play. Later on it had a very positively-received screening at SXSW 2016.

The story’s origin and the genesis of the unique take on the shooting of the movie was of course the focal point of press coverage, including stories like this that interviewed Naishuller, who talked about shooting in Moscow using almost nothing by GoPro cameras. 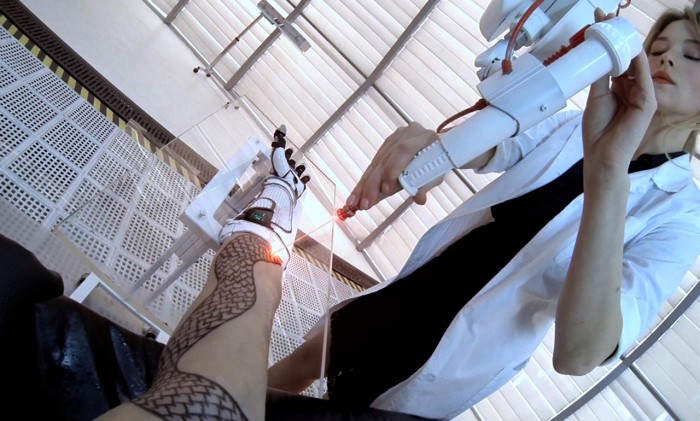 Copley, as the movie’s only real recognizable star and one of the few faces, made the press rounds a bit to talk about filming the movie, how he got involved, what the challenges of production were and lots more.

The campaign certainly knows what it’s selling and keeps hitting the same beats consistently. Everything focuses on the wild and crazy nature of the movie and how endlessly kinetic it is as Henry jumps out of helicopters, runs on the roofs of moving trucks and more. As mentioned above, it’s constantly being sold as one long cut scene from a first-person shooter video game, which is alright and appropriate, since that’s the audience that’s going to be most interested in the movie.

In terms of the movie itself, it…well, that’s what it looks like. Most action movies split their focus between the action sequences and the downtime of the characters as they have an emotional moment between spurts of trying to save the building, rescue their family or whatever the motivating story is. The campaign for Hardcore Henry, though, sells the movie as having almost none of that as it moves from one incredible moment after another in a non-stop ride of first-person action.