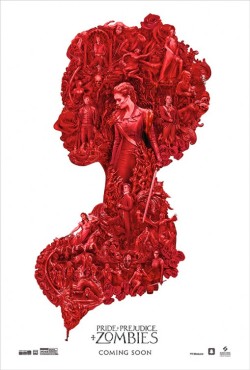 People like to think the current mashup culture is a relatively new phenomenon that can maybe be traced back to rap and hip-hop in the 80’s but that’s about as far back as it goes. This overlooks centuries art, though. Differing arrangements of classical pieces are part of it. If you need any concrete proof, look no further than Miles Davis’ “Sketches of Spain” record, where the trumpeter applies jazz motifs and style to arrangements of early 20th-century Spanish folk music into something that’s both reverential of the past and wholly original.

The last few years have seen a number of literary and movie genre mashups as well. The latest, opening this week, is Pride + Prejudice + Zombies. Based on the 2009 novel of the same name it’s exactly what it sounds like: The characters from Jane Austen’s novel are placed in a zombie apocalypse. Lily James plays Elizabeth Bennett in a world where a plague has turned much of the population into the undead. A fierce and masterful fighter, Elizabeth must protect her family as well as work with Mr. Darcy (Sam Riley) to try and destroy the zombie menace before it gets any worse.

The first poster sets up the cross-genre setting of the movie pretty effectively. It’s a portrait of a lovely Victorian-era young lady but most of her face is melting off, establishing that we’re dealing with a situation that’s not quite right here.

The next poster is…pretty great. It shows Elizabeth and Bingley standing atop a pile of zombies literally crawling out of the ground toward them, both of them with blood-stained swords, though his is raised and hers is not. The dark, ominous background behind them lends a nice sense of atmosphere to what’s obviously a tense, dramatic scene. I’d take small issue with how the poster shows him as being ready for battle where she’s not, but I may be reading more into this than there is. 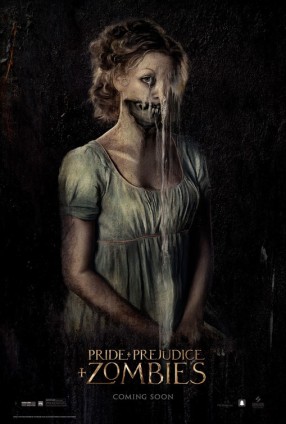 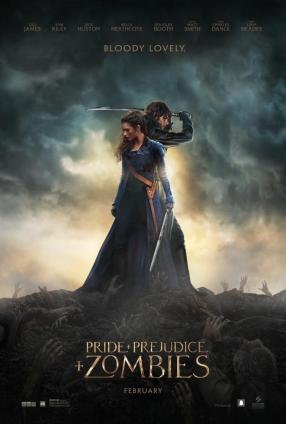 The final poster is probably the best because it’s he most artistic. The outline is of a woman’s silhouette against a white background, but that silhouette is red and crawling with bodies and characters and grotesque scenes. It’s fantastic and makes a big impression on the audience.

All of these posters go for striking visuals as a way to sell the movie, going for selling the movie to the horror genre audience more than anything. Some work better than others but they all add up to a poster campaign that is meant to appeal to people who are more inclined to the “zombies” part of the title.

The first trailer looks like your standard-issue period drama for the first 30 seconds. Pictures of luscious estates, fancy balls and such accompanied by voiceovers about how a proper young lady of the time is supposed to act in society. Then we see our first zombie and what follows is the lead and her friends going all Buffy on a variety of undead, slashing one after another and otherwise taking them out with extreme prejudice.

The trailer gives off a fun attitude, like the film doesn’t take itself seriously at all and instead is totally aware of the ridiculous premise it’s asking the audience to accept. There’s not much here about the story or who the characters are, but who cares about that when you have a Victorian young lady of some stature and means hacking zombies, right?

Shortly after that a full trailer was released that provided a lot more details. We open on an innocent game being played when there’s a scream and we see our first zombie. Then we hear that this all started during the Black Plague and that the human race now lives in a constant state of battle against the zombie hordes. We get some dialogue about being asked to choose between the fight and love, but from there on out it’s mostly just the battle against the zombies, most of which looks pretty cool.

This is a great trailer that shows off the humor and plot of the movie’s story clearly. If you’re not hooked after seeing this then you’re just not going to see the movie.

The official website is nothing special but it’s pretty standard for these kind of sites lately. There’s just the poster and the trailer along with a cast and crew list. There are links to the movie’s Facebook page as well as a prompt to follow the account on Snapchat. There were also profiles for the movie on Twitter and Instagram. And…that’s about it.

There were a few TV spots like this one that were run that basically play like mini-trailers. They play up the explosions and the zombie-killing violence pretty heavily in an effort to make a big impression on the audience in a limited amount of time.

I saw a few online ads, including video ads, run as well. And I’m sure there was outdoor advertising done in select markets.

Considering the circumstances of the story, it shouldn’t be surprising that Hot Topic signed on as a promotional partner, offering a line of movie-inspired items – mostly lingerie – for sale.

A couple months before release there was a feature in Marie Claire that included different covers featuring three of the cast. The director would talk occasionally to the press about the difficulty in bringing the story to the screen. The rest of the cast made the press rounds as well.

The cast talked at the film’s premiere about how ridiculous the premise is but how fun the execution of that premise is. Later on a world record was set when the studio gathered a group of zombie cosplayers to all read Jane Austin at the same time.

It was an interesting campaign that certainly works to hit all the buttons to appeal to the target audience. It sells the movie as more of a horror film than a period drama, as I said before in a likely attempt to get the horror fans out there more interested in the film than they otherwise would be in a film set in Victorian London. But I’m just not sure how interested action horror fans are in something that presents such a unique take on the zombie mythos when what they really seem to want it just the lumbering undead stalking their would-be victims.

But my concern here is that they’re trying *too* hard. It plays well to setup the premise and all that but my guess – and this is only a guess – is that it might oversell the zombie aspect of the story when most of the running time is concerned with the characters and setting. So it’s a period drama that is about a world in which zombies are on the verge of overrunning society but the amount of zombie fighting might be minimal.