There are countless stories of classic Hollywood. From the time of original silent films through the studio era, the stars were bigger than life, the movies were epics that dominated the big screen and the stories were dramatic – or hilarious – as everyone sort of invented the machinery of movie making. Not only that, but all this was going on in a period of huge world events, from world wars to cold wars and more.

(I’m a big fan of the You Must Remember This podcast produced by Karina Longworth which, as she says in each episode, is dedicated to the hidden or forgotten history of Hollywood’s Golden Age. You should be listening.)

The new film Trumbo goes back to tell one such story. Dalton Trumbo (Bryan Cranston) was one of Hollywood’s top screenwriters into the 1940s. But he found he found himself out of work suddenly when he and others came under the glare of the House Un-American Activities Committee in 1947 when he was investigated for being a member of the Communist Party. Eventually, though, they found a way to keep writing by convincing producers to not put their names on the movies.

The movie’s first poster tells you a lot about the story. Cranston as Trumbo is front and center in the image, cigarette in one hand and a scotch in the other as he looks over his typewriter. So we immediately get a good sense of not only the character but also the setting for the movie. Behind him is a word cluster of things like “Genius” and “Radical” and more to give you an idea of the kinds of things he was called. At the top there’s the copy “Are you now or have you ever been…” which continues setting the scene since that’s a line pulled straight from the HUAC hearings. At the bottom we get the names and faces of the rest of the supporting cast.

The second poster was a “motion poster” that worked like a mini-trailer – the kind of thing that these days would debut on Instagram or Vine – than anything else. So two quick critic quotes quickly give way to vertical stripes that fly in and which feature each of the movie’s main players.

The one trailer for the movie starts off by introducing us to Dalton Trumbo and his place as a Hollywood screenwriter. But we quickly shift into the heart of the matter as we see him being investigated by the House Unamerican Activities Committee as he’s suspected of being a Communist. So we see him being denied work, with his business associates turning against him and more. But Trumbo is a clever guy and so turns the tables by agreeing to write anonymously, with his name never appearing on a script thanks to the help of a few close friends. That leads to Kirk Douglas paying Trumbo a visit to ask him to do work on Spartacus.

The trailer pops with a fun kind of vigor, buoyed mostly by Cranston’s performance. He has a twinkle in his eye through the whole thing. We also get a clear sense of the historical context of the story, which is good, as well as some looks at the supporting cast. It’s a solid trailer that zings along, presenting what could be stuffy history with a fun attitude while not diminishing the seriousness of the subject matter.

The official website is a sparse, but nicely done affair.

The first section of content is “Videos” and there you’ll find the trailer as well as some clips and a featurette. “Story” has an alright synopsis of the plot and cast list.

There are just three “Photos” and when you go down to the “Cast” section and click on those images you don’t get any information, just an enlarged version of the picture. 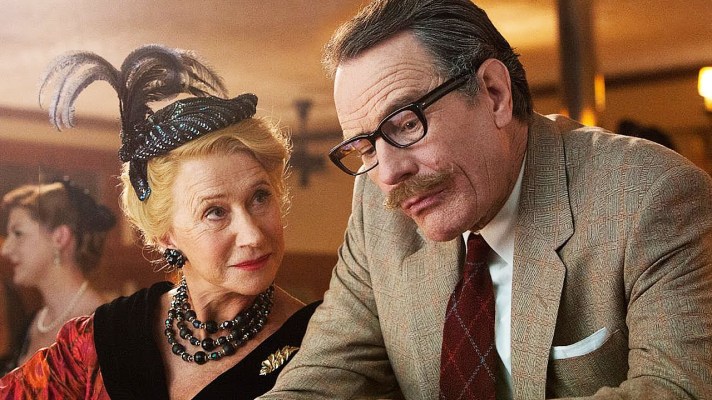 “About the Film” is probably my favorite section. There are areas here where you can view photos from the film’s premiere as well as profiles of the cast. But there’s also a good amount of material on Trumbo himself and other overviews of the era and characters of the film. There’s an excelling Trumbo Primer that shows you what movies he wrote as well as going into details about production, how he was able to do that while on the Blacklist and more. This is a great overview of relevant material that’s highly recommended.

The movie doesn’t have social profiles of its own so it’s borrowing space on the pages of Bleecker Street Media, the film’s production company.

Nothing I’m aware of online, but there were some TV spots run that played more or less like mini-trailers, showing the outlines of how Trumbo fell from the height of fame and celebrity in his profession to a Hollywood outcast.

Both Cranston and Mirren got nice profiles in The Hollywood Reporter (9/2/15) that allowed them to talk about their characters and what attracted them to the roles and so on. Of course the former also focused on the actor’s career post-”Breaking Bad,” which is going to be a dominant theme of all of Cranston’s interviews for some time to come. He would also later talk about his love of the era of Hollywood that’s portrayed in the movie and how those movies still inspire him.

There was also a bit of (seemingly pre-requisite) conversation about the movie’s awards chances (Variety, 9/12/15). And of course because Hollywood loves to talk about itself it afforded a chance to revisit The Blacklist itself and talk about facts people may or may not know (Variety, 9/12/15). Getting the cast and crew to talk about history would be a common theme of the publicity as we moved closer to release.

The history behind the movie continued to be a central theme of the publicity as the history of the Hollywood Blacklist was explored, including conversations with the daughters of Trumbo themselves, who talked about their father and their involvement with the making of the movie.

This is a nice tidy little campaign. There’s nothing here that’s going to blow your socks off or anything, but it does a good job of selling the movie as a thoroughly enjoyable historical drama filled with excellent performances. Cranston is obviously the star, but like I said before, he seems to glide through the movie with such a bounce that it not only looks educational but entertaining as well, as the best historical pics should be.

Focusing on the campaign, I like – as I just said about the campaign for Spotlight – the emphasis on educating the audience more on the real events behind the story. After all, if you’re going to make a movie to tell the story about people, events or things that really happened why not go all in? I would have liked to have seen another trailer, but that’s a small quibble with a campaign that’s otherwise quite good.