Journalism is a powerful thing. That’s something we may be forgetting in the age of click-bait and investigative reporting that’s more about shocking the public with stories that focus more on the reporter than the subject. But journalism can bring down governments and other leaders. It can positively impact society in meaningful ways. It can save and change lives. But it takes resources, resources that are increasingly in short supply as the media world continues to undergo a massive change.

Spotlight, the new movie from director Tom McCarthy, is about journalism having just that kind of impact. In 2002 the Spotlight team at The Boston Globe, a small group that reported on deep issues, uncovered the widespread suppression of allegations of sexual abuse in the Catholic Church that went back decades, bringing this all to light much to the displeasure of the church itself. The film stars Michael Keaton, Rachel McAdams, Mark Ruffalo and Liev Schreiber as the members of the Spotlight team who spearheaded the investigation. Let’s see how the marketing played out.

There’s just one poster for the film but it’s pretty solid. It’s basically a group photo of Keaton and the rest of the Spotlight team having some serious-looking discussion. It’s a little stagy and not all that exciting but it conveys what seems to the spirit of the movie, which is that it’s mostly about people talking about things. Below the title treatment there’s the tagline “Break the story. Break the silence” that speaks to how the team is uncovering long-hidden truths. Toward the bottom is “The true story behind the scandal that shook the world,” which makes it clear that this is a true story, even if it’s a bit inaccurate, but we won’t focus on that. Mostly it’s a solid poster that shows off the ensemble cast, which is a major selling point for the film.

The trailer starts out by introducing us to the members of the Spotlight team and setting up what it is they do. They’re soon on the case of the clergy abuse scandal but it slowly becomes clear this is a bigger story than anyone anticipated. But there are powerful forces that don’t want the story told.

The drama in the trailer is perhaps a bit overwrought as powerful speeches are delivered over stirring music, a conceit that may not be in the actual film. But what does come through loud and clear is that the movie is filled with solid performances from great actors.

Images from the trailer play full-screen when you visit the official website.

Going through some of the more standard sections first, the “About” section has About the Movie, which is a good synopsis of the story, The Cast, which just gives you nice shots of the major actors and The Journalists, which offers cool pictures of the cast along with the real people they’re playing, seemingly pulled from an event at the Toronto International Film Festival.

“Video” just has the trailer while the “Gallery” has nine stills from the film that include a pull quote from an early review praising the movie.

The “Uncover the Scandal” section takes you through the different phases of the investigation in a nice way, with images from the movie accompanied by quotes, all of which are sharable on the social network of your choice. It’s not super in-depth but it is a nice nod to the events that inspired the movie. There’s also a link to the original 2002 Boston Globe story that started it all.

There was some TV advertising done with at least a couple spots like this one that feel pretty similar to the trailer and hit many of the same major beats.

I also have seen some online ads being run, including promoted Twitter posts.

Just ahead of festival season kicking off the movie started to get some awards speculation, with Variety (9/3/15) saying it could finally land Open Road, the label distributing the movie, its first Oscar nomination. Much of the weight of that speculation focused on the strength of the ensemble, which all, the story says, fit into their character nicely and each bring something special to the mix.

After it debuted, essentially simultaneously, at Telluride and Venice the movie’s credentials were even further bonafide (Variety, 9/6/15), getting lots of buzz for the performances and more. That continued over the course of the next month as the film was hailed as reviving the prestige of movies about journalism with its solid ensemble and engaging story. Indeed it is kind of an oddity since, as some stories pointed out, most recent movies about journalists paint them as part of the problem, not the solution. 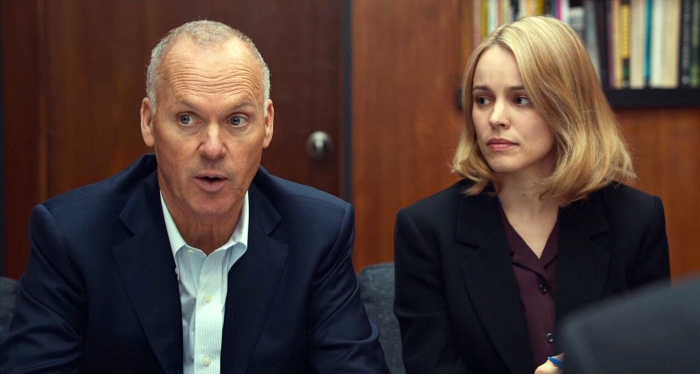 Director McCarthy would be a major player in the publicity area, talking about the importance of casting the movie, writing a compelling drama from the true story and more.

Also playing a big role in the film’s marketing were the real people who worked on The Globe’s Spotlight team all those years ago. They made the rounds of lots of podcasts and radio shows to talk about how they started their investigation, how they continued in the face of all kinds of pressure, dealt compassionately with the victims and more.

This is a solid campaign. Not only does it, on all counts, reinforce that it’s a serious drama for an adult audience about a gripping and important issue. The spotlight, for lack of a better term, is always on the cast and story, right where it should be.

It also hits one of my favorite points and that’s the notion of using the release of a movie to raise awareness of and focus attention on the real story. That’s something not many movie campaigns do but this one does that in spades. Between the information that’s available on the website to the involvement of the real people being portrayed, the audience can find out the story behind this story, which is important not only in and of itself but doubly so when it’s a movie about journalism. Nicely done.