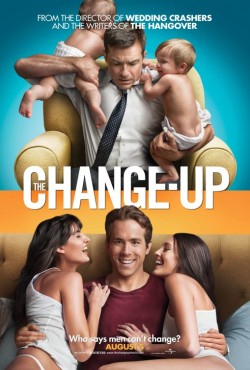 Lucky is the person who is completely satisfied with the life they’re leading. A lot of people, though, go through their lives wishing certain things were different or that their situation was changed. Even if they’re very happy there can be moments where someone wishes this, that or the other part of their lives were different. This problem can be exasperated if there’s a friend who, from the outside at least, appears to be living the dream.

That’s very much the setup of The Change-Up. Dave (Jason Bateman) is married to Jamie (Leslie Mann) and the two have a couple kids. They are happily married but have all the issues any married couple does and Dave occasionally wants to stop the world and get off. He’s friends with Mitch (Ryan Reynolds), who is on the absolute other end of the spectrum, living the single life and sleeping with an ever-changing array of women. One night while out together Mitch and Dave wind up switching bodies and Mitch has to navigate Dave’s life as a married lawyer and Dave Mitch’s as a swinging single.

We’re clearly not on high intellectual ground here, with a simple design that shows Bateman struggling with a pair of fussy babies at the top and Reynolds enjoying the company of a pair of lovely ladies at the bottom. Bateman looks exasperated and is staring longingly at the idilic situation below while Reynolds could not have more ridiculously over-the-top smile on his face. It’s really kind of a lousy design, especially with the simplistic solid colors in the background.

The first trailer for the film was a red-band version and we start off by seeing just how different each guy’s night is going. Bateman is awoken by crying babies who then proceed to poop in his face while Reynolds is awoken by the doorbell announcing the arrival of another hook-up. The two then meet for the bar and compare their lives, with Bateman living vicariously through his friend’s sexual exploits. The two drink too much and then while defiling a fountain they wish they had each other’s lives. A flash of lightening later and their wish has been granted. When they start taking on each other’s responsibilities, though, they find things aren’t quite what they expected on a number of fronts. The trailer ends with a naked Bateman running into a room talking about the freckles he has in his nether regions.

Like the poster, the trailer shows we’re not dealing with weighty philosophical issues here. In addition to the taint joke we see Leslie Mann taking a loud, disgusting bowel movement, there’s an oral sex joke to a paralegal and lots of obnoxious complaints about the burdens of having children. I get that we’ll be on an emotional fulfillment journey in the movie but still I don’t think it was necessary to show both characters as quite such scumbags.

A later all-ages version was basically the same trailer, just with some of the more offensive language and other material pulled out.

The movie’s official website has a lot of stuff going on when you first load the front page. The top proclaims the film’s raunch credentials, showing it comes from the director of Wedding Crashers and the writers of The Hangover. Above that there’s a crawl of (presumably curated) Twitter updates where people have used the movie’s title as a hashtag.

Down in the middle of the page is a prompt to watch the latest red-band trailer and then there are things to do as you can find “Your Perfect Change-Up” by connecting the site with your Facebook account. You can also insert you and your friends’ photos into the trailer to create your own version.

Once you Enter the Site the first section of content is “Film,” which has a few paragraphs of a synopsis as well as Production Notes to download. “Cast & Crew” has biographies and career histories for the major players in front of and behind the camera.

There are about two dozen stills from the movie in the “Gallery” and “Videos” has all three trailers including the two restricted versions as well as one of the TV Spots that was released.

“Downloads” has Wallpapers, Buddy Icons and Twitter Skins to grab and then “Features” has the same couple of things that were on the front page.

The movie’s Facebook page has lots of updates on marketing and publicity activity, including TV spots and lots of photos as well as links to the features that are on the main site.

Early June would see the beginning of the TV advertising campaign with spots starting to run that played up the difference in the lives of the two guys in much the same way the trailers did, though the last half was all about how the reality of Bateman’s life was much different that how Reynolds’ bachelor presumed it was going to be. Which is to say it includes the scene of Mann on the toilet complaining about the Thai food. Further spots hit different aspects of the movie but all played up the raunchiness as much as they were able to.

Bateman and his ability to be an effective ensemble player and side-man were the focus of some press (New York Times, 7/3/11) that also mentioned his other recent movie, Horrible Bosses.

There are some funny elements to the campaign but, as I eluded to above, I’m concerned that either the movie has no humor that isn’t based around sex or poop or that the trailers are pulling out all of those elements in an attempt to sell the movie as being overly crass. The marketing is funny enough – all the actors appear to be gamely giving the material their all – but there’s so much crudeness going on that it may actually be too much. It might be so dominant a theme in the campaign that it turns people off.

The main element of the campaign seems to be the trailers and that’s where most of the crudeness comes from. The one poster is kind of awful and doesn’t really match with anything else in the marketing in terms of tone. So it all hangs on the trailers and TV spots, which will either get people exited for another in a long series of raunchy male-focused comedies or have them looking for other alternatives this weekend.

PICKING UP THE SPARE