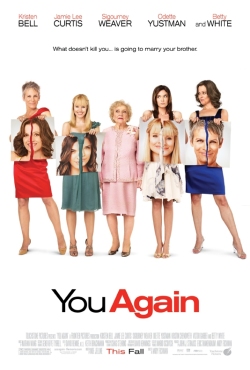 I’ll be honest right off the bat here: The main reason I’m reviewing the campaign for this movie is that I’m absolutely thrilled to see both Sigourney Weaver and Jamie Lee Curtis in a movie together. These two comediennes are some of the most talented actors of the last 30 years and have a string of classic movies in their pasts that Jennifer Lopez could only dream of. So while this movie is nowhere near my interest area otherwise, the presence of these two in addition to Kristen Bell makes it almost a must-see for me.

You Again is the story of holding a grudge over past wrongs. Bell plays Marni, a young woman whose brother is about to get married. Only late in the game does she realize his fiance (Odette Yustman) is a girl she went to high school with and who made her life miserable. As the two families prepare for the wedding more connections are revealed as it turns out Marni’s mom (Curtis) had a similar relationship with the aunt of the bride to be (Weaver). So what should be a wonderfully happy day turns into the re-airing of grievances from years past and this, of course, provides much of the movie’s comedy.

The one poster makes it pretty clear that we’re dealing with a lot of rivalries between the characters. All of them are shown here standing in a line with the photo of their rival torn in two in their hands. The only one not acting vindictively is White, who is stuck between the two mother/daughter pairs. It’s a simple poster but it gets its point across decently, making the case that the movie is worth seeing for this collection of actresses.

The movie’s trailer does a good job of setting up the story – it shows how all the characters fit together and conflict with each other through the course of the film. There’s fake niceties, barely concealed passive-aggressive tendencies and other catty behavior from all four of the leads as they old wounds are exposed to the light of the day.

It’s also designed to sell the movie as a cross-generational film, with three generations of comedians on-screen here. So not only will it likely appeal to women to whom these sorts of rivalries may seem all too familiar but it also hopefully appeals to those people who appreciate the skills Weaver, Curtis and White bring to the screen, skills Bell may have over time as well.

In “Videos” you’ll find the Trailer and three video interviews with the cast, a few of which are serious and one of which is actually from FunnyOrDie and has the leading ladies getting all up in each other’s grills.

The movie’s Facebook page has updates including promotional and marketing activities for the film and more, including photos and polls. There are also quizzes to see if you’re the ultimate Betty White fan or to see if you would, indeed, decide to go back and do high school over again if you could.

The same sort of advice can be found on the Twitter profile, which is heavily branded with Betty White’s image. And there’s a heavy emphasis on Touchstone’s YouTube page on the “Ask the Cast” videos, telling me they want to make sure the cast seems relatable and is seen as interacting and engaging the audience.

While they’re not on any of the movie’s official online outposts, there were a number of TV spots that were run, especially in the last two or three weeks before opening. They were all pretty funny and were mostly sub-set of the trailer, showing off the strongest selling point, the interaction between a bunch of really talented actresses.

Not much here aside from the usual promotional activities and tours from the cast. Most of the activity seems to have centered around the studio-produced “Ask the Cast” videos and there wasn’t much press outside of the release of various marketing materials.

The campaign works well enough for me. Again, I’m not the target demographic for the story but am for the performances by the actresses involved and so because it lets them show off what they can do it’s pretty good in my book.

White, because she’s such a pop culture phenomenon right now, gets a good portion of that spotlight, which probably wouldn’t have been the case if she hadn’t made such a splash in the last nine or 10 months. All the cast get their moments, though, and that’s good to see.