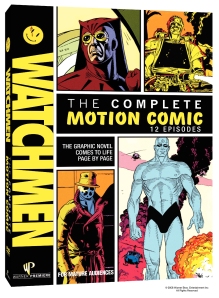 Months before the release of Watchmen into theaters, Warner Bros. – specifically their Warner Premiere division – made the first chapter of something called “Watchmen Motion Comics” available as a free download through iTunes.

The format of the video was just what is sounds like, literally the panels of the Watchmen graphic novel put in rudimentary motion and with voice work. It was quite interesting to watch but the future episodes, which weren’t released for quite a while after the first one, weren’t free and so I didn’t continue watching them.

But now Warner Premiere has released all 12 chapters on the two DVD set Watchmen – The Complete Motion Comic.

Unlike the big-screen movie adaptation there’s nothing new or altered from the source material here. Most every panel, including The Black Freighter sub-story and everything else, that appeared in the graphic novel is brought to motion. Dave Gibbons’ artwork is rendered faithfully, with moving limbs and objects being the only alteration.

It’s interesting to watch the whole story unfold like this. I can’t say it’s preferable to reading the printed novel. It’s not. But despite its exact duplication it does provide an alternate way to enjoy the story and I enjoyed it quite a bit. Occasionally things seem silly, but those are few and far between. For the most part it works and is certainly something that fulfills its primary duty as a promotional tool for the feature film.

More than anything, this “version” of the story makes it seem filmable. It’s one thing to look at the amazingly dense graphic novel and say it can’t be translated to film. But this does just that, without any interpretation. The five hour running time of the 12 episodes is just about how long the movie would need to be told. It doesn’t seem like so high a hurdle. While watching it hasn’t impacted my feelings about that feature film, it does make me view the opinions circulating around its making differently.

The two-disc DVD contains only one special feature, a 10-minute featurette on the making of Warner Premiere’s next DC Comics animated feature, Wonder Woman. There’s no finished footage in the segment (which is a bit surprising) but instead it’s made up of cast and crew interviews, with rough sketches from the film giving a glimpse of what it will look like as well as plenty of background on the history of Wonder Woman in the comics.