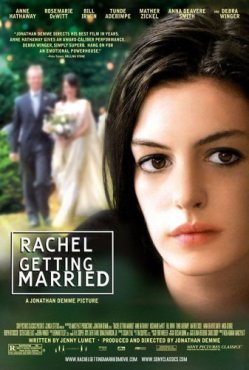 There’s a black sheep in every family, and their stories often make for some interesting movies. You can range from overly comedic like, well, Black Sheep, the Chris Farley/David Spade flick from 1996, to ones that are more dramatic and which dive into how families relate to each other and how that one member that sticks out changes the relationships of every other member.

Firmly in the second category is Rachel Getting Married. The movie stars Anne Hathaway as a young woman with a troubled past involving drug abuse and a variety of other self-destructive behavior. She arrives back at her parent’s house to be part of the wedding of her older, more respectable and responsible sister. Her arrival, full of “look at me behavior” and a bad case of “saying everything that pops into her head” disease, causes ripples in the blessed event and causes everyone to change their own behavior. That, of course, leads to the drama that will propel the movie.

Only one poster was created but it was a pretty good one. The one-sheet shows a close-up of a very emo-looking Anne Hathaway (you can tell because she’s not smiling like she is in her more upbeat movies) that’s in focus while the background image of someone walking down the aisle in a wedding gown is blurred and out of focus.

The poster’s design does one thing it needs to do very well, and that’s present Hathaway’s character as being slightly outside what’s going on with everyone else. The depth of field in the picture accomplishes that nicely. But it does not overcome one of the problems with the film’s marketing, and that’s the problem of the audience assuming that Hathaway plays this character Rachel. That’s not the case, as we’ll see in the rest of the campaign, but when a name appears in the movie’s title and there’s a big star that’s the focal point of the campaign that’s a risk and this poster only accentuates it.

The first trailer that was released was, I’ll be honest, surprisingly good. Dramas about dysfunctional families are nothing at all new, but that sucks you into this one is Hathaway and her performance. She seems to have thrown out all the cutesy schtick that has allowed her to glide through so many performances in light rom-coms and family fare, and by that, I mean more than just changing her looks. She also seems to be throwing her whole weight (all 86 pounds of her) into fully inhabiting this familial black sheep, someone who is blamed for so many woes, requires so much coddling and is a self-described force of destruction in the sea of tranquility.

The plot is nicely described and shows the situations Hathaway’s character finds herself in, which is the big wedding of her older sister. We’re introduced to those two characters primarily since it seems to be their relationship that has the most conflict and therefore the most drama. The mother, played by Debra Winger, probably gets the next biggest chunk of screentime, because you can’t have sisterly problems without there also being issues with their mother. The father, played by Bill Irwin (who parents will recognize as Mr. Noodle’s brother, Mr. Noodle) is given just a handful of reaction shots and the rest of the family is virtually non-existent. That’s alright, though, since Hathaway is the real revelation here.

The movie’s official website starts out with the ability to watch the trailer or to visit the movie’s Facebook page.

Over on that Facebook page there’s a decent amount of content, ranging from the film’s poster and trailer to a handful of stills. There’s also a note about the debut of the poster on Glam Media’s Movies blog. But that’s about it and there’s not a very heavy presence there.

Back to the official site, the first section there is “The Film.” There you’ll find a pretty good Synopsis, a Director’s Statement from Demme on the shooting, production, and casting of the movie that’s very interesting to read, two sets of Production Notes and a Seating Chart that acts as a cast list. You’ll also see here a link to the “Gallery” that contains a couple dozen stills from the film, all presented in a modal display as zoom-ins.

“The Cast” and “The Filmmakers” both run through the players in front of and behind the camera and give you their histories and accomplishments. “Musicians and Friends” gives you some background on the people providing the music in the movie as well as the friends of the cast and director that stepped in to play partygoers and others in the film.

“Media” contains Videos and clips of the film’s Soundtrack. Under Videos you’ll find the trailer as well as video clips of interviews with the cast and crew on the story and the shooting of the film.

You’ll see some honest-to-goodness links to outside websites under “Links and Reviews.” The Links section links to Wikipedia and/or IMDb pages for some of the major cast. Reviews is empty for now, but I’m sure it will be populated once reviews start coming in.

Finally, “Showtimes” links to the Moviefone page for the film and shows you when and where you’ll be able to find a screening if you’re interested.

There’s been a bit of online advertising that I’ve seen around and about on the web, most of it highly targeted and on the sites of serious movie lovers. More accurately, sites for lovers of serious movies, which this one seems very much to be.

A good portion of the film’s publicity came from its appearance at the Toronto Film Festival, something that resulted in it getting a good amout of positive buzz. All the major players, Hathaway, Rosemarie Dewitt and Demme were there and you can read the interviews they did with Spout’s Karina Longworth at those links.

It’s a small campaign but it’s a small movie. I think Sony Pictures Classics has put together good, even-tempered campaign for the film that plays to its strengths – dialogue and performances. There’s only the one poster, the one trailer and a couple of online presences that don’t have a ton of content, though the official website is better stocked than those of a lot of bigger movies. Instead it’s relying greatly on word-of-mouth and critical praise to propel it forward.

But while it’s smaller scale in terms of volume it does a great job of communicating what’s important about the movie and should prove attractive to most of the people who are keeping the independent and smaller movie market alive.