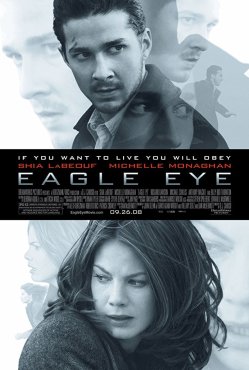 Mistaken identities and shadowy figures are often used as plot contrivances in movies and other stories. The example that springs to mind most regularly is Alfred Hitchcock’s North by Northwest, where Cary Grant gets mixed up in a bit of intrigue and is sent around the country by characters mostly never seen but always lurking in the background. He continues to insist that they’ve got the wrong man when they track him down on the telephone but never fully convinces anyone.

A similar plot is used in Paramount’s new release Eagle Eye. The movie, starring Shia LaBeouf and Michelle Monaghan, follows the two of them as their put in one situation after another by someone who continues to call them on their cell phones.LaBeouf is motivated by the fact that he’s been setup with the police by these figures and Monaghan by the fact that they’ve threatened her children.

The movie also has echoes of previous films like The Conversation and Enemy of the State (both with Gene Hackman), continuing their themes of the populace always being under some form of surveillance by the government or by others with more questionable motives. But this one is, to the best of my recollection, the first to be set fully in the mobile phone era. Enemy of the State was released in 1998, when cellphones were becoming popular but were still far from ubiquitous. Eagle Eye, though, allows those pulling the strings to be in more or less constant contact with those pawns they’re moving around the board.

Let’s dive into the marketing of the film.

There was only one poster created for the film and it brought with it even more memories of Enemy of the State since it mimics that one pretty thoroughly. LaBeouf and Monaghan appear on, respectively, the top and bottom halves of the poster with their faces clear but with smaller images of them in motion around their heads.

Between the two images runs the title treatment, which contains the copy point “If you want to live you will obey,” explaining that these two are going to be taken on a chase of some sort by those wishing to control their actions.

It’s a good poster for what it’s trying to achieve, which is banking on the (still relatively new) star-power of LaBeouf to see if he can open a film on his own, without the benefit of giant effing robots or Harrison Ford reclaiming the fedora and bullwhip. That copy point is really the only way to convey “under surveillance” without veering toward being too on the nose with something like an image of someone with a pair of binoculars. I’m not a huge fan of the half-and-half images like this but what else are you going to do?

The first teaser trailer begins by presenting LaBouf’s character as just another work-a-day schlub, someone who just wants to hit the ATM and get some cash after taking public transportation. But all of a sudden that trip to the ATM shows he has $750,000+ in his checking account, something that seems extraordinarily odd to say the least. He then heads back to his apartment, only to find it filled with weapons and bomb-making materials. He gets a call saying the FBI is about to raid his place and that he’s to flee, which he doesn’t.

Sure enough, the SWAT team moves in and takes him under arrest. Even in custody he’s contacted by the mystery woman on the phone, who alerts him to the fact that a crane is about to break through the window and allowing him to escape, which he does. The trailer ends with him jumping out the window and into the movie’s story.

The first full trailer starts off with LaBouf playing poker before winding up in the same situation, receiving the call, being arrested and then escaping. But then we seem Michelle Monighan is having the same thing happening to her, receiving odd calls implying her son is in danger and therefore involving her in this mystery. The two come together and try to survive the games that are being played with them while Billy Bob Thornton plays the Tommy Lee Jones role of investigator who’s alternately chasing them while trying to figure out what the bigger picture is in all this.

The movie’s official website opens with the full theatrical trailer, but you can skip it if you want to. Surprisingly, there’s no site to enter after you bypass that trailer, with the visitor being taken directly to the site’s content areas.

First up, of course, is “The Film.” In there you’ll find a brief Synopsis that is focused primarily on the stars and the talent, specifically LaBeouf. The description of the film is alright, conveying the plot pretty well to those who might not be up on it. There’s also bios and filmographies for the Filmmakers and Cast, most of which follow the usual format of outlining their past and other such topics.

“Video” contains the Teaser trailer, the Theatrical trailer and the Escape from the FBI sequence, the one with a construction crane crashing through the window of the room LaBeouf’s being interrogated in. I’m a little disappointed there aren’t some TV spots here, but I guess that’s a small gripe.

There are a scant six images in the “Gallery”, practically nothing. There are more in the Photos section of the Yahoo Movies listing for the film. Also a bit disappointing is “Downloads,” which contains three Wallpapers and just six IM icons you can grab.

Finally along the top navigation menu is “Experience” which is also linked to at the bottom of the page via the cell phone that keeps expanding and folding up as you mouse-over it.

“Experience” is a full-featured interactive game that puts you in the role of the person being manipulated by those mysterious figures. You receive calls on the cellphone (more accurately the Sprint cellphone) containing instructions on what to do in order to survive. You’re then given the choice between doing what you’ve been instructed to or trying to make some attempt at escape. As long as you go along with the instructions being given you can, at set intervals, receive access to extended clips from the film. It’s kind of a fun game and reminds me a lot of the old-school games like Hitchhiker’s Guide to the Galaxy and other such titles where you had to type in what you wanted your character to do and then were told by the narrator what transpired.

There’s also the much-hyped Free Fall, which brings you even further into the movie’s experience. After you sign up you begin receiving instructions, both on the computer and on your cell phone (you have to enter your number to play). Your main goal is to convince an “operative” that’s already been activated but who is trying to flee to turn around and return to the task that’s been assigned to him. It’s more than a little engaging and quite entertaining. The ending basically leads into the movie, showing that not only are you under their control now but that others have been activated, including the two that we’ll see in the movie.

While the two games are quite good they do show where most of the effort went to in designing the movie’s online presence. That’s understandable, but I would have preferred there be a bit more put into the movie informational content than into developing two games that overlap in a number of ways. There could have been an attempt to combine the two, or decide which one was stronger and do that instead of splitting the effort. But aside from that there’s nothing to complain about, and if you’re into these sorts of things it will be very interesting to you. I’m curious to know whether or not I’ll now get a call from the mysterious woman telling me to go see the movie or something like that, which I could easily see happening.

There was a serious advertising push made for the movie, including a pretty extensive online campaign and a number of TV spots, including during the series premiere of “Fringe,” which was hyped as coming with limited commercial breaks.

Along with the earlier Tropic Thunder, Eagle Eye was one of two movies Paramount plugged into a new ad unit on Facebook that featured a banner ad containing a video that people could then comment on.

Paramount also partnered with Millennial Media on a mobile campaign called the “Eagle Eye Mobile Challenge.” If you were out in Times Square earlier this month you also saw a billboard for the movie there, one of what I would presume to be many outdoor ads for the film.

In one of the savviest moves I’ve seen in quite a while, Eagle Eye was the sponsor for free Wi-Fi at the San Diego Comic-Con. Specifically, Paramount did it to promote the movie and an online tie-in game called Free Fall that launched about a month after the event. Giving geeks free stuff like this is a great way to build some goodwill and word-of-mouth. I liked this a lot, especially since they coupled it with an exclusive clip at a special page just for the event.

There’s also been the usual round of press and publicity involving the stars, though nothing to especially note.

Paramount has put together a pretty good campaign for the film, though its high-tech premise only comes through in the marketing occasionally, mostly in the two games that are featured on the website. The trailer has an inkling of it, but that’s mostly just flash.

Despite whatever might be lacking from the campaign, there is a strong brand consistency that runs through it. The trailers, the website and the posters all carry the same brand messaging and the same look and feel, bringing the movie a singular message for the audience to be exposed to.

There are some notable omissions – I could have used a more fully-featured website and maybe a teaser poster or something to set the stage – but there’s nothing about what’s been produced that I can rightly point out as flawed or anything. Solid push for the first high-tech thriller of the fall season.

PICKING UP THE SPARE