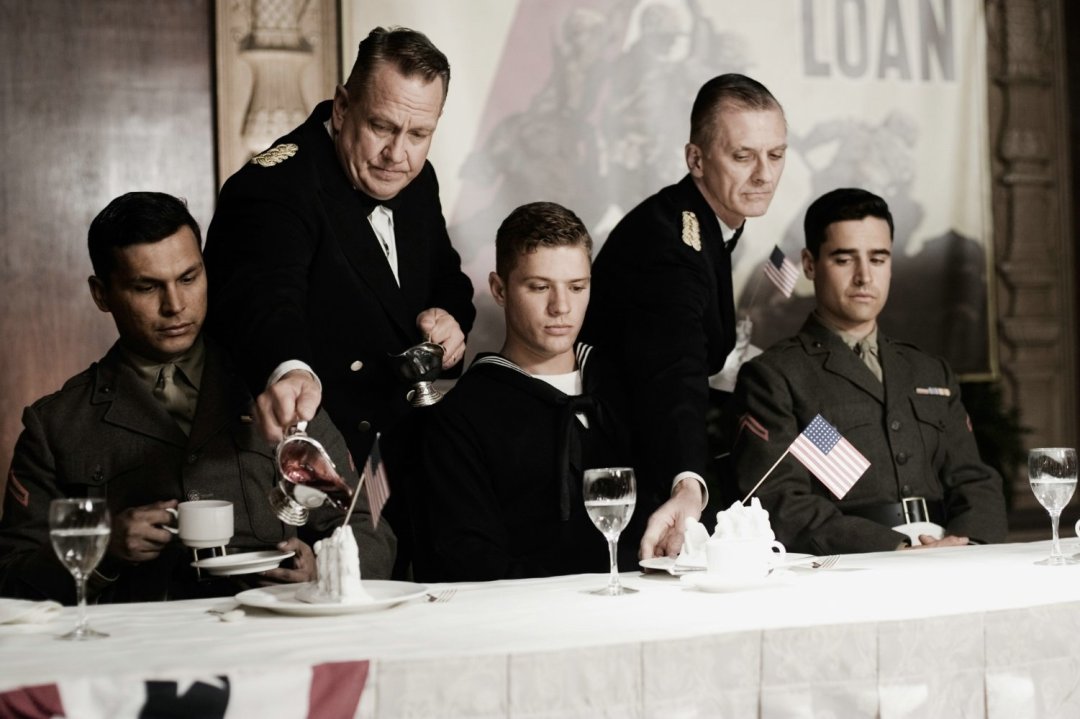 When Clint Eastwood makes a movie, at least when he’s done so for the last 15 years or so, it’s always an event. They may not always be the best movies in the world but they are always tight, ensemble pieces featuring some of the best actors around and they always are at least grasping for more, something exceedingly rare in today’s film world. I use the 15 year number because that’s where, in my opinion, late-era Eastwood began. That’s when Unforgiven was released, a movie that was a classic as soon as the first reel started spinning. What I love about this phase of his career is that he’s obviously at piece with who he is, who he’s become as an artist and what kind of films he enjoys making. So he does that, while pushing the boundaries of those things at the same time. It’s fun to watch.

His latest, the film that brings us here today, is Flags of Our Fathers, the story of the American invasion of Iwo Jima in World War II. Specifically, it’s about the soldiers immortalized in the photograph showing them raising the American flag above Iwo Jima. Those soldiers are enlisted in a propaganda campaign by the military to get people to buy war bonds and generally rally the American spirit as the war drags on.

It’s impossible to talk about Flags of Our Fathers without also mentioning Letters From Iwo Jima, a second film Eastwood shot concurrently that tells the Iwo Jima story from the Japanese persepctive. The movie was intended to be a companion piece to Flags but someone at the studio has decided it’s better to split the two up, releasing Flags now and Iwo Jima sometime around February of next year. Apparently the logic is that two films that could be Oscar contenders would drain resources for campaigning and not allow the studio to make as much of a push for both as they could for just one. I think that’s unfortunate.

What do you do when your movie is about the photograph taken of American soldiers raising the flag atop Iwo Jima? You recreate just that photo on the poster. That tactic doesn’t land itself to a tremendous amount of originality but it does make the image very striking and emotionally resonant. Of course that’s assuming any decent percentage of the audience is going to be able to connect that image with actual history, which might be too big an assumption to make. But for those who know the story behind that image it’s very effective, especially with the washed out color palette that’s used. If the image weren’t quite so crisp, with fine and definite lines, it would remind you of black and white newsreel footage. That’s one minor quibble out of the two that I have, the other being the gathering clouds in the sky above the soldiers. It’s a tad overly dramatic, almost too Jerry Bruckheimer-ish. The image works well enough on its own, we don’t need to be hit over the head with the message, at least most of us don’t.

The trailer starts off with an off-screen narrator telling us that the right picture can be a powerful propaganda tool for use in influencing the public’s opinion toward a war. Right there I’m blown away. The trailer has stripped away any pretense of war being a glorious calling which all must rally to. Instead, however necessary it might be, war is a tremendous burden for everyone, especially if, as in the case of World War II, the public is being asked to sacrifice so much in order to supply the troops for success. THAT’s what I love about Eastwood films. Oh sure, the end goal might be noble and justified, but the road there is filled with human beings who have questionable motives, are at least a little selfish and who just want to be left alone to live their lives. In about four lines of dialogue the emotional tone of the movie has been set. Wow.

After that we’re shown Iwo Jima and the iconic picture actually being taken amidst troop movements and deployments. We see the man who took the photograph being asked by someone if he captured that moment and him saying yes but then lamenting that he wasn’t able to see their faces. The focus then shifts to the soldiers as they are first asked if they’re the ones in the picture, with at least one of them expressing his desire to not be fingered as participating. The picture has struck such a chord with the American public, though, that they are eventually recruited to tour the country to rally spirits, encourage people to buy war bonds and generally reassure people that the fight is worth the sacrifices they’re making financially, materially and personally, with sons and husbands being sent off to war and dying. This doesn’t sit well with some of the men making the rounds and we see it taking an emotional tole on the.

It’s an enormously powerful trailer, all the more so because it doesn’t pull any punches. Spinning the story for the public is just as important to a war’s success as taking a particular hill.

Yowsa. While there’s nothing on the main site, once you “enter the site” and get to the full thing it’s quite visually striking, with a full-screen replication of the poster image. Nice start.

As for the rest of the site, let’s dispense with a few things right off. “Trailer” is what it is, “Photos” contains a number – a surprising number in fact – of stills from the movie and “Downloads” has six desktop wallpapers and nothing else.

Ok, that’s out of the way, now let’s get to the good stuff.

The “About the Film” section is truly spectacular. Here’s how it breaks down:

There’s also a link to buy the book the movie is based on.

This is a great campaign. It’s bold and upfront about the point of the movie, which is that PR is as important to a war effort as are guns. I don’t know what to say, the poster is great, the trailer is likewise and the website is a textbook example of how to do historical movie’s websites right. Solid effort from start to finish.