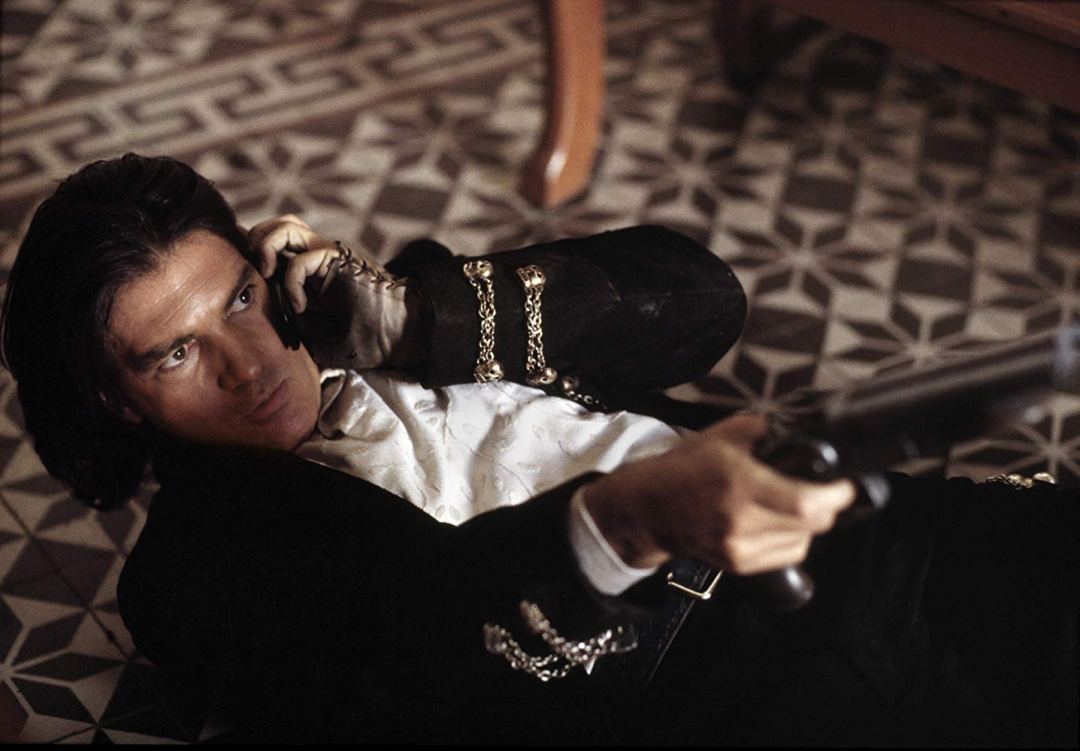 Chronicling Once Upon A Time In Mexico

I’ve really been looking forward to this one. I saw Desperado when it came out and thought it was just a hilarious action movie. It had a much better plot and sense of humor about its own ridiculousness than most of the other “action-comedy” movies out there. Steve Buscemi should have been nominated for an Oscar.

00:01 – Anyone remember the one crossover pop hit for the Gypsy Kings? I remember when their video was actually airing on MTV years and years ago.

00:02 – Oral traditions are a part of ancient cultures I always admired. The passing down of stories and legends from one generation to the next was what gave them their sense of place in the world, one we don’t have much of these days.

00:04 – Salma Hayek has been cast as a stripper in two movies, Dogma and From Dusk ‘Till Dawn, but I can’t decide which one is hotter. Dogma had the whole bubblegum chewing cheerleader thing but Dusk had the entire atmosphere going for it. This decision may take a while and involve multiple viewings of the scenes in question.

00:05 – Anyone else still wondering what was in the briefcase in Pulp Fiction? I’m sure this is well known information at this point but I’m not well connected enough to be in on it.

00:07 – I had never seen Touch of Evil until I saw the Player. Fred Ward talks about the long opening tracking shot in the middle of a long opening tracking shot. Realizing this made me go track down the movie. And thinking about Fred Ward always makes me think about Remo Williams: The Adventure Begins. One of those great always-on-cable-in-the-eighties movies. He learned how to dodge bullets way before Keanu Reeves needed CGI to do it. Ok, now I’m rambling.

00:08 – I can’t read a note of music, despite singing for a dozen years at school. Always drove my music-major friends nuts. That was fun.

00:10 – What? No cameo by Quentin Tarantino? All I ask is for him to pop up and tell one horrible joke. Is that too much to ask?

00:12 – Mickey Rourke is in this movie. Excellent. Meteors don’t fall to Earth as fast as his career took a nosedive. Is he going to be acting here or is this the credits for the gaffers?

00:15 – A fairly restrained Johnny Depp. I’m reasonably certain every career move Depp makes is guided by his not wanting to wind up in a “21 Jump Street” reunion television movie.

00:18 – There are lots of times I’ve wanted to kill a cook at a restaurant, but never for a meal being too good.

00:20 – I’d love to visit Venice. Only problem is I’d keep expecting Harrison Ford to pop up out of a random manhole cover at some point. I wouldn’t be able to relax the whole time.

00:23 – Big explosions in movies are fun when they’re unapologetically gratuitous. It’s when they’re done because someone actually thinks they help the story along that I think they’re a problem.

00:26 – I’m a big fan of making Reformation jokes whenever I visit a Catholic church. These tend to make everyone uncomfortable and nervous around me. Good times.

00:29 – So far this may be my favorite Johnny Depp performance.

00:31 – William Dafoe is sitting in a street café and I keep waiting for Harrison Ford to show up. Wow. Two Harrison Ford references and I’m barely a half-hour into the movie. Not bad.

00:33 – Sorry, but I think the guy on screen right now is the Mexican Burt Young. “We’re gonna punch his lungs out!”.

00:36 – What’s the point of casting Salma Hayek if only to put her in flashbacks? Still – a little Salma is better than no Salma I always say.

00:41 – I hate it when I walk into a room and women start shooting at me. Happens more often than you might think, but it never stops being troubling.

00:43 – Johnny Depp apparently was able to pick out his own wardrobe for this movie. He’s had some just fantastic outfits so far. My favorite was the purple T-shirt with “C.I.A.” in big letters. This in itself is just hilarious.

00:43 – Despite the overwhelming consensus (at last count roughly 85% of the world’s population) I do like the closure that Godfather Part III provides. Sofia Coppola’s entire metamorphosis into a respected director feels like penance she’s paying for that one, though.

00:47 – There was a great line on “Angel” recently about a guy who waited sixty years for revenge: “I know revenge is a dish best served cold, but his must have been frozen solid by now”.

00:50 – You’d think checking to make sure you put bullets in a gun would be a no-brainer. It’s just like making sure you locked the door behind you and that the dryer isn’t running when you leave the house. Just make it part of your routine.

00:54 – Not translating certain dialogue into English has probably saved a lot of movies from getting a more restrictive rating. Plus, it’s taught so many kids how to curse in languages that their teachers or parents can’t understand. It’s actually kind of a public service when you think about it.

00:59 – Five-part flashbacks, where you get just a little more of the story each time, don’t really work for me. Either show us everything all at once or use dialogue to explain what happened, but don’t be a plot tease.

1:01 – I really like that there’s more screen time given to Antonio Bandaras’ helpers in this one, even if one of them is Enrique Iglesisas.

1:03 – There was just a shot of William Dafoe’s crotch that went of for far too long. I think I need one of those eye-wash sinks they put in laboratories.

1:07 – To atone for the Dafoe buffalo-shot, Eva Mendes’ breasts just took up the entire frame for a moment or two. Why wasn’t this in the trailer? Could have pushed the movie’s box-office take into Lord of the Rings territory.

1:09 – The Mexican Day of the Dead has always fascinated me. Our sensibilities in the U.S. are so delicate we are nervous about any organized remembrance of the dead, but this is a celebration of ancestors that shows how much stronger family and community ties are in some other cultures.

1:13 – Not only does he have a great wardrobe, but Johnny Depp is also getting some of the juiciest lines. This is actually a better performance by him than Pirates of the Caribbean, I think.

1:16 – Mexican Burt Young is pretty good with guns. Couldn’t they have cast Mexican Burgess Meredith and Mexican Carl Weathers? Hey – Robert Rodriguez could just do a Mexican cast-led remake of Rocky! That would be golden! He could get Mexican Talia Shire. As long as he stops after Mexican Rocky II. The world does not need a Mexican Rocky IV.

1:17 – Every character in this movie is wearing sunglasses. Do they also wear them at night? Would they wear them if they had half a pack of cigarettes?

1:19 – Part of me wants an assurance from the filmmakers Mickey Rourke was high as a kite during filming. It would increase my enjoyment of the movie three-fold.

1:23 – I don’t know what I would use them for, but I now want both a radio-controlled guitar case as well as one that doubles as a flame-thrower. I should write this down so I don’t forget what to ask for come Christmas.

1:26 – Johnny Depp’s character has lost his eyes and I’m thinking did the scene of his murdering his father and sleeping with his mother wind up on the cutting room floor? Why isn’t it a bonus feature on the DVD?

1:28 – It’s got to be disheartening to be a brutal would-be dictator and walk into a room only to see all your men dead on the floor. Somebody should see if Hallmark makes a card for occasions like this.

1:30 – William Dafoe is walking around with bandages on his face and I am now thinking of Jack Nicholson as the Joker. This now leads to my thinking how bad I feel that Dafoe got stuck behind that awful mask in Spider-Man.

PARTING THOUGHTS – Great movie. Enjoyed this one from beginning to end. It had the same just gleeful sense of mayhem that I got a kick out of when I saw Desperado. Everyone looked like they were having fun and that came across clearly on film. Just a fun, fun roller-coaster ride of a movie.